A week ago--on a coldish January day--a small flock of robins ate all the berries from one winterberry shrub in our yard. They flew off as quickly as they arrived, after the last fruit was plucked.

Winterberry (Ilex verticillata) is my favorite native shrub, its beautiful red berries brighten an otherwise late fall landscape and the bounty of juicy berries serve as a mid-winter food for birds.

The bright red berries of our winterberry in September.

Winterberry is typically dioecious, with male and female flowers on separate plants. Only the female plants produce the bright red berries; each berry sports a small black dot. The greenish-white flowers are so inconspicuous that I often miss noting their blooms in early summer. The berries are the show-stopper, especially in early fall when the red berries are surrounded by the dark green, finely-toothed leaves or in winter set against a snowy landscape. 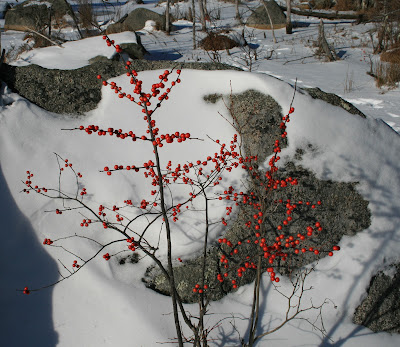 Lots of rain last fall and into early winter has kept water levels high in local streams and rivers. Despite the high water, wetlands have frozen solid due to the recent stretch of very cold temperatures. Yesterday we explored one such ice-covered local beaver pond. We heard what sounded like a flock of crows cawing from the woods above, only to realize it was the clang of our microspike-clad footsteps.

We walked around an unoccupied beaver lodge, something only possible in mid-winter. An intact skeleton of a cormorant lay among the beaver-chewed, sun-bleached lodge sticks. Our dogs Kodi and Henna sniffed about but didn't detect anything breathing inside the lodge.

As the wetland narrowed upstream, we stepped around shrubs, sedge hummocks, and uprooted trees. A few bluebirds and chickadees flitted around us. A thicket of winterberry was stripped bare of its fruits. At the base was a tell-tale sign that a flock of birds had devoured the berries: winterberry scat. Birds have an efficient digestive system and some can process a fleshy fruit with small seeds--such as a winterberry--in less than an hour. 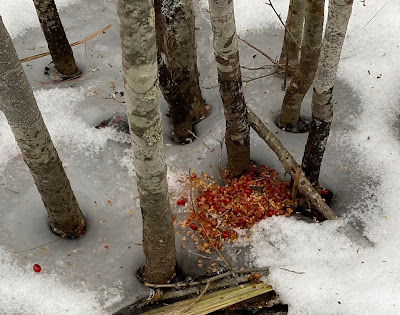 A pile of bird scat (aka poop) below a thicket of winterberry.
The contents are entirely winterberry skins and seeds.

Winterberry is a favorite addition to holiday wreaths. A local farm has started a small plantation of winterberry shrubs as a commercial source of these beautiful berries. I clipped a few twigs from our bush in December (before the bird banquet) and added them to our wreath. Just today a few bluebirds picked off all the winterberries. Happy to oblige them this sustenance on a cold winter day. 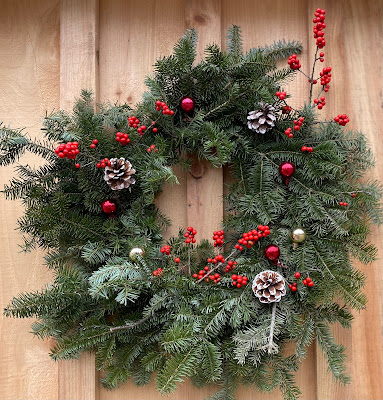 Our wreath before the bluebirds ate the winterberries.