My Dad was a mammalogist by training and profession and a natural farmer and engineer. I inherited his love of the outdoors and gardening and his common sense (I hope). I wish I also got his knack for engineering. My brother Tod got that.

Dad met Mom at the Carnegie Museum in Pittsburg, where they both worked. She worked in the Director's office, he was a fresh graduate from the University of Michigan where he did his dissertation on the field study of small mammals, his favorite of which was the eastern chipmunk.

If you are familiar with natural history museums, you know that they have rooms filled with drawers of animal skins, bones, skulls, and such. My Mom says that one day she went down to the "bone room" and asked my Dad if he wanted to go to a party. He agreed. They were the only couple to show up, so the hosts and the two of them played bridge and stayed up until the wee hours. Later, my Mom's uncle Bob said, "Are you going to marry a mouse doctor?" That she did.

We grew up in a 1760s-era old saltbox, one that my parents bought soon after moving to Amherst, Massachusetts. My Mom was likely not as enthusiastic as my Dad about the purchase; she was caring for my older brother and sister, who were less than 3 years old then, but they've been in the house nearly 60 years. Over the years Dad took pride in restoring the house to its original architecture. As kids we arrived home from school to the chore of scraping mortar off old bricks that Dad had salvaged to rebuild the central chimney and fireplaces. There wasn't much heat in the house and I recall at least one spell when the pipes froze. My sister said that is when Dad stopped shaving for good. 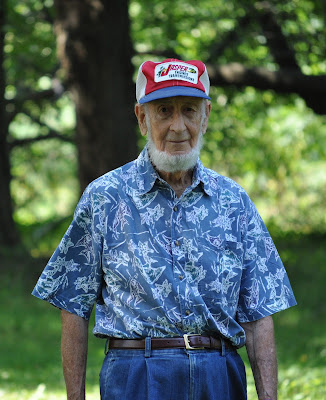 There was land with the saltbox and my parents acquired some more in subsequent years. We were always outside growing up: sledding on the mountain, catching fireflies, wandering in the fields and woods, raising animals, building roads in dirt piles for our toy trucks, camping. One of my Dad's greatest loves was working on his farmland. For many years, even into his nineties, he would ride his tractor, wield a chainsaw, or just walk the land with my mother.

He instilled in me a love of open space and the importance of protecting land and taught me my first bird songs when I was very young as we listened to warblers move through the yard in spring. In the 1970s he co-led the Amherst Growth Study Committee, an effort to restrict overdevelopment in Amherst and to protect the Lawrence Swamp, the aquifer for the town's drinking water. He was sued by a developer, but stuck to it, and helped build awareness for future land conservation. To that end, my parents were among the first to conserve their land through the Massachusetts Agricultural Preservation Program.

Besides his family and his farm, Dad loved bluebirds, homemade clam chowder, contra dancing, driving, watching the Red Sox, wolves, and ice cream with chocolate sauce (especially made by my Mom). Dad slipped peacefully away in his own bed on the farm that he loved, with his family near, and after enjoying a bowl of ice cream and chocolate sauce the night before. He had a good life.
at December 05, 2015 4 comments: