The oldest known hardwood tree in North America--at 700 years old--is a black gum tree tucked away in a hummocky swamp in southern New Hampshire in the Town of Northwood. Sometime around when Henry VII was crowned Holy Roman Emperor in the year 1312, this black gum sprouted. It grew slowly over the centuries, perhaps only a millimeter a year, surviving hurricanes and land clearing and logging and beavers and other potential threats to a good, long life.

Another black gum, perhaps as old as the Northwood tree, grows not far from my home. This morning a small group of us hiked in to stand beneath and gaze up at this black gum, a state champion big tree--the biggest black gum in New Hampshire. Its circumference is 132 inches; it reaches 89 feet in height (quite tall for a black gum); its crown stretches 58 feet across. The University of New Hampshire Cooperative Extension manages the NH Big Tree Program and this black gum is now in the record book after it was discovered last year by a local tree buff.

Black gums are long-lived, with several traits that enable this longevity. They continue to grow year after year even in deep shade, if ever so slowly. Their wide lateral root system and horizontal branching keeps them upright even during major storms. If a strong wind blows, back gums will lose some top limbs, resulting in a gnarly looking crown. The bark of old trees is thick and deeply furrowed.


Here is the big black gum of Epping that we visited this morning. 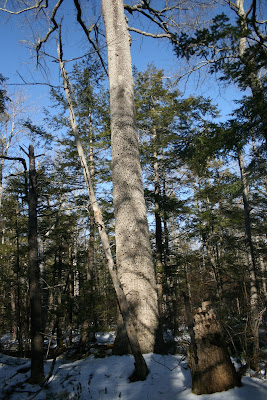 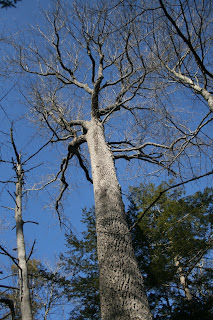 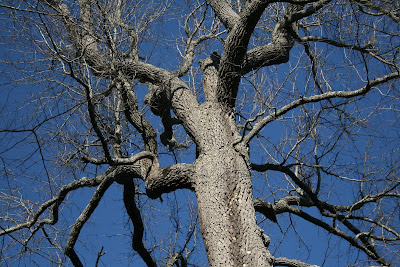 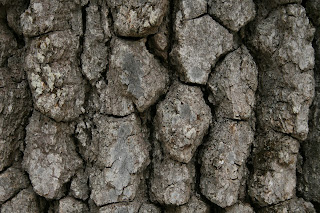 Black gums grow in out of the way places and the wood is hard to work, so they've been overlooked by loggers. The gums (also called black tupelo or Nyssa sylvatica) tend to grow in isolated small swamps, not larger wetlands and rivers, so they've been spared the sharp incisors of beavers. Wildlife do like the tree though. Porcupines make dens in the hollows that form at the base of the tree and various creatures inhabit cavities along the tall, straight trunk. 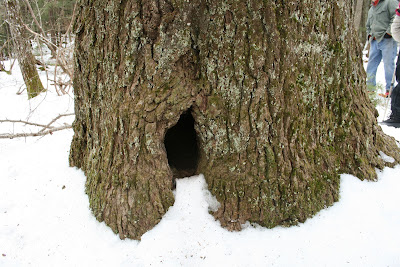 The remains of another black gum stands nearby in the shadow of the big one, decaying as slowly as it grew. 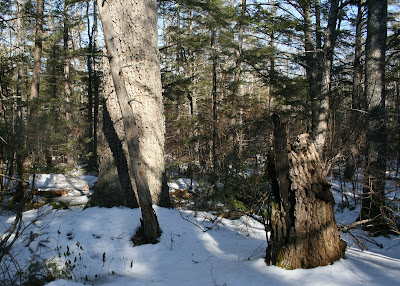 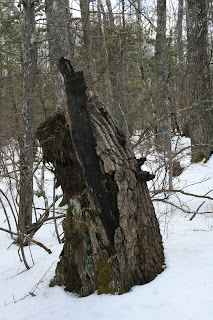 Other smaller black gums grow nearby with perhaps hundreds of years of life left in their trunks and crowns. That is wonderful to contemplate.
at February 04, 2012