I spent three hours this cold, rainy morning with 20 other volunteers pulling garlic mustard at a local nature preserve. It was fun. Our group was a mix of girl scouts, UNH sorority women, local town folk, grad and undergrads, a few high school students, including one from a town two hours away.

Garlic mustard is a weed you should know. Here in the U.S. it is an aggressive, invasive plant. As its name suggests, it smells like garlic when you crush the leaves. You can make garlic mustard pesto with it. Otherwise when you pull it don't put it in with your yard waste or compost. Keep it for a year in the sun in black plastic bags or leave it in a separate pile to compost, or put it in the trash, otherwise it will just keep spreading.

Right now garlic mustard--a biennial, which means it takes two years to complete its cycle--looks like this.... 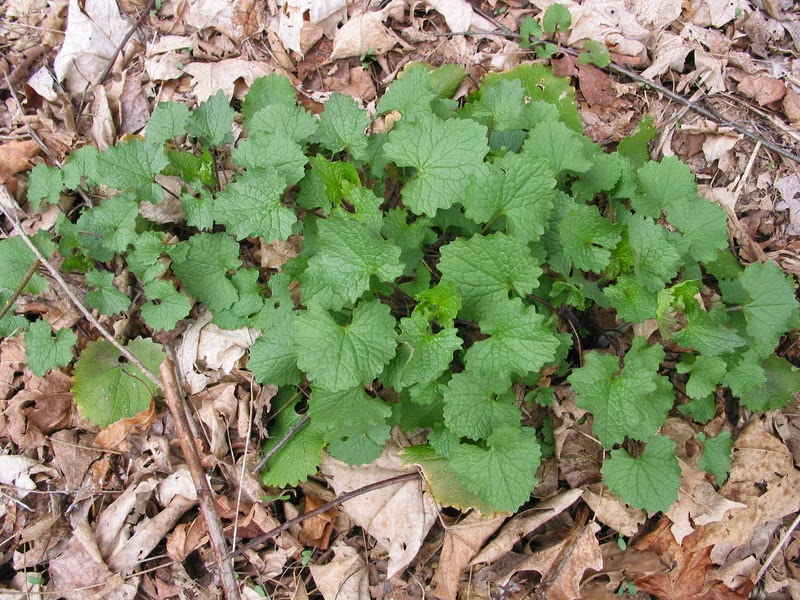 Within a week or two it will flower and look like this.... 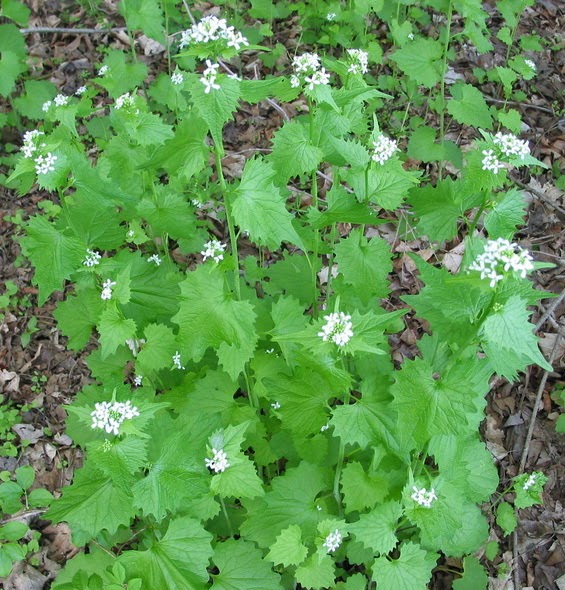 And if left unchecked, it will spread farther and farther along roads, into natural woodlands, like this... 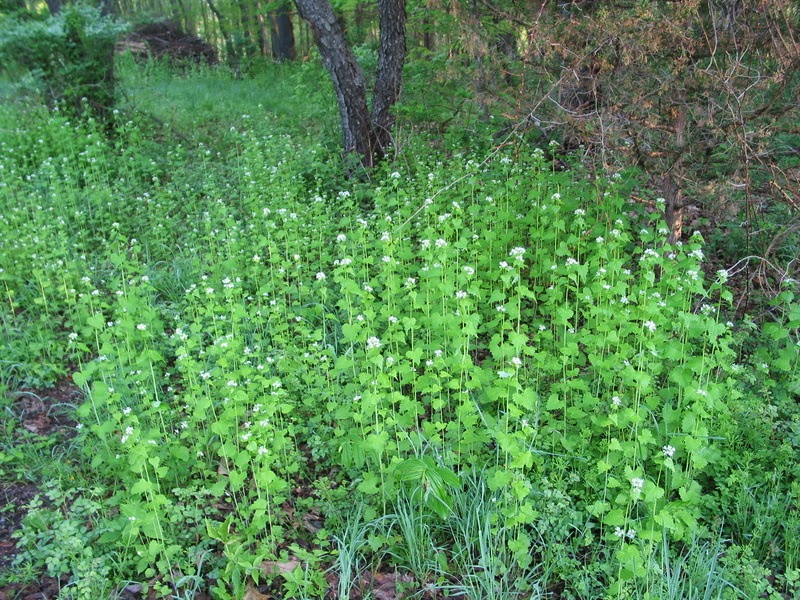 Garlic mustard gives off chemicals that prevent other (native) plants from growing and also messes with the soil microorganisms including fungi that native plants need to grow. So, groups and people across the region--in New England, New York, the Great Lakes, probably elsewhere, gather on spring days to pull garlic mustard together. This collective effort is fun, inspiring, and makes a difference in our natural areas. For more on garlic mustard check out the resources at The Stewardship Network: New England.

Here are a few pictures from this morning of the hardy, enthusiast volunteers at Lubberland Creek in Newmarket, New Hampshire pulling garlic mustard. 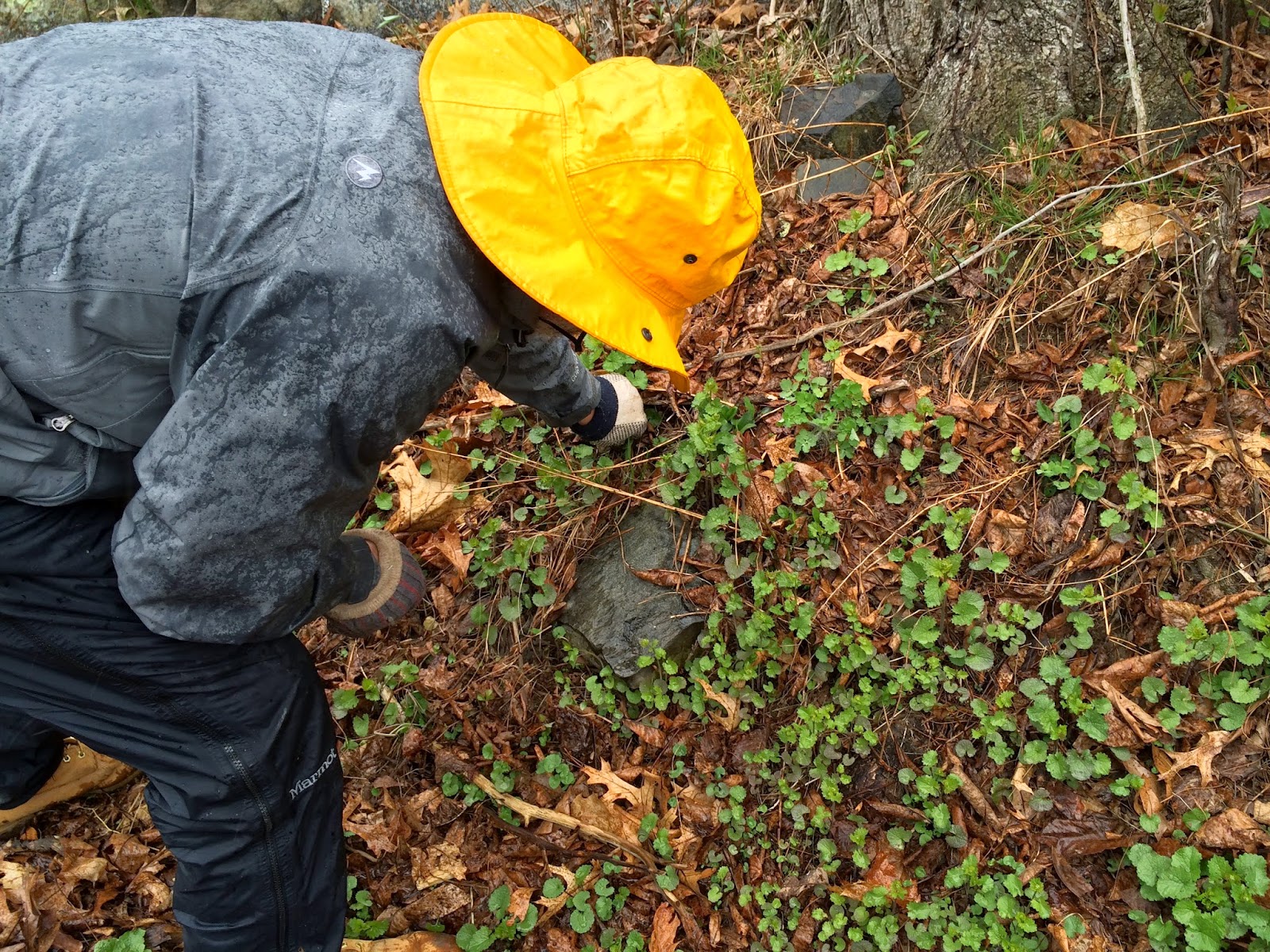 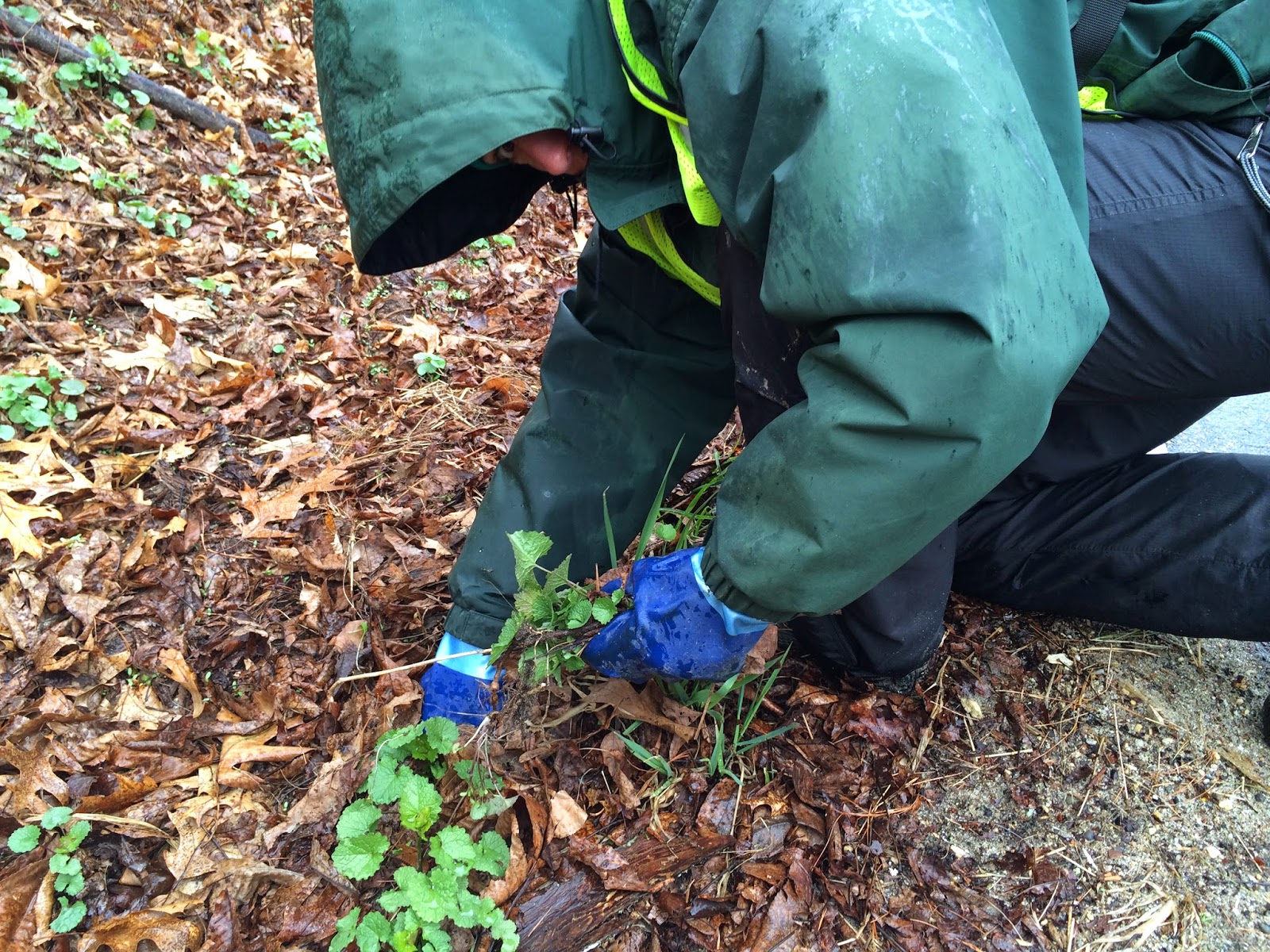 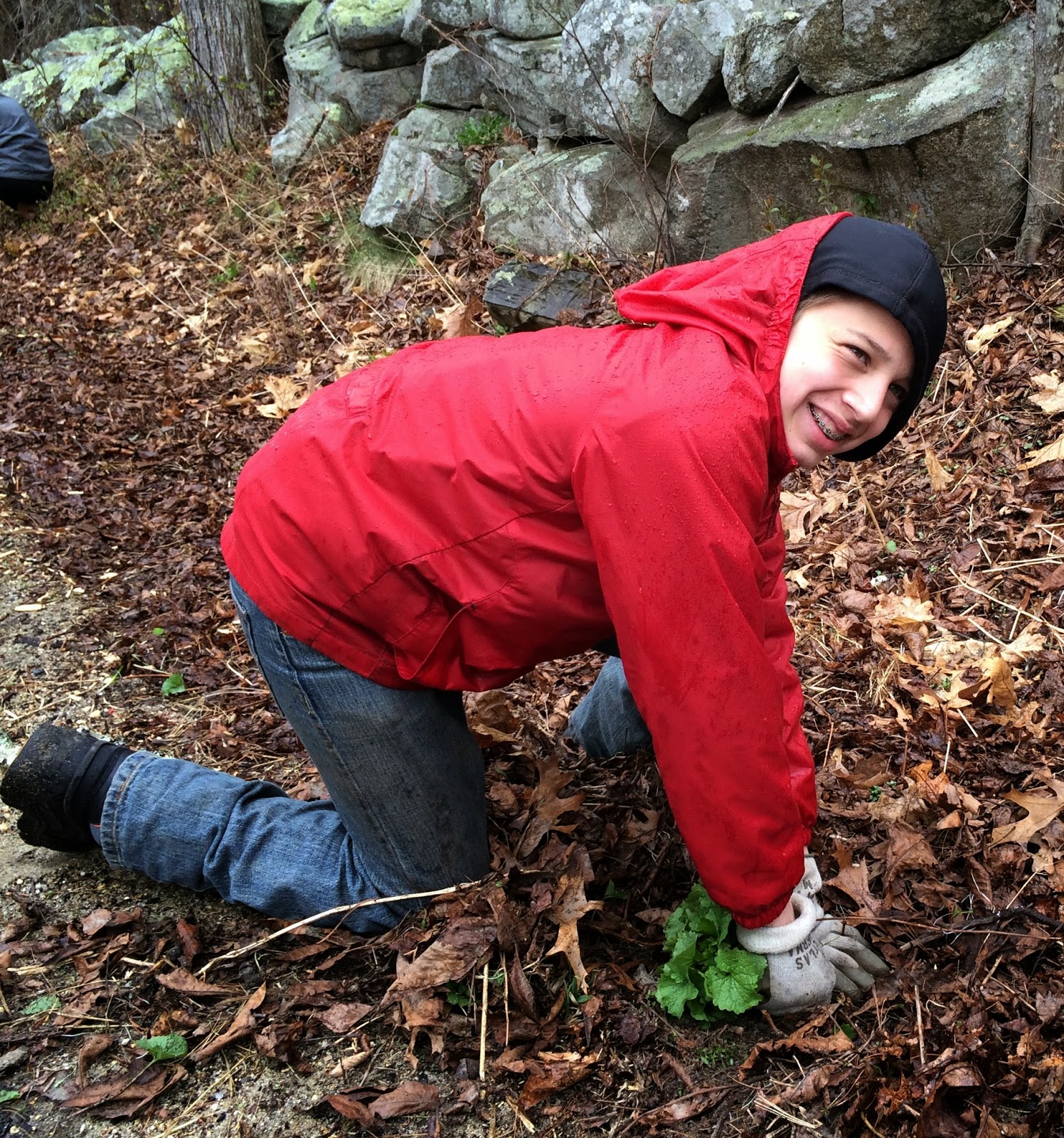 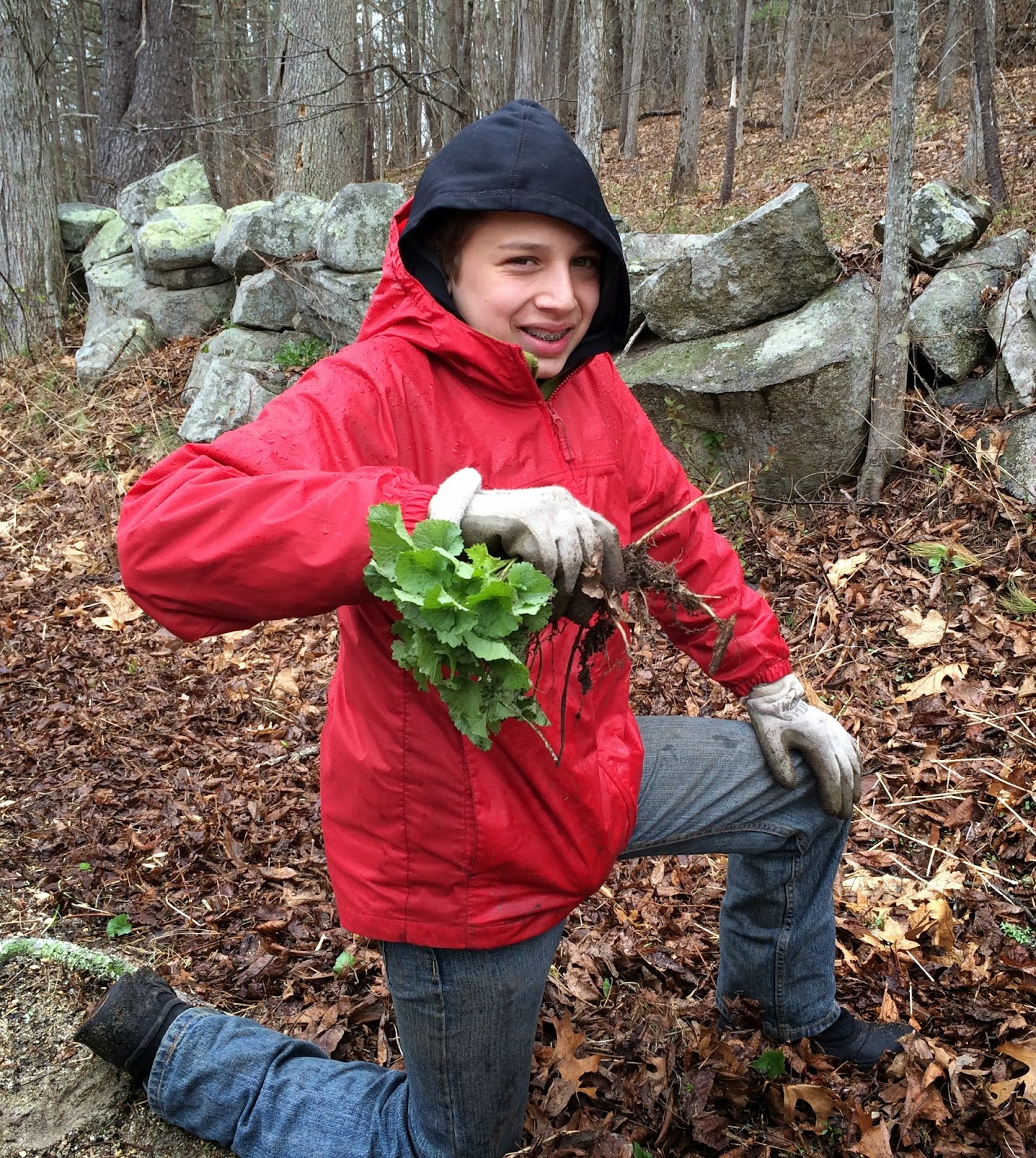 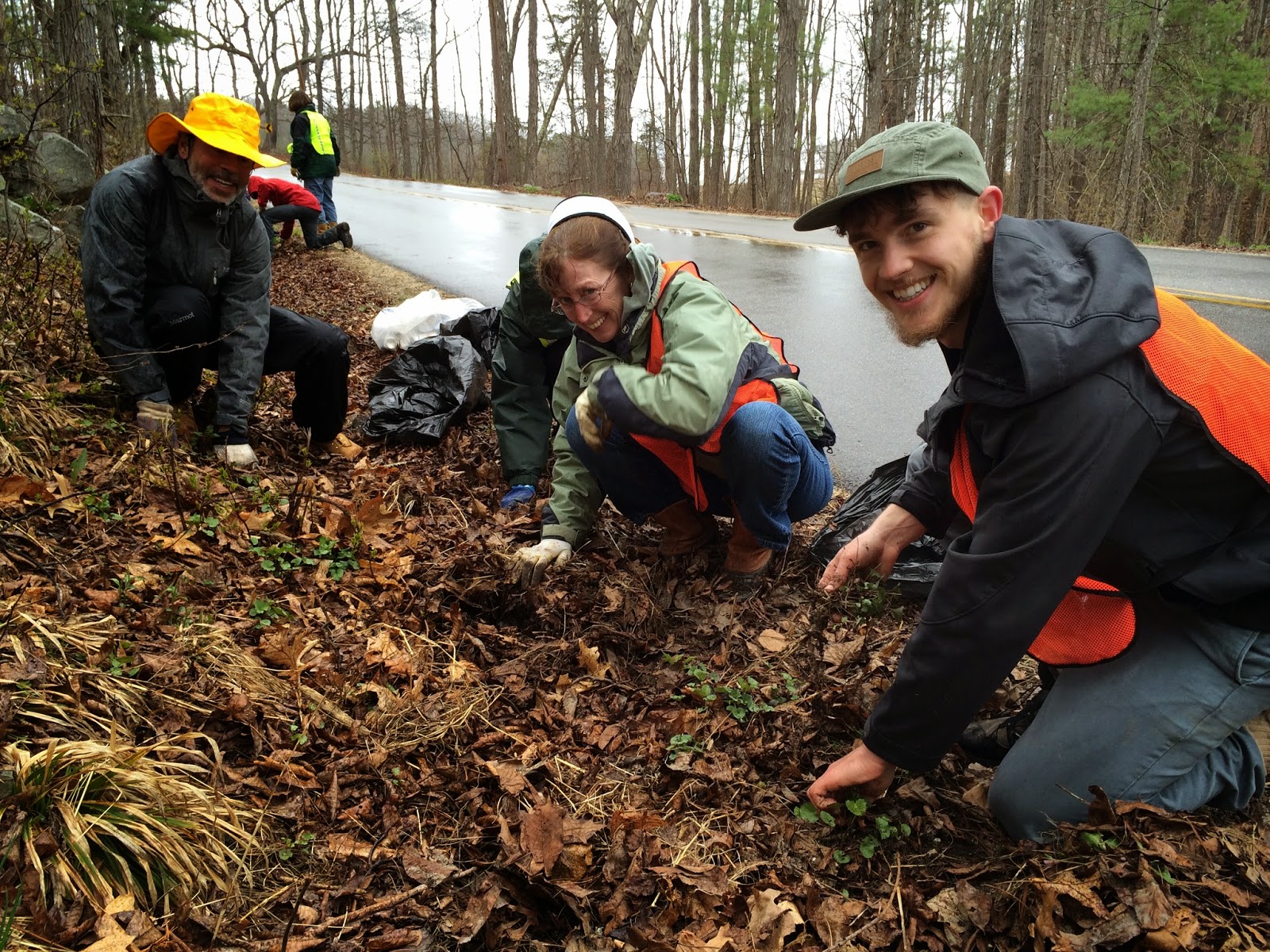 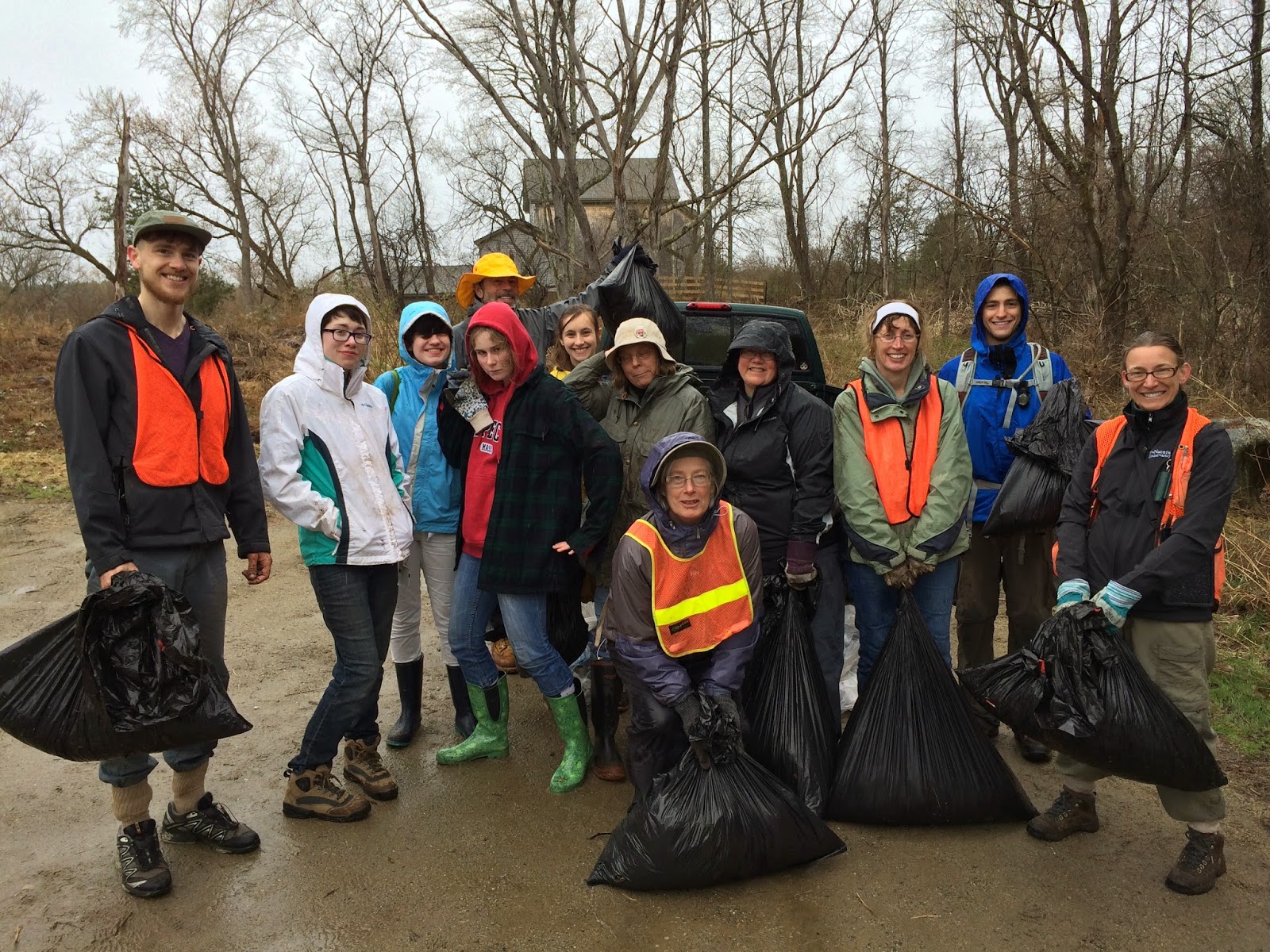 This post might be only for the naturally curious as it touches on scat and dead things, specifically that of porcupines. When I am out and about in woods, wetlands, and fields, I often see the remains of animals that died naturally or were killed by a predator or vehicle (roadkill), as well as signs of footprints, poop (aka scat), or other features.

Of course it is usually more exciting to see a live animal in its natural habitat, but many mammals are secretive or active only at night, so live sightings are uncommon. Signs of their activity or their demise are much more likely. And these signs tell a lot about an animal's behavior and characteristics, which brings us to the porcupine. 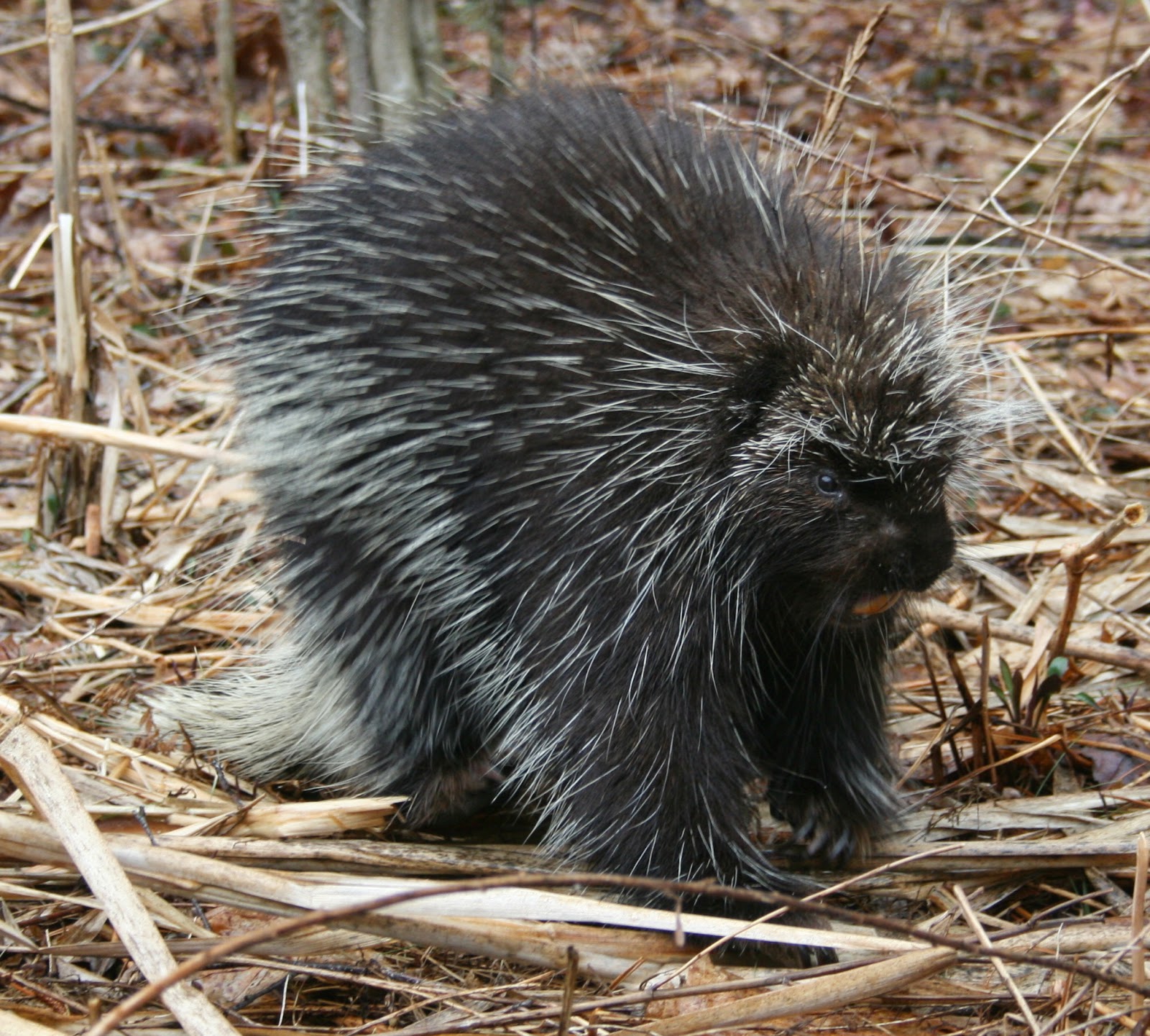 Porcupines leave lots of sign of their activities. Since they are active mostly at night, we don't often see them in action. Porcupines are slow and have poor eyesight, which leads to many getting killed on roads. Against most potential predators, a porcupine's 30,000 quills provide an adequate defense. Dogs know this well, although they never seem to learn. A few animals--including the fisher--are adept at exploiting a porcupine's quill-free zones: its face and belly. 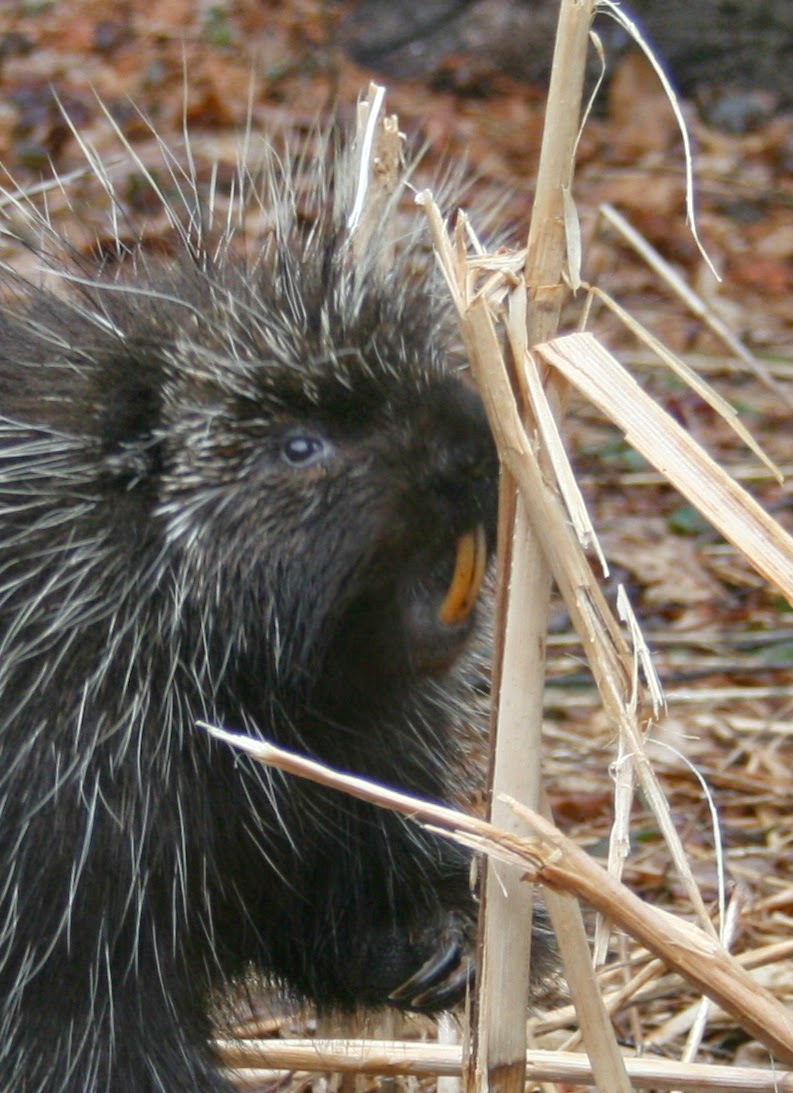 Winter is the best time to see signs of porcupine activity, as they leave several tell-tale signs: pigeon-toed tracks in well-worn trails in the snow, piles of scat at their den entrance, and clipped hemlock branches beneath a favorite tree, as seen in photo below. 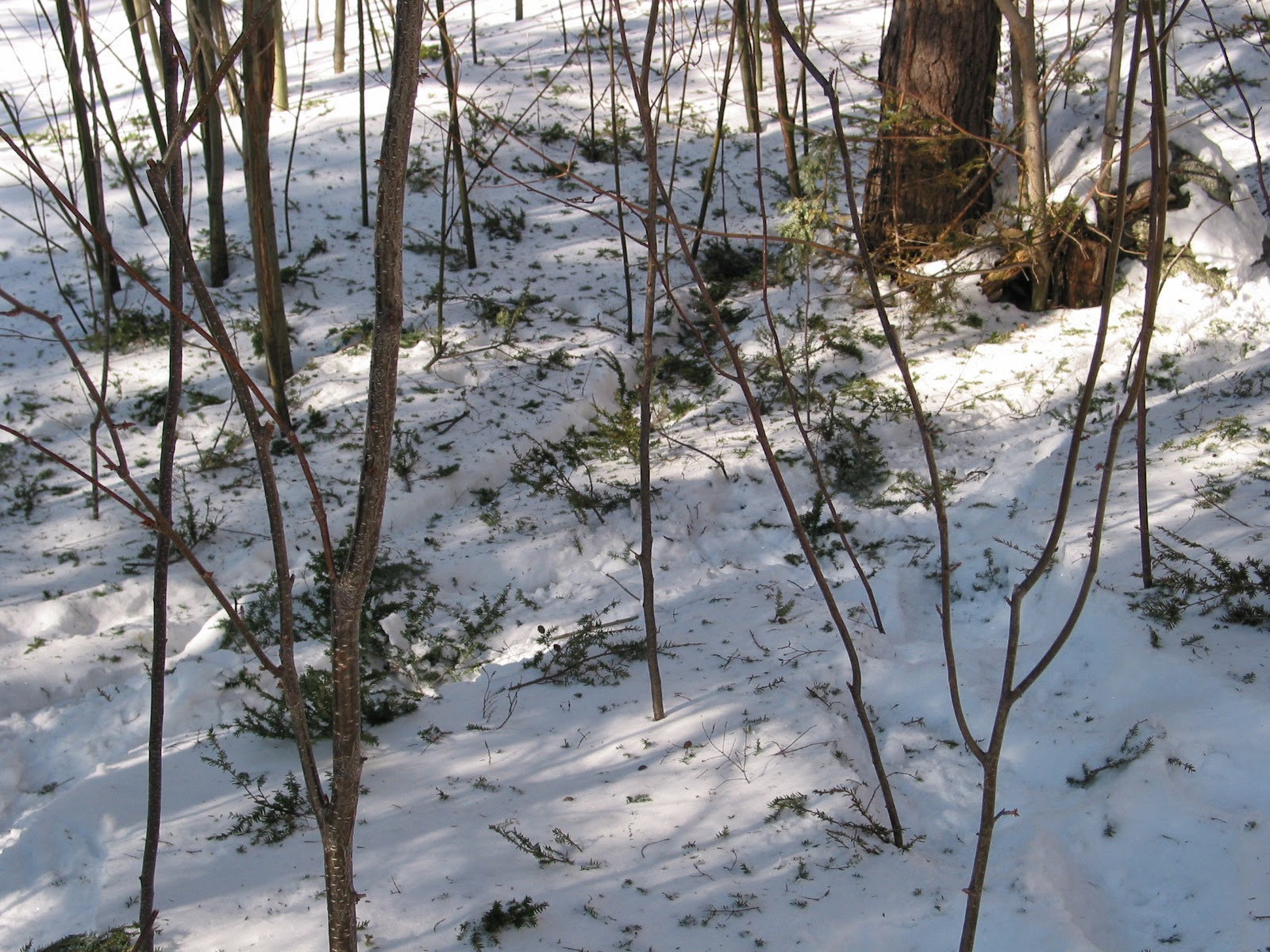 This behavior is called "nip-twigging." A porcupine perched high in a hemlock in winter, clips a small branch to reach the buds and new, tender needles at the very tips. The rest of the needle-covered branch is dropped to the ground as waste. However, a white-tailed deer finds these fallen hemlock boughs just fine for a winter meal.

As noted, porcupines are unlike most other mammals in that they defecate at the entrance to their dens. On Saturday I visited a very large den site with so much scat that the entrance was blocked. 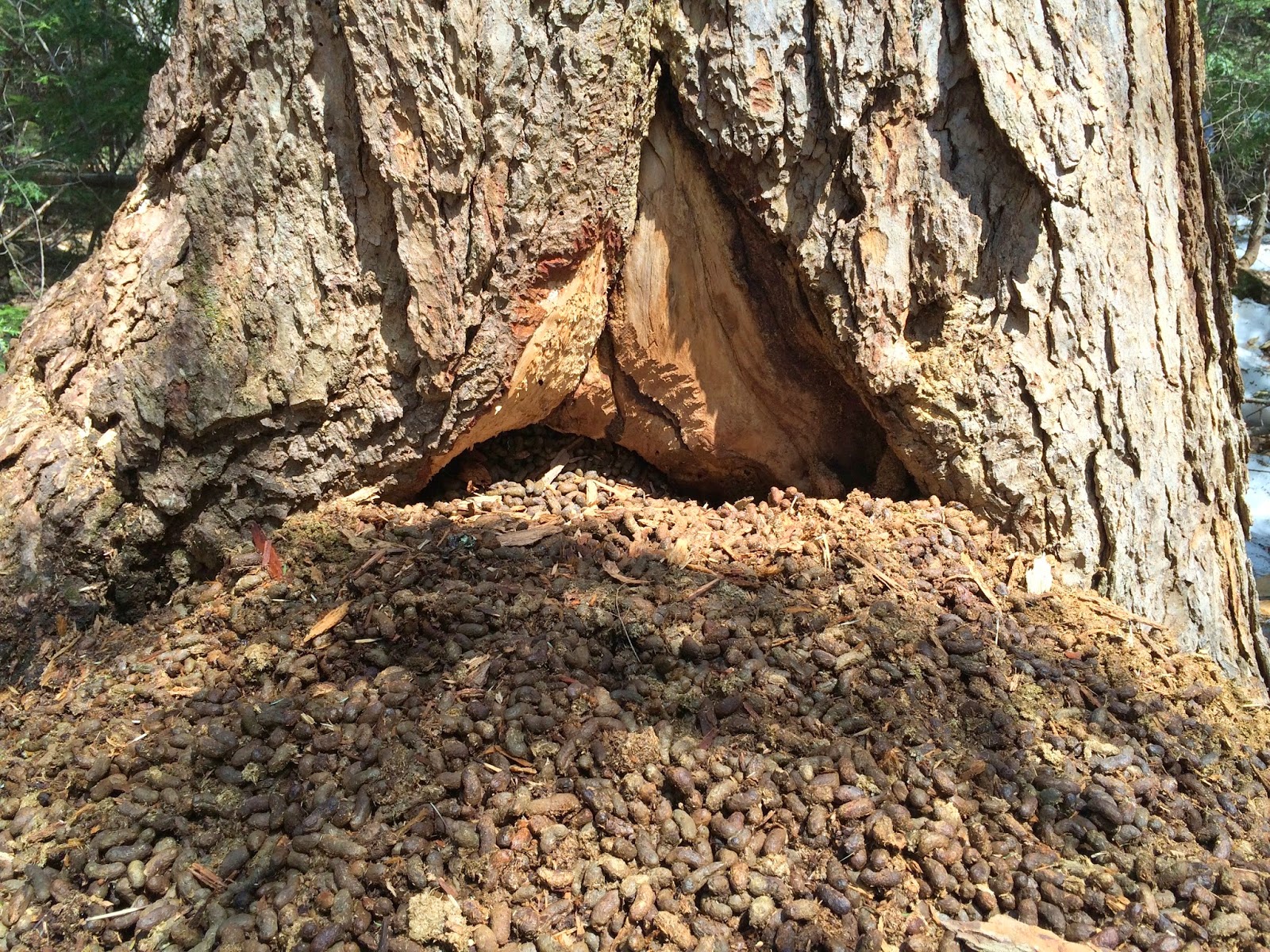 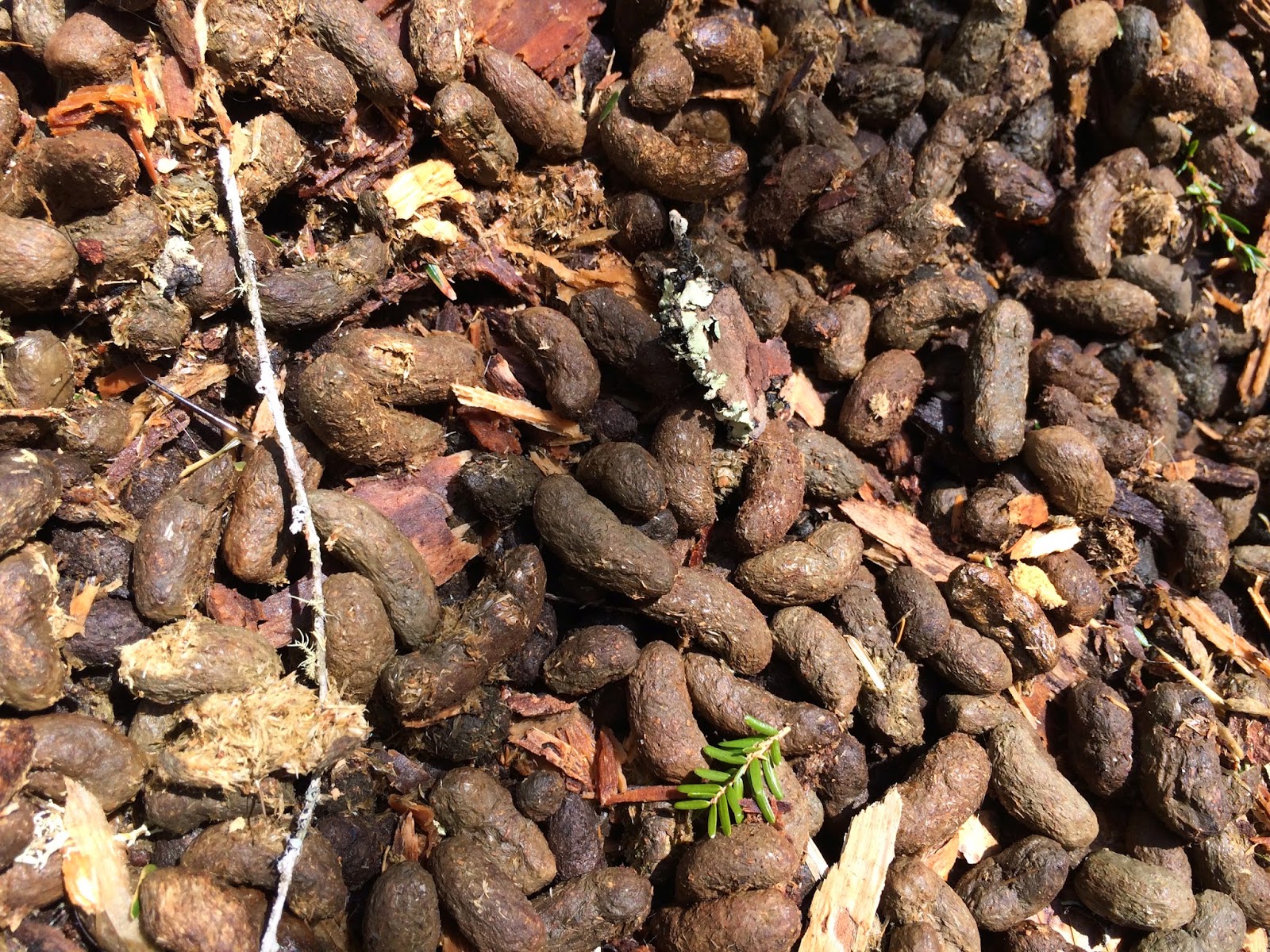 Just outside this den site we found a dead porcupine, whether killed by a predator or just died we don't know. There wasn't much left but a few parts. 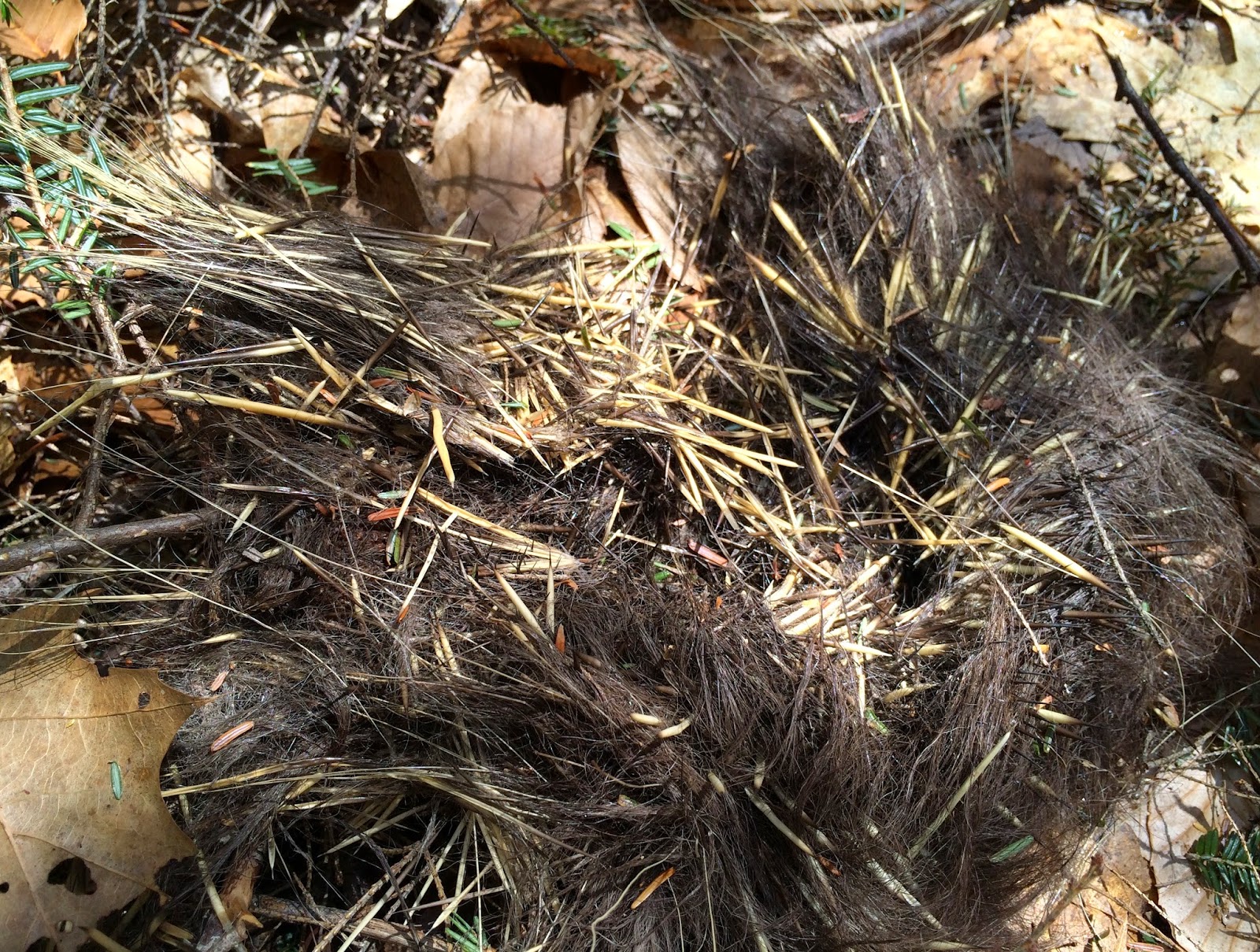 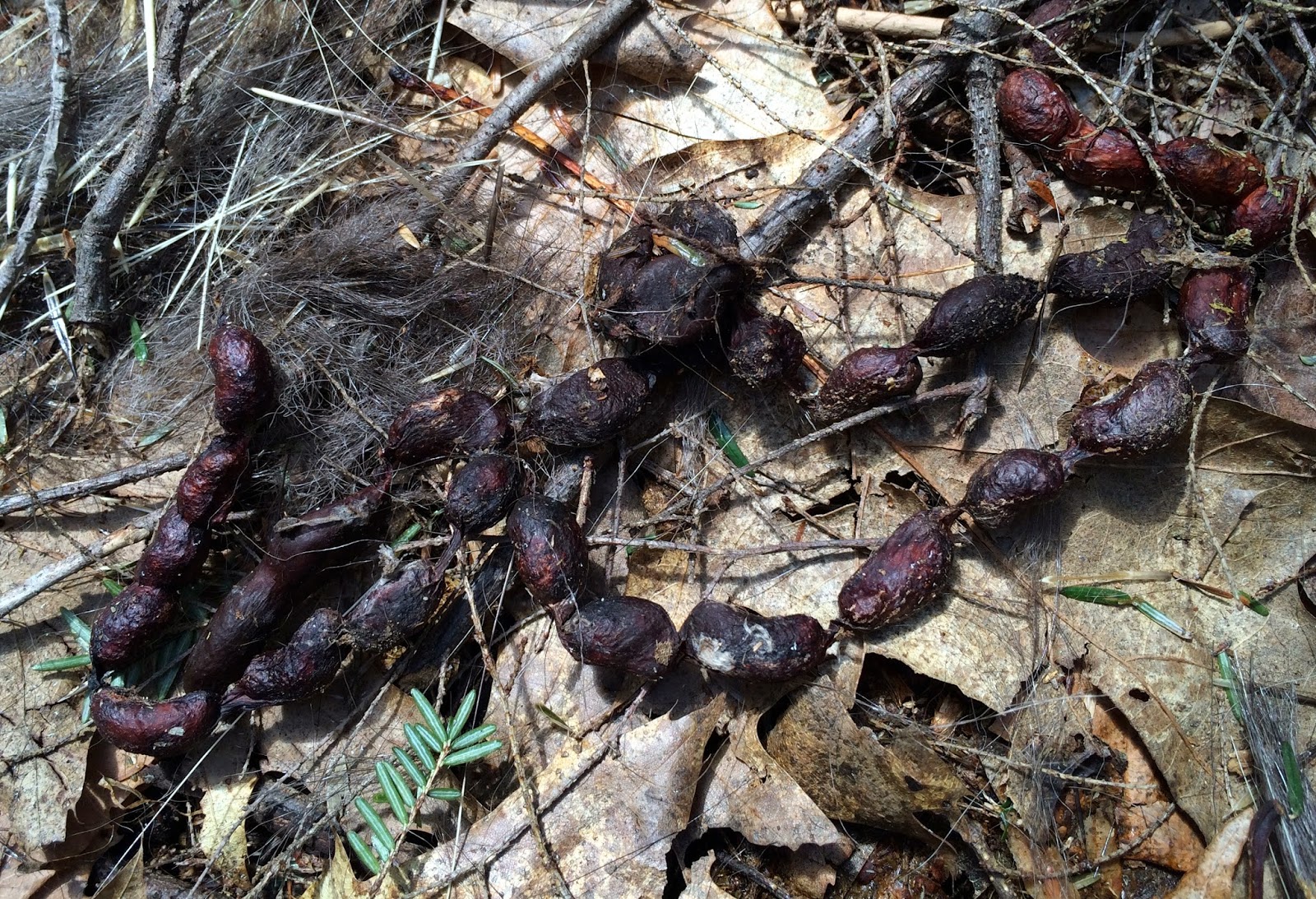 Take another look at the picture above, the one that shows a necklace-like string of, well, porcupine scat. This is the desiccated lower intestine of the dead porcupine filled with individual pellets yet to be expelled. Apparently whatever killed the porcupine or fed on it after it died, was not interested in eating the scat-filled intestine, which is all plant material. (Porcupines are 100% vegetarians, make that vegan.) I had never seen this before, so it was a great find (for those that get enthused about such things). Thanks to Vermont naturalist Mary Holland for confirming the answer to "what is this necklace?"

Porcupines are giving birth about now to one porcupette. The quills on a young porcupine harden within a few hours after birth, giving it ready protection against potential predators, except when it tries to cross a road.
at April 24, 2014 No comments:

A Good Day on Earth

I like to think that every day is Earth Day. Today though seemed like an especially good day on earth, at least for me. I planted sugar snap peas about where a painted turtle laid her eggs in our garden several years ago. I'm happy to share the space, so she is welcome back this year. I also planted cilantro and spinach and arugula. It felt good to drop the small seeds into the soil, cover them gently, then water. The next best thing is to watch them sprout; the arugula will emerge first, in just a few days.

I spent much of the day in the field--that is, out and about in the woods checking the growth of garlic mustard, an invasive plant. I'll be back there on Saturday with a volunteer crew and The Nature Conservancy to pull this invasive plant. We'll take time to listen to the returning songbirds and enjoy being outside working together on a good cause--to restore a natural area. I just hope the black flies aren't too pesky--they emerged today on this Earth Day. We saw several garter snakes today too, taking advantage of the warm sun, maybe they caught some of the flies...


A garter snake, disturbed from its mid-day bask, tries to hide among the brush

As I write this post from my back deck, I watch a female pileated woodpecker make repeated powerful strikes at a dead paper birch. I assume she got her fill of carpenter ants or wood boring beetles before flying off to find her mate. Peepers just started up their communal peeping from the wetland behind.

A few warblers returned during the last few weeks. First, the pine warbler, which is aptly named as it lives mostly in the tops of pine trees and is best identified by its somewhat musical trill. On one warmish day last week I spotted a small flock of palm warblers, with their rust cap, yellow breast, and wagging tail. Unlike the pine warblers that nest here, palm warblers head farther north to spruce bogs for the summer breeding season. Hermit thrushes with their rust-colored tails just arrived too. And of course wood frogs are quacking from their vernal pools. Things are happening in the neighborhood.
at April 22, 2014 No comments:

Silver Maple Flowers Among a Tangle of Invasives

I am spending a few days as a first-time attendee at the Northeast Natural History Conference in Springfield, Mass. Yesterday I attended a workshop on invasive plants--how to i.d. and map them. We learned about the Outsmart App (if you have a smartphone this is fun, easy, and contributes to a national database). The Outsmart folks have created several short educational videos on some of the common invasives such as glossy buckthorn and check out this invasive star-studded video.

As far as I know we don't yet have tree of heaven in New Hampshire. Despite its heavenly name, this tree grows fast and tall and is not a nice addition to the waterfront. As with most invasives it is a heavy seed producer and crowds out the natives. 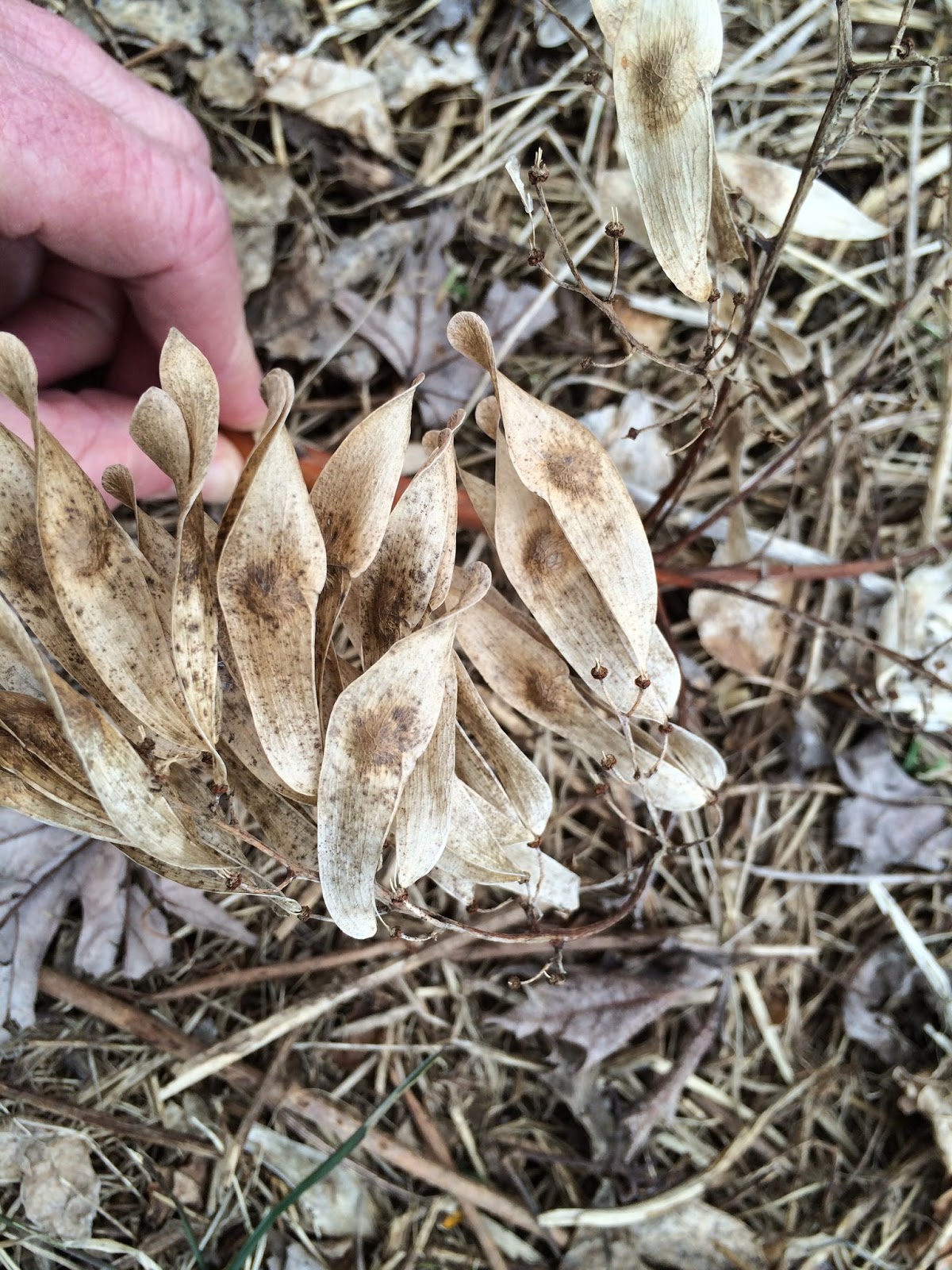 In the midst of the invaders we found beauty in one of the classic native trees of a wooded floodplain: silver maple. It's arching branches host the earliest tree blossoms--bundles of red and yellowish flowers. 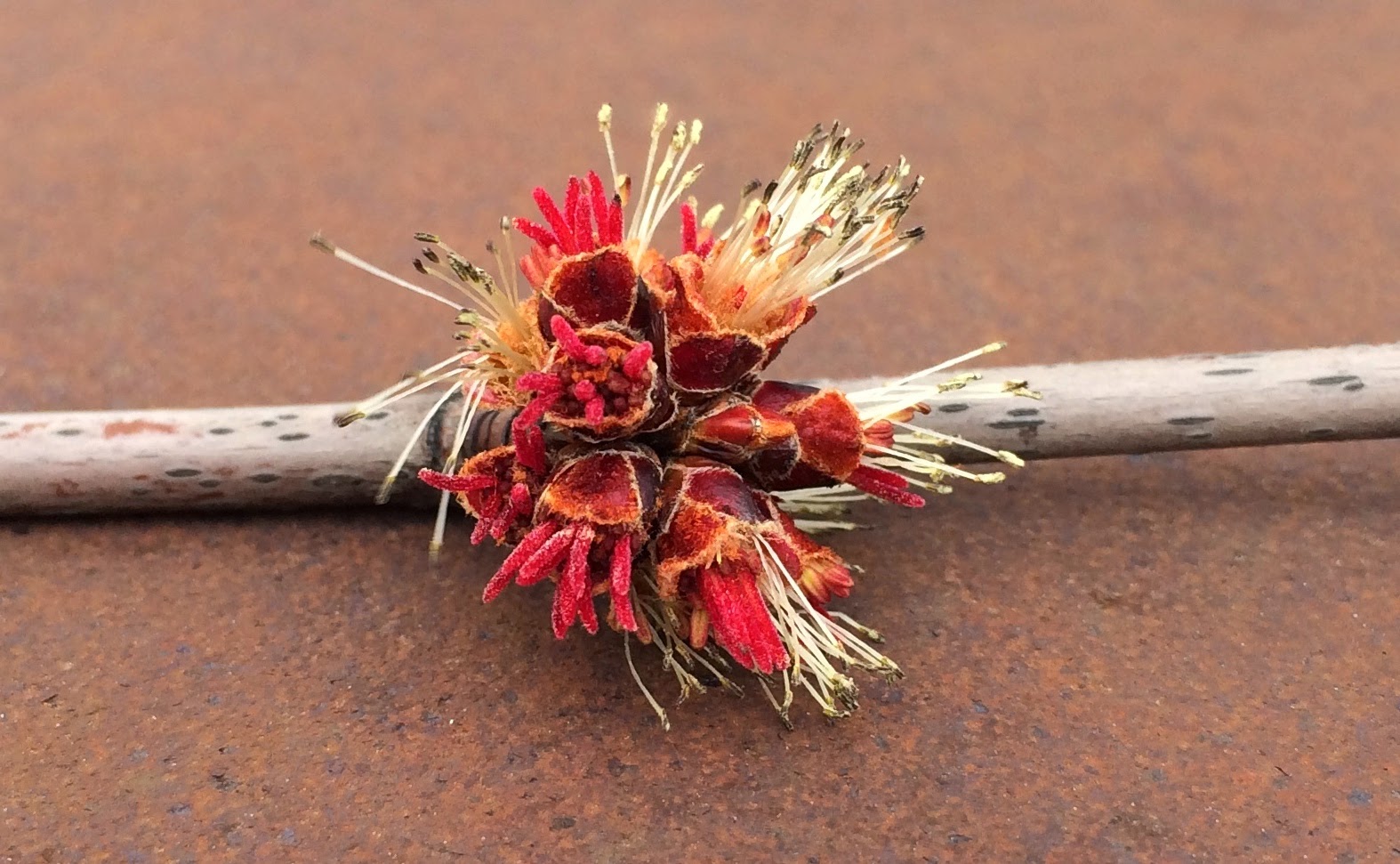 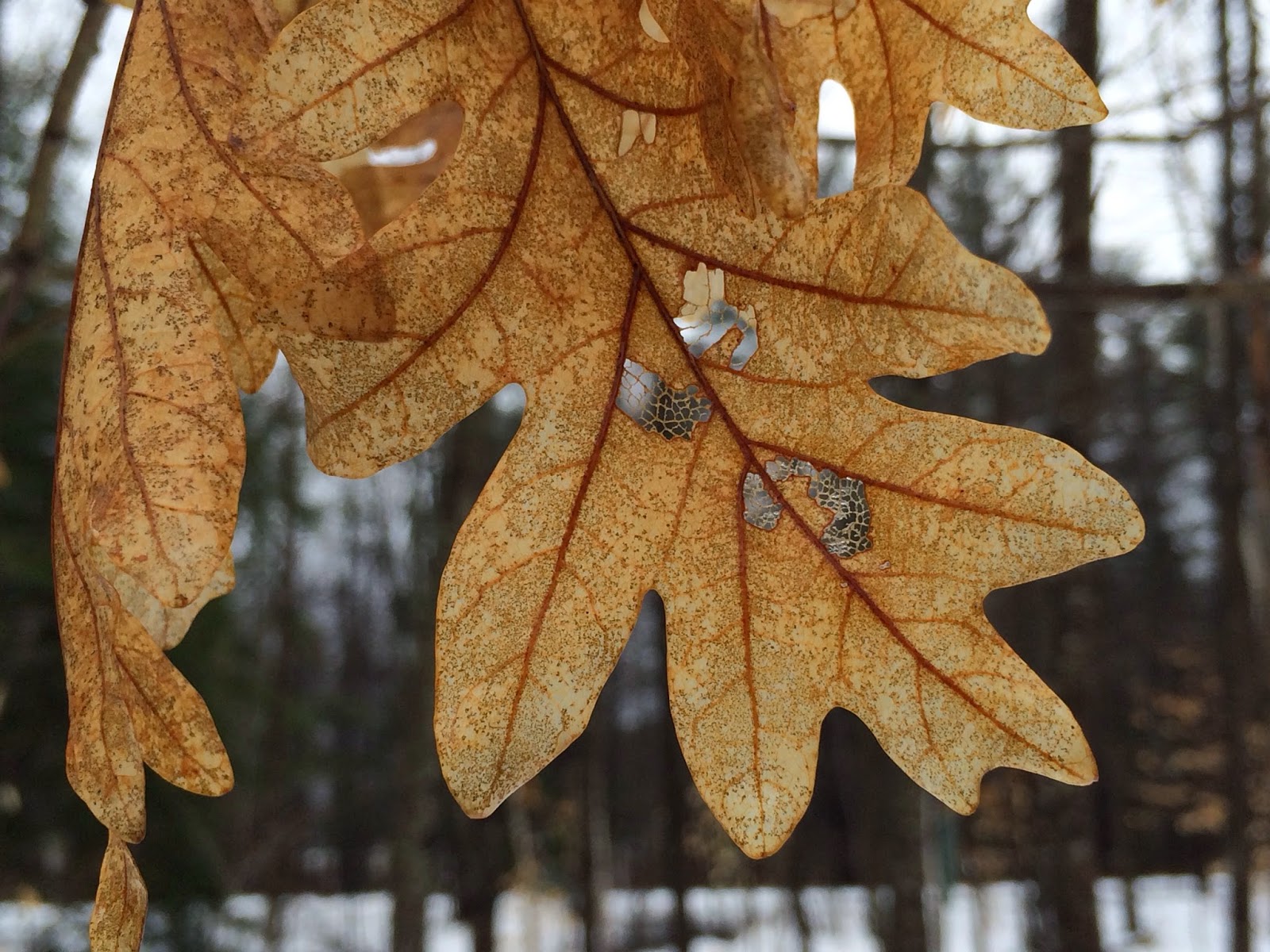 A male turkey strutted in our neighbor's yard this morning, courting two females (although they paid no attention to him) and warning other males to stay clear of his small harem. His head and neck were bright red and blue with various fleshy protrusions known as a snood, caruncles, and a dewlap. Earlier, at dawn, we heard multiple turkeys gobbling; this male clearly won over at least two females, with his colorful snood, puffed up body, and large, fanned tail.

Yesterday morning we head the first phoebe of the year; any day now one will return to our yard. This morning (when the sun was still out and it felt like another nice day--turned raw by midday) I heard several brown creepers, one of the sweetest songs of early spring. This tiny brown and white bird creeps up tree trunks in search of insects, spiraling around the tree as it climbs.

A brown creeper (from Wikipedia)

Every day now for a spell offers some new spring gift--peenting woodcock, first phoebe, singing creepers, gobbling turkeys--all sweeter than Easter candy. What is my next spring sighting...can't wait.
at April 02, 2014 No comments: