The snow is deep in the North Country. As we drove north Friday on Route 16, the snowbanks got progressively higher. Through Pinkham Notch we were slowed by a plow truck that was clearing an overnight snowfall and then waited while a tow-truck pulled a vehicle from a snowbank. The High Presidentials were in the clear, so we were hoping for same on our first-ever hike to the summit of 4,170-foot Mt. Cabot. 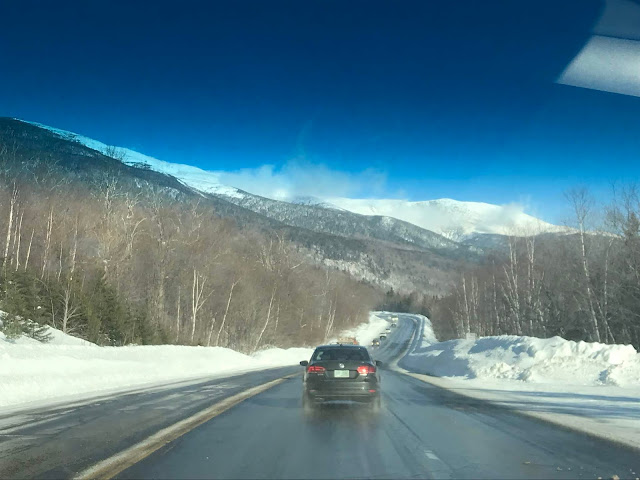 Headed north on Route 16 through Pinkham Notch, following a plow truck.
High Presidentials in the clear.

York Pond Road from Route 110 in Berlin to the Berlin Fish Hatchery and trailheads was mostly plowed, except for the 4+ inches of new snow. We got underway at 9:50 am on the York Pond Trail. The snowshoe-width trail was discernible, but the fresh powdery snow made for extra work. A young man headed out at the same time and soon passed us, breaking new trail for us the rest of the way. 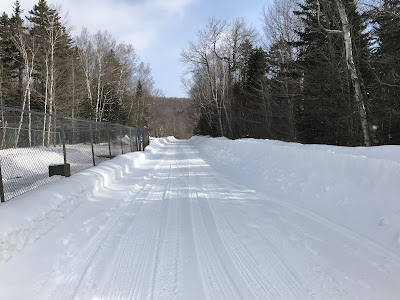 Thanks to the hatchery folks for keeping the road into these trails nicely plowed. 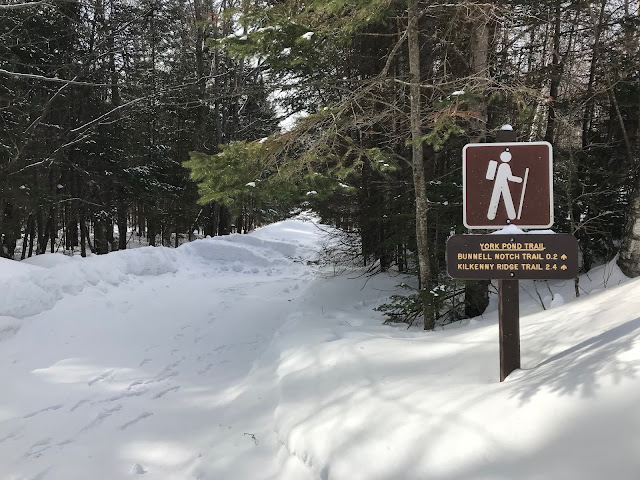 The York Pond Trailhead was also plowed out with room for 2-3 cars.

In our group of two people and two dogs, Kodi, the 11-year old, led the way at the beginning. On the way down though he made and tried to curl up in three snow nests, until we urged him on. He was ready to hop back in the car at the end of our 8.8-mile hike. His legs were tired. 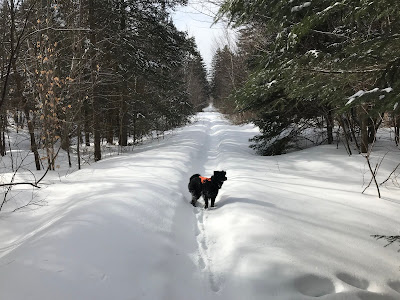 Kodi gets underway on the York Pond Trail.

Henna, the 6-year old, is a runner, so has to remain tethered, which helps pull the person she is tethered to up (Srini) and down (me) the trail. She did have one planned and one un-planned free romp. There were several stream crossings that required a steep hop across, which is tricky on snowshoes and tethered to a dog. Henna got better at it, as did we. 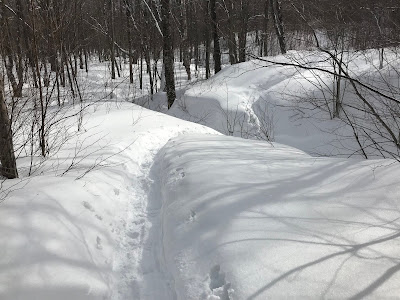 One of the small brooks that required a hop across on snowshoes. 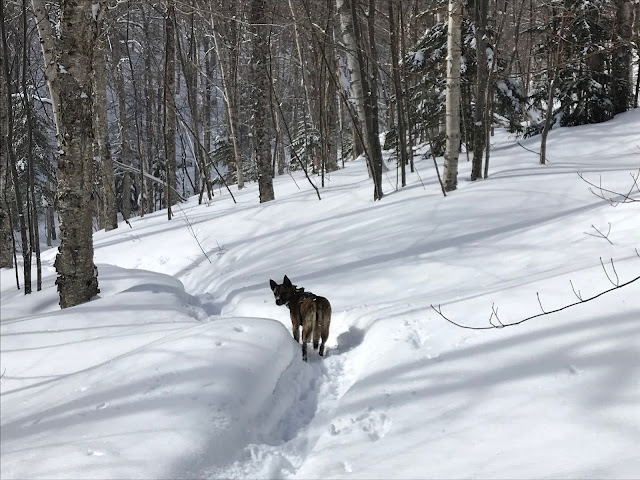 Henna, during her planned off-leash period, followed by her unplanned romp up the trail. Fortunately the deep snow kept her contained and she ran back to us after a bit.

We climbed up to the Kilkenny Ridge via the Bunnell Notch Trail, which ascends through a sapling forest (an old clearcut), then a beautiful yellow birch-paper birch forest, and then into a spruce forest. We were in and out of the clouds, with a light snow falling, so couldn't see any distance views. The beauty of the woods was a good enough view. A grouse flushed from its snow fort beneath a small spruce tree. Higher up, where the spruce dominated, we noted marten tracks criss-crossing the trail. Otherwise the woods were quiet, except for our beating hearts as we climbed. 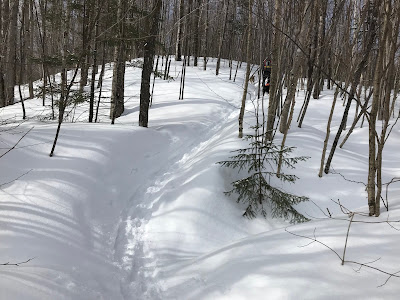 The Bunnell Notch Trail as it begins to ascend through an old clearcut.
Apparently, beneath the deep snow there are stone steps. 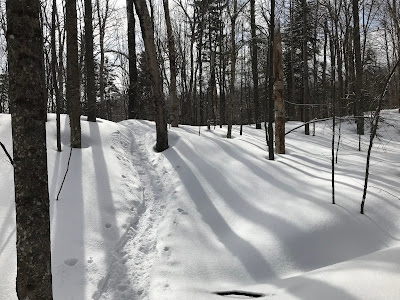 The lower section of the Bunnell Notch Trail ascends moderately
through a beautiful hardwood forest. 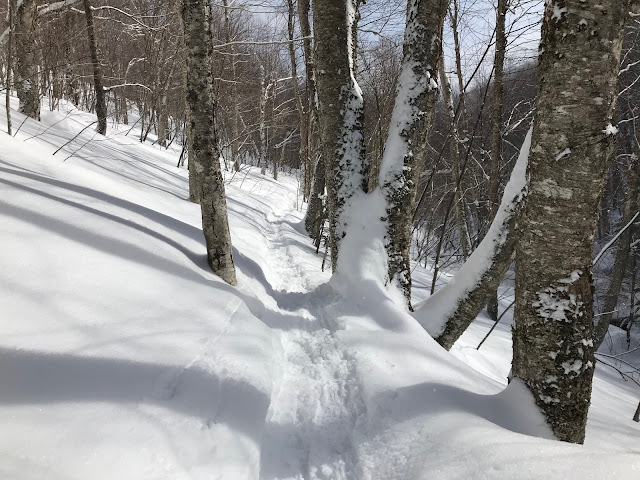 The trail begins to climb more steeply as it ascends along the north bank of Bunnell Brook
and past large, old yellow birch trees. 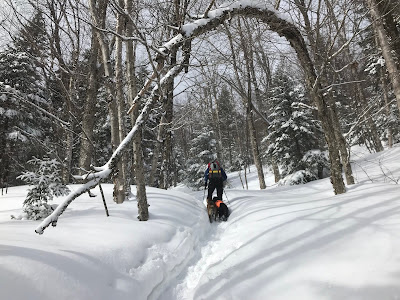 At this point along the trail the hardwoods give way to red spruce. 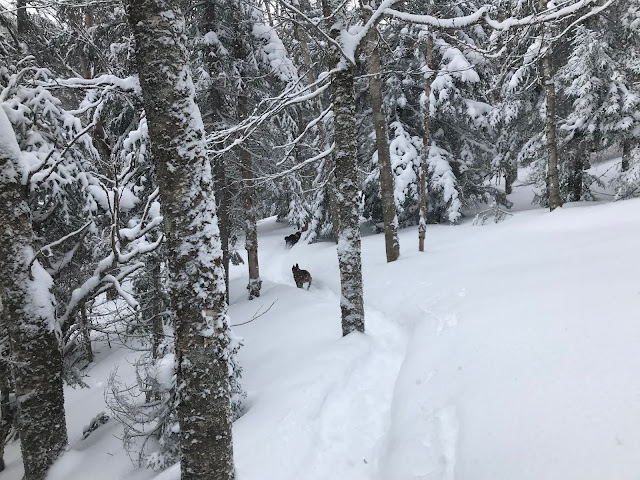 Henna chases Kodi up the trail. 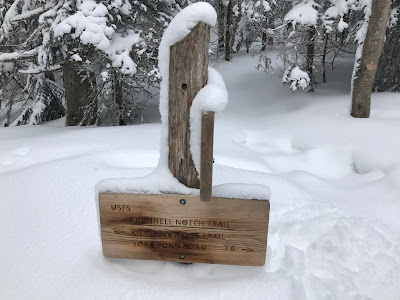 At the junction with the Kilkenny Ridge Trail we stop for a snack break.
The trail signs are just barely above the snow. 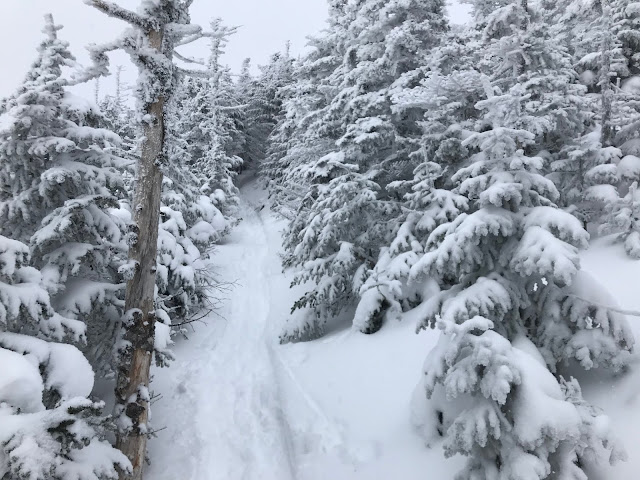 The snow-laden spruce trees made for a winter wonderland. Kilkenny Ridge was in the clouds and cloaked in snow. 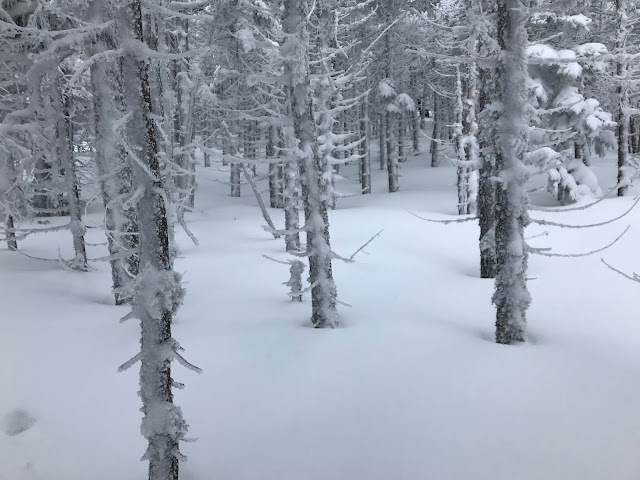 The last stretch of the combined Kilkenny Ridge-Cabot Trails follow a series of steep switchbacks, which allowed me to take periodic rests and absorb the beauty of the woods. 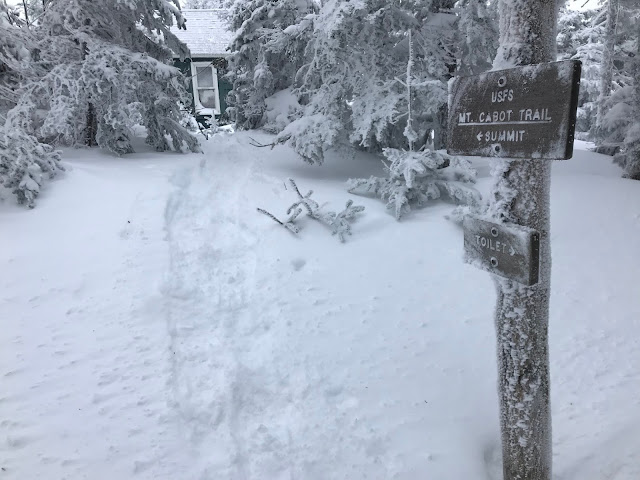 It was good to finally see the Cabot Cabin, where we paused for hot soup. Our fellow traveler reached sooner and was not able to find the trail to the summit. He turned back as did we, happy to have gotten to the cabin at 4,070 feet. Two young women were nearing the cabin as we descended, so the trail was well-packed for Saturday hikers. 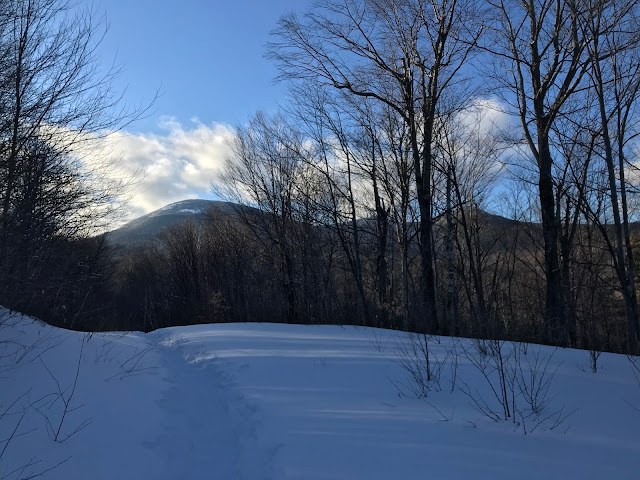 By the time we descended and looked back, the ridge was finally in the clear.
at February 23, 2019 1 comment:

I've not posted here for over a year. Too many distractions: Twitter, work, politics, family, dogs. I miss blogging. It helped me be a write better, I think. I found other gifted writers and artists and interesting people through my blog. It slowed down my mind and helped me remember important events in my life.

Here is something I wrote on October 13, 2017, but never posted here or elsewhere. Maybe this is why I stopped blogging, but perhaps why I should have kept going...so here's a start.


The bones of the 1760s saltbox are strong. When my parents bought the place in 1957, it was an old, rundown farm, yet they must have seen that strength in the house and outbuildings -- likely my father more so. He enjoyed fixing anything and was raised on hardscrabble land in western Manitoba and in Illinois farm country. That was in his bones. My mother was not used to the country life and was caring for two young children. Surely she was glad just to have beds and a good roof. My brother and I came along a few years later, myself the last of four.

The house remained much as it was for 12 years. Previous owners had removed the classic central chimney and fireplaces, installing a huge coal-burning furnace in its place. Our bedrooms were all on the second floor, which had no heat. I don’t recall being cold though, even when the pipes froze in the kitchen. That was life as a kid in our old house; we spent most of our time outdoors anyway. In winter it was cold, outside and in.

We roamed about outside, often without supervision, and usually barefoot in summer. There was no end to places to explore and play on our land and beyond: hay bale forts in the barn, hide and seek in a neighbor’s cornfield, treks up Long Mountain pulling our sleds, down in back along a farm road to catch pumpkinseeds and frogs in a small pond. Sometimes we ventured farther, to the mysterious, big swamp. We never got lost and when we arrived back home, Mom always had a meal ready.

This was the 60s. It would be decades before I realized how much my parents juggled back then, while nurturing us through our own adventures. They tended a drafty, old saltbox, myriad barnyard animals, dogs and cats, projects for county fairs, Dad’s teaching and research at the University, and four kids. Meanwhile, the Vietnam War and political assassinations weighed heavily on their hearts. My mother lost her father -- a World War I veteran -- then too, from what we now call PTSD. By sending us outside for hours on end, our parents made space for themselves too.

When I was nine, our house was jacked up on large blocks to pour a cement foundation and basement, replacing the small, cramped, dirt floor root cellar. Once lowered back down, masons rebuilt a massive central brick chimney and four fireplaces. In researching old houses, our parents took us to antique flea markets and scoured the countryside for used vintage bricks, which we loaded one by one into our truck. Back home, after school, we sat outside on short stools with a bucket of water and a hard bristle brush, scrapping off the mortar so the bricks could be re-used in the new chimney. I grumbled doing the brick chore and was utterly bored at flea markets; I was young then and not much into the restoration concept.

My favorite place was our backyard. There were two wild crab apple trees in the corner of the yard. Each spring they were full of white blossoms, just as dozens of warblers and other songbirds were migrating through. My father, a zoologist, taught us the birds by sight and sound. We listened, too, for the field sparrow and whip-poor-will singing from a neighbor’s overgrown pasture. In the evening we heard katydids and ran around with jars capturing fireflies. The croquet course was in a slightly rough patch of lawn. Dad taught us the game. Winning at croquet in our backyard required some skill, but also a bit of luck given the uneven ground that sent many well-aimed balls off into the weeds. On that croquet course we learned patience, teamwork, importance of a solid follow-through with the mallet, and to congratulate, albeit grudgingly, the winning pair.

My brother cut down one of the wild crab apples in September. It was dead and we needed to make room for a new septic system. The shallow well in the shed that has nourished our family for sixty years, including our parents into their mid-90s, will likely be supplanted by town water soon. The central chimney has a small crack. The house is for sale now. Our parents have passed and the four of us siblings have long since moved to other locations and lives.

Still, it is not easy to let go of this place. The family has gathered here for weddings, anniversaries, and birthdays, through generations. When Dad was in his 80s he worked alongside a skilled carpenter to restore the outbuildings: the shed, shop, garage, and barn. When they were 90, together Mom and Dad made sweet pickles from their own garden cucumbers. I still have three jars in my pantry. Mom continued to make apple pies and granola and pizza in the long kitchen with a view to the backyard, until her eyesight became impaired.

The backdoor of the saltbox leads to many memories. As I sit on the large rock step just outside the door, I can picture Dad puttering on his tractor and Mom on hands and knees tending her flower garden. The wild apple trees are now gone, the barnyard fence has rotted, the orchard is not as well tended, and the vegetable gardens are idle, but the saltbox remains strong. Our parents nurtured it into its third century and now it is ready for a new family’s adventures. 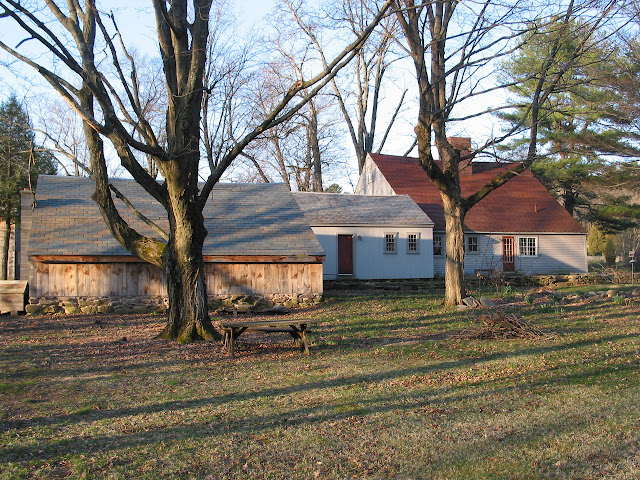