I started Spicebush Log on February 8, 2009, inspired by Tom Ryan's blog, The Adventures of Tom & Atticus. My mother was one of my biggest fans and my most regular reader. In recent years, macular degeneration had robbed her of the ability to read well, but just recently she asked about Tom and Atticus, wondering how they were doing. As it happened Tom lost Atticus this year and I lost my mother.

I haven't blogged much this past year, instead I was caring for my parents as they lived their final months in their home of nearly 60 years. And then after my Dad passed in November, my mother came to live with us until her death in June. Although I miss her (and Dad), they lived full lives into their 90s. And this recent post by Tom, captures some of my thoughts too:


"When I think of my late friend, sometimes I sigh. But mostly I smile and wonder where the years went. When people tell me absolutes about where Atticus is or what he’s thinking or if he appeared in the form of a rainbow or a butterfly or a cardinal, I pretty much ignore them. All I need to know is that he’s alive within me. That is nourishment enough." 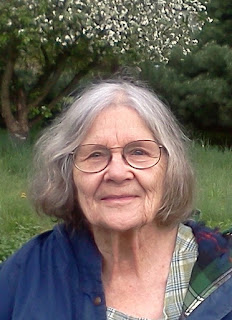 My mother was born in Wilkinsburg, Pennsylvania on August 31, 1921, the daughter of Agnes Stark Sumner and Sherman Sumner. She was born at home and the doctor who delivered her told her mother Agnes that he didn’t expect her to live long and certainly not to age 94!

She loved gardening, reading, music, ice cream and chocolate, puffy clouds and sunny days. For nearly 60 years she cared for the 1760s-era old saltbox house that Dad restored and where she raised four of us and welcomed in many neighborhood kids. Even into their 90s, they visited the local dance halls enjoying swing, country and especially contra dancing. Their 60-acre Amherst farm was among the first to be part of the Massachusetts Agricultural Preservation Program. They leased their farmland to a local CSA, Brookfield Farm, and were dear friends and mentors to Brookfield’s farmers and apprentices.

My mother, I think, would want me to be blogging again. Although I am not sure how many people read blogs anymore, I never did it for readership, but rather to journal about experiences, places, people, nature, and other musings. The blog connections that I have made over the years are precious and I still check in with those writers now and then--they've been more persistent in their writings. So, I begin again, my blogging career (!), for you Mom.
at July 30, 2016 6 comments: