The Full Flavor of Summer

We relished the first fresh tomatoes from New Roots Farm last week. The tomatoes are juicy, colorful, and full of flavor, features that are absent from any store bought tomato. 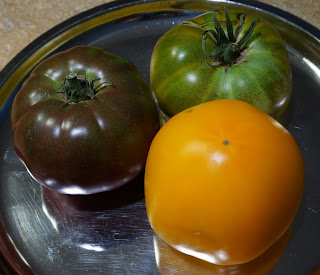 Farmer Renee at New Roots grows all of her tomatoes in high tunnels or greenhouses now, given the risk of blight and other rain and wind borne pests that now plague field grown tomatoes in our region. 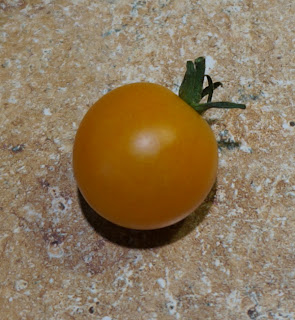 The tomatoes in my own garden are lackluster. The plants are tall and spindly. Chipmunks take a bite of any tomato that turns red and knock green ones off the plants. The San Marzano plants are loaded with fruit, but are suffering from blossom end rot. For next year I might build a small hoop house for my tomatoes as it pains me to see my tomatoes feed the local chipmunk population or succumb to disease.

On the bright side, blueberries are in season and the flavor is sweet. I picked 8 pounds yesterday at Inkwell Farm, a local organic blueberry farm in Epping, New Hampshire. 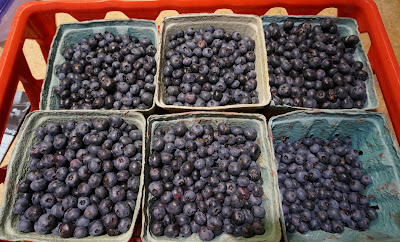 The bushes were not loaded with berries, but the fruit that I picked was plump and sweet and seemed pest free. I saw no evidence of the spotted wing drosophila, a tiny fruit fly that has invaded from China. For the past few years it has ravaged many a blueberry crop.

Blueberry picking is rewarding, especially when you find a bush full of ripe berries that was missed by other pickers. At Inkwell Farm I head for the bushes in the back, near the prickly spruce trees, where it is difficult to walk around the bushes. That is where I fill my quart boxes. While picking, I usually listen to the catbirds that find a home among the tall blueberry bushes or the resident guinea hens. Other pickers usually come in pairs or as a family and carry on conversations about work, family, baking, or local news. Occasionally I glean something useful from these overheard chats, such as how to make a better pie. Mostly I get lost in the search for the best blueberry bush and just enjoy the picking (and tasting).

Our growing season is all too short here, so best to get outside and enjoy the full flavor of a New England summer.
at July 31, 2013 No comments:

We got a good rain today. We needed it after a week of beastly hot weather. This despite all the rain -- too much rain -- that we got in June and July. During a lull in the rain this afternoon I took some photos of our gardens as it all looked so lush and nice. 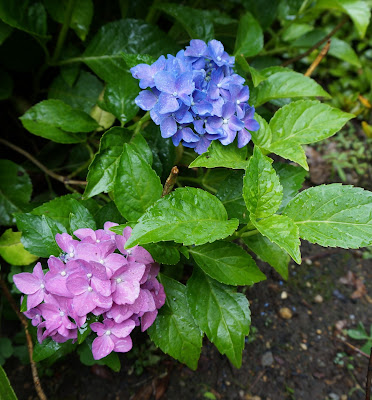 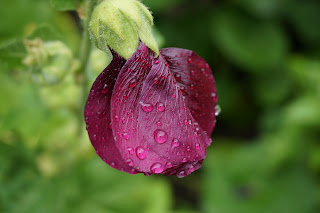 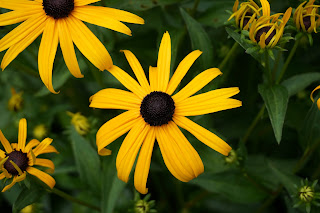 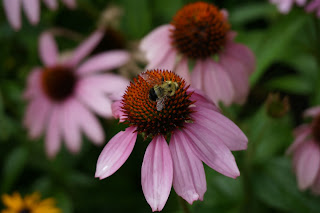 A red bee balm among the daisies 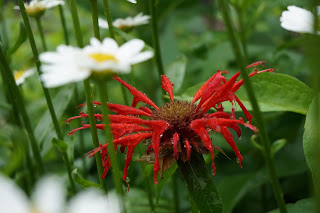 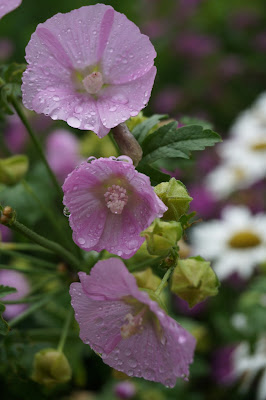 An adult spring peeper - my second peeper sighting in our yard in less than a week -- was perched on a goldenrod stalk. I barely noticed the tiny frog as I walked by, so well-camoflaged it was, looking like a bit of dead leaf. 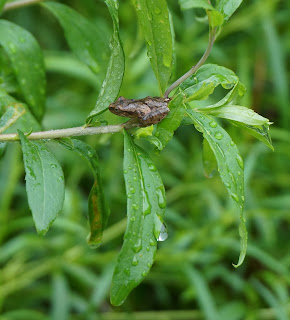 Two peepers in the yard. The little one on the left was about 1/2 inch in length- likely a young of the year. It hunkered down, perhaps thinking it blended into the raspberry leaf. The peeper on the right I saw today. It was nearly an inch in length, darker in color, and more alert to my presence. It is so unusual to actually see these tiny frogs, that seeing two in one week in my backyard was a treat. 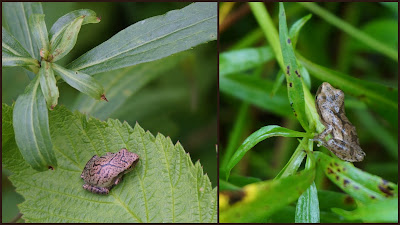 Henna, the Heat, and Harvesting Garlic

Two items dominated our thoughts at home last week. Henna returned home from the Vet on Wednesday after a 28.5 hour stay. She was having problems keeping food down and her stools were soft. We suspected either Giardia or a blockage in her stomach, or both. An x-ray showed gas bubbles in her stomach. Our Vet suggested an IV to pump fluids into her system to push through anything that might be stuck in her digestive tract.

The sleepover at the Vet's seem to do Henna well, although whether she swallowed something that got stuck or whether she just had a bad stomach flu caused in part by Giardia (which she tested positive for), we still don't know. The tab for two x-rays, IV fluids, lab test, Vet evaluation, two medications, two cans of dog food, and 24-hour care was $350. If that was a human medical visit it would have been in the thousands of dollars. Dr. Williams and his staff at Arbor Veterinary Services in Lee, New Hampshire are caring, thoughtful, and quite reasonable in cost.


Henna (on right) at The Yellow Dog's Barn dog daycare in Barrington, NH
-- she'll return there this week after recovering from Giardia 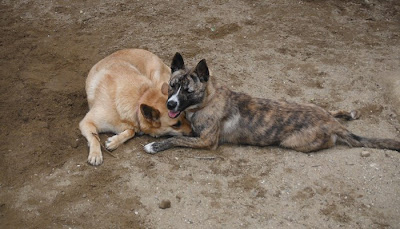 The other news of last week was the beastly heat. It peaked on Friday, reaching 100 degrees. Some time during Saturday night the weather finally broke as a cooler breeze wafted into the bedroom. After too much rain during June, now it seems too dry. A good rain would be helpful. It's been a tough growing season for some crops, especially tomatoes and summer squash and zucchini, at least in our garden.

On Saturday, my sister, mother, and I harvested our garlic, which we plant at my parent's Winterberry Farm in western Massachusetts. We pulled more than 400 bulbs, most were of medium size, some were small, and a good number were large. The latter will be saved for the fall planting. 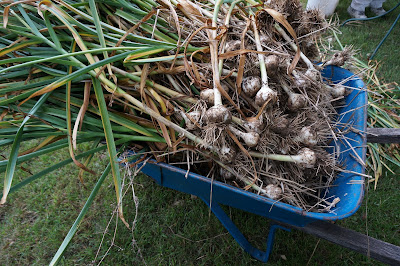 My mother helps prepare the garlic for drying. 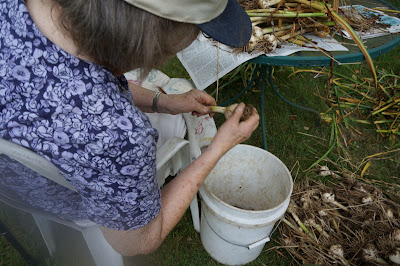 I brought home and cleaned a handful of bulbs. Good to have fresh garlic again and to throw away the dried up bulbs from last year that we'd been nursing along until the new crop arrived. 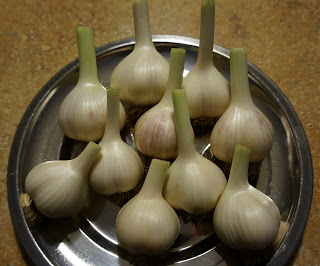 Kodi and I just returned from a trip to the Vet's with Henna. Four the past 4 to 5 days she's been regularly eating grass then vomiting and for the past 24 hours could not keep any food down. An x-ray showed some soft material in her stomach -- maybe vegetation, paper or plastic, or cloth, or stuffing from the pillow that she shredded a few days back. Our Vet is holding her for the day, to give her IV fluids in hopes that will help pass the material. An x-ray later today will confirm whether that strategy worked or not.

So, back at home I opted for a yard walkabout to collect Japanese beetles, before settling back into my work. This chore was sidetracked by my discovery of a young spring peeper, barely one-half inch in size, sitting on a raspberry leaf. I ditched the beetle jar and went for the camera. My spirits were brightened by the sighting of this little frog with the x pattern on its back and diminutive size. Now I am more energized to get back to work until I hear the update on Henna later today. 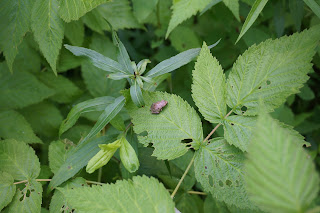 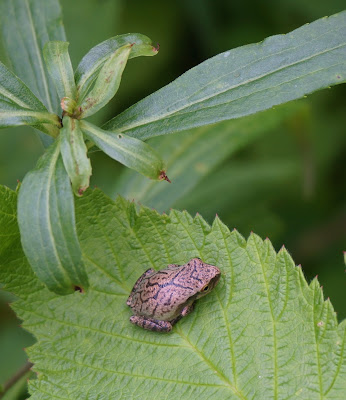 This year I planted two potato crops. One I planted in my home garden -- that was the source of our first new potatoes harvested on the 4th of July. I mentioned in an earlier post that I have few pests bothering the plants, including no Colorado potato beetles. The plants are healthy.

My second crop, planted at New Roots Farm where I volunteer, is a different story. There I planted three rows, each nearly 100 feet long. New Roots is an organic farm, so I've used mainly cultural controls: the potatoes were planted in a different field from years past and I check the plants once a week for beetles. Yesterday I walked the rows plucking off (well, squishing) hundreds of Colorado potato beetle larvae and adults. It was not a pleasant task. The larvae are really disgusting.


An adult Colorado potato beetle, roundish like a potato and striped 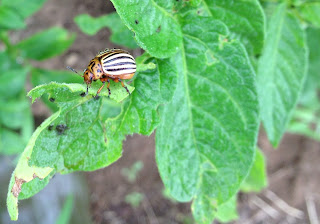 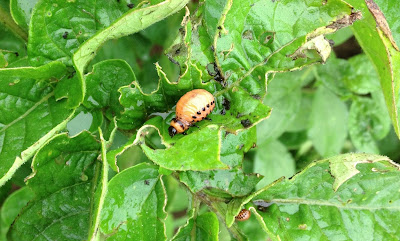 The Colorado potato beetle is voracious and difficult to control. Crop rotation may work if you can plant your crops 1/2 mile apart. Obviously, not realistic. Planting every other year helps a little, but not much. Hand picking the beetles and larvae works for small gardens. Pesticides (organic or otherwise) are not that effective either. Covering the plants with row cover after planting might work, but what if a few beetles get under the row cover. Another option is to grow early maturing potatoes (the plants mature before the larvae are most active), but those are not good as keepers.

I am fortunate thus far not to have the beetles in my home garden. This is only the second time that I've grown potatoes here so likely the beetles have just not found my spud plants yet. New Roots has grown potatoes for many years and the beetles are well-established there. Colorado potato beetles have now surpassed Japanese beetles as my least favorite pest. At least with Japanese beetles I only have to deal with the adults (I leave the underground larvae to the moles).

Given my experience growing a large crop of potatoes, I have no idea how potatoes are grown in this country. Likely commercial growers are using a ton of pesticides. I'll need to learn more from organic growers, even they need to use some organic sprays. Maybe I will just east fewer potatoes.
at July 11, 2013 No comments:

Signs of a Green Thumb

We dug our first potatoes of the summer on the 4th of July. The plants have done well with the excessive rain and fluctuations in temperatures this growing season. I expected a lot of potato and cucumber beetle foraging on the leaves when I returned home after more than two weeks away. But the plants looked great and I had not a single pest to dispatch. 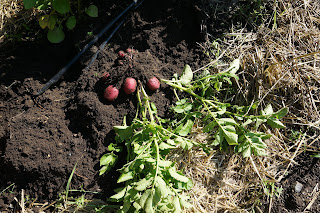 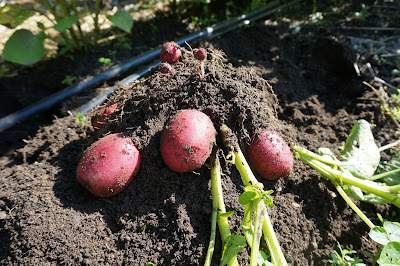 The rest of the garden and the flowers are also doing surprisingly well. Most of our cultivated gardens are in the front yard, which tends to be sandier and better drained than the backyard. That has served us well in this wet year.


The red cabbage, broccoli, and eggplant plants look so good that it
almost seems like I have a green thumb, which is not always so evident. 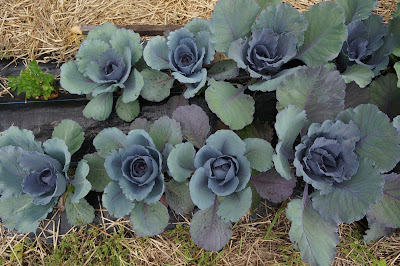 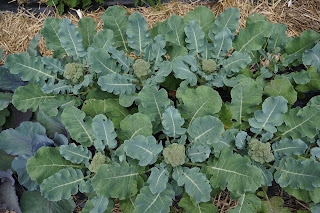 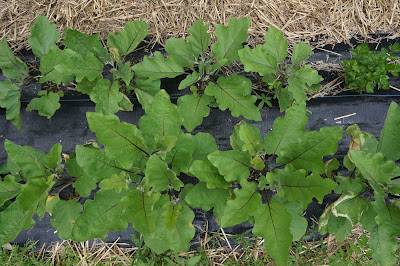 The fence around the vegetable garden seems to be keeping the deer out,
even though we regularly see one bounding through the yard.

I reserved the three raised beds in the backyard, near the woods, for squashes, cucumbers, and cantaloupes--plants that are more prickly and hence less desirable to deer, and where a fence is typically not needed. So far, so good. I see tiny fruits on all the plants. 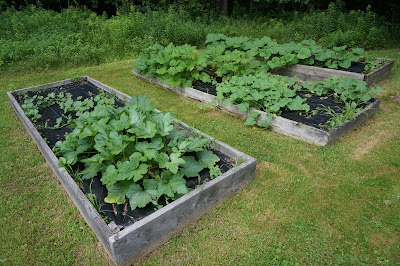 The vegetables are good to eat, but it is the flowers that catch my eye. Typically the flower gardens look best in June. This year July is taking top honors so far. The hollyhocks that I planted last year at the base of the deck are in full color right now. 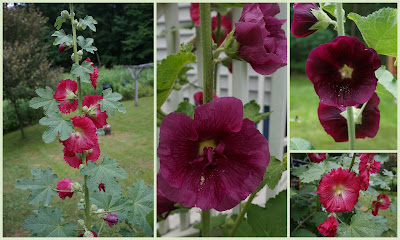 The combo of red bee balm and white daisies draws in the ruby-throated
hummingbird and many insects and catches my eye. 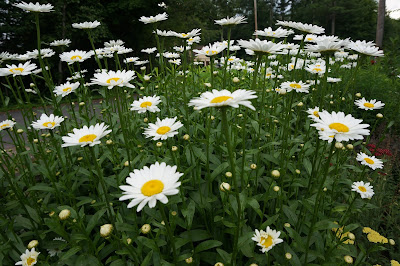 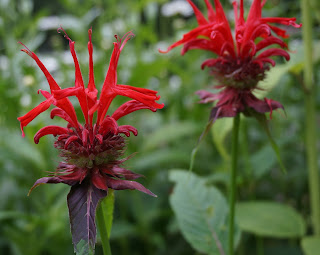 Tending to these gardens takes time and requires getting soil under the fingernails, but none of it is hard. Weeding and pest monitoring (and removal of Japanese beetles) are the main chores. Despite the wacky weather -- too cold, too much rain, too hot -- our gardens are thriving this year. So, it just looks like I have a green thumb. Mostly it is due to Mother Nature and some luck.
at July 07, 2013 No comments: