Autumn in the Mountains

We slipped into fall over the weekend. It felt time, with cooler nighttime temperatures, heavy morning dew, frost in the north, and hillsides of color. We ventured north to Jackson to celebrate this seasonal shift. On Saturday morning low cloud cover obscured our view of the mountains. We were dubious whether the clouds would clear as we headed to Crawford Notch (where low clouds always seem to linger) to hike the Webster-Jackson loop. To our surprise and joy, the Notch was clear and colorful. 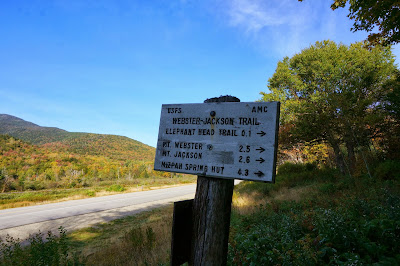 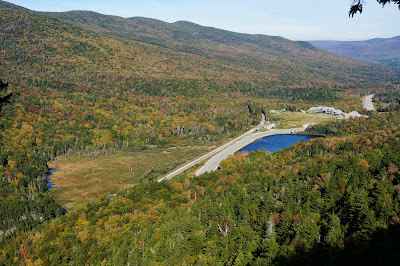 The 6.5-mile round trip hike to the top of Mt. Webster (3,910') and Mt. Jackson (4,052') via the Wesbter-Jackson Trail and the Webster Cliff Trail is rigorous. It passes through spruce-fir forest, climbs several steep rocky pitches, winds up and down to cross several small brooks--all of which had flowing water. 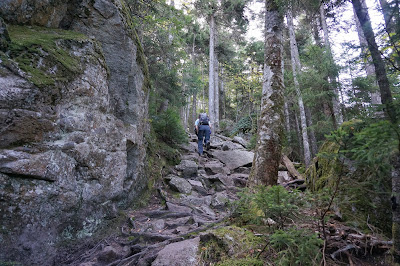 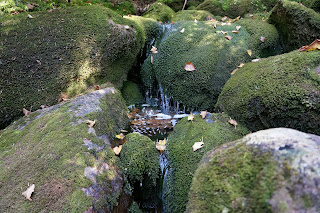 On nearly every hike in the White Mountains--up high or down low--we see a toad,
which always make me glad for some reason 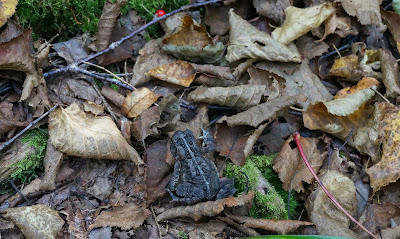 The summit of Mt. Webster is a ragged mound of bare rock that drops off precipitously to the west, into Crawford Notch. We perched here briefly to take in the view of Mt. Willey, Mt. Field, and Mt. Tom on the west side of the Notch. 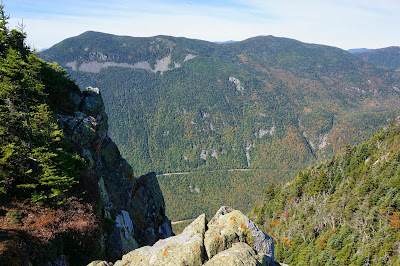 After taking in the sweeping view to the west from atop Mt. Webster, I turned northeast toward a clear view of Mt. Washington and its high presidential brethren. 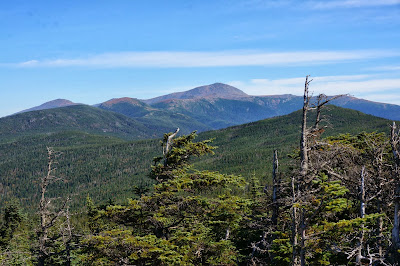 The trail between Mt. Webster and Mt. Jackson is relatively flat, except for the last bit. Bog bridges and boardwalk dot this stretch of trail that traverses wet, boggy areas. Two thru hikers--Beeline and his partner--passed us as they headed north. They moved quickly, in part because they were well-conditioned, but also because winter is closing in on the final leg of the Appalachian Trail. They needed to move quickly. We wished them well. 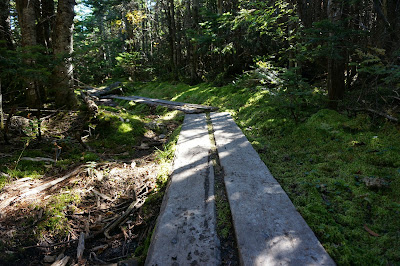 A look back at Mt. Webster as we began the final climb up to Mt. Jackson 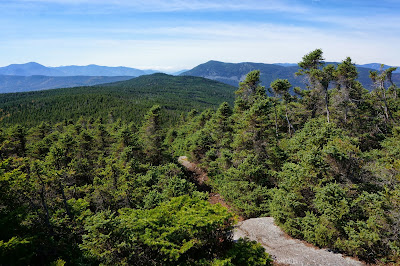 The summit of Mt. Jackson was a popular destination on Saturday. Many hikers on top and we passed a lot of hikers on their way up as we descended. The youngest hiker we met was six years old. Mt. Jackson offers great views, especially on the cusp of fall.


Henna, Kodi, and I atop Mt. Jackson with Mt. Washington in the distance 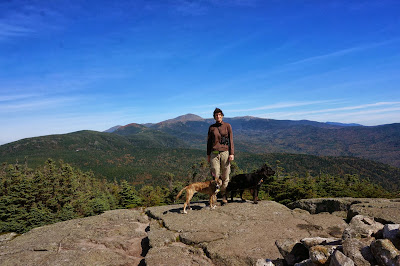 A close-up of Presidential Range: the gray speck on the left,
on the south shoulder of Mt. Pierce, is Mizpah Hut.
Mts Eisenhower and Monroe rise beyond Mt. Pierce
and lead up to Mt. Washington 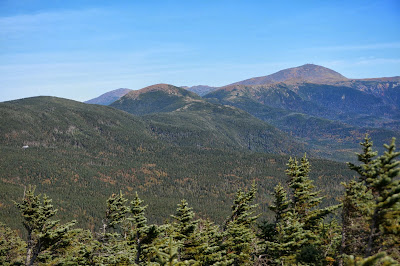 And then another look west across to the Willey Range 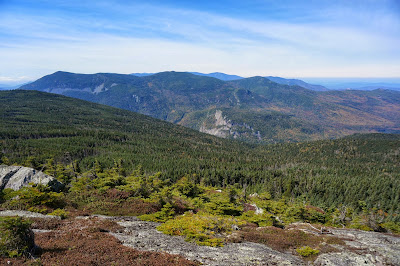 Mt. Jackson has a much broader summit than Mt. Webster, with many nooks and crannies and view points. In this next photo I captured the wind-swept fir trees ("flags") on the windy summit. 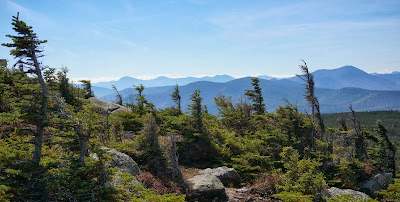 Henna, our youngest dog, is still not off-leash, so she set a quick pace, straining against her flexible lead. By the time we arrived back at the car we were ready to rest our feet and our knees. With a final look at "Elephant Head," a rock formation that looks down on Route 302, we headed south, leaving the Notch behind, but taking a bit of fall with us. 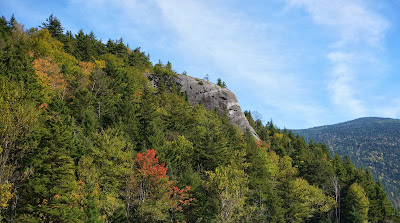 In 1984, I moved from the forested landscape of New England to the relatively treeless region of central Iowa. It took me some time--including two years of my Master's research studying small mammals in native prairie--to appreciate the beauty of this low, rolling terrain dominated by corn and soybeans and remnant patches of prairie. When I left the midwest and returned to the northeast nearly ten years later, it was with a deep appreciation of the subtlety and complexity of the tallgrass prairie and with sadness of how much prairie was plowed under and paved over.

My fondness for the prairie developed through my own work and from the wisdom of a prairie ecologist who I worked with in Minnesota. Kathy Bolin managed and restored prairie for the Minnesota State Parks. She managed crews removing invasive plants, setting prescribed fires, and protecting more patches of prairie before they were converted to houses. My favorite lesson from Kathy was one she took into elementary schools. She asked students which plant had deeper roots: the white pine twig in her left hand or the blade of big bluestem in her right hand. The students said, of course, the white pine (the tallest tree in the east). The big bluestem grows to nearly nine feet; tall for a prairie plant, but diminutive compared to a majestic white pine.


White pine can grow to heights of 150 feet or more 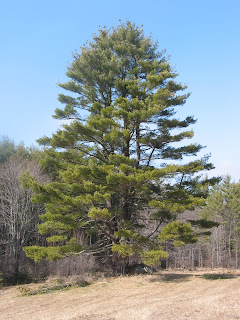 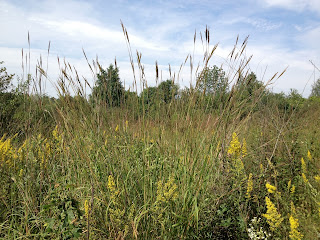 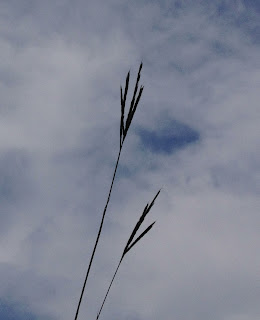 Maybe you've heard about deep prairie soils as well as about the rocky, shallow soils in which white pine often grows. That information alone gives up the answer to Kathy's question. A white pine, despite its girth and height, has a shallow, wide root system--a feature that causes many pines to be uprooted in major storms. Big bluestem extends its roots down twelve feet; this native grass is taller underground than aboveground. It is these grasses and other plants in a prairie community that has created the deep prairie soils on which we now grow mostly corn, soybeans, and houses.

On a trip to Ann Arbor, Michigan last week, I walked through a remnant prairie along the Huron River; the prairie was being restored by the City using prescribed fire and invasive plant control. Yes, the City of Ann Arbor has conserved thousands of acres of open space and engages staff and volunteers to restore and maintain native prairie. It was refreshing to see a community committed to caring for natural areas and a reminder of the beauty of native prairie as I walked among big bluestem towering over my head.
at September 17, 2013 2 comments:

Last Friday I brought home a small crate of seconds tomatoes from New Roots Farm. Today, after picking two bushels of sweet peppers for Farmer Renee to take to the Portsmouth Farmer's Market, I left with my own bushel of seconds: peppers with a black spot, or a small holed chewed by a vole, or some other imperfection. Since it is pepper time, I'm spending my late Friday afternoon washing, chopping, and freezing peppers.


Here are some pictures of the pepper haul that I brought home. 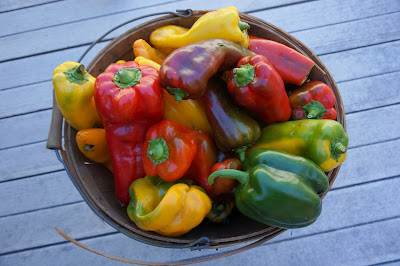 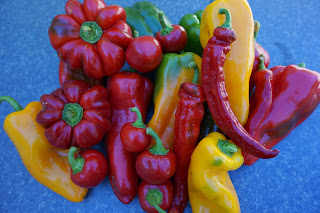 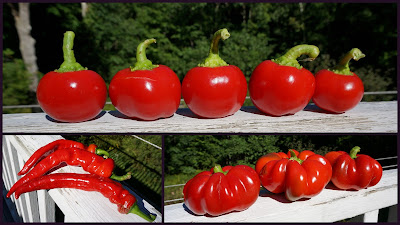 The cherry bombs--the row of round red peppers in the photo above--have a sweet flesh, but the seeds are dynamite. I know because Farmer Renee and I tasted one today. Renee tasted the flesh; it was sweet. She went a little further and bit into the seeds. Then she ran into the house in search of something to cool her mouth. I agreed that the flesh was sweet and I could smell the heat coming off the seeds; my lips burned a little. I avoided the seeds. Renee was in pain for about 30 minutes. Apparently cherry bombs are great for stuffing, just carefully remove all the seeds.

The Jimmy Nardellos (long and thin) and the Round of Hungarys (squat and ribbed) are both sweet. The other peppers in the basket above are all sweet: green bells, red carmens, and huge yellows. I have several uses for all these peppers: chopped fresh for salads, especially tabouli; chopped into strips and sautéed in vegetable oil with gram flour and salt or grilled with onions and summer squash; or chopped and frozen for winter use in chili and other dishes.