I had not thought much about the emerald ash borer--an invasive beetle from Asia--until I visited my brother west of Chicago a few years ago and saw all the dead ash removed from formerly tree-lined neighborhood streets. The emerald ash borer (or EAB) is a minor pest in its native place: a vast range that includes northeast China, Korea, Japan, Taiwan, Mongolia, and the Russian Far East. But after it was first discovered in Michigan in 2002, it has chewed its way across 22 states including most recently in New Hampshire, killing millions of ash (white, green, and brown).

This metallic green slender beetle is 1/2 inch long. The adults, which live only 3 weeks after emergence starting in late spring, chew ash leaves with little impact to the tree. The larvae are the killers. Female borers lay dozens of eggs, sometimes a hundred or more, in the tree bark. After hatching, the creamy white, legless larvae burrow into the inner bark and begin feeding on the tissue between the bark and sapwood, disrupting the flow of nutrients and water in the tree. They leave s-shaped feeding galleries filled with sawdust. 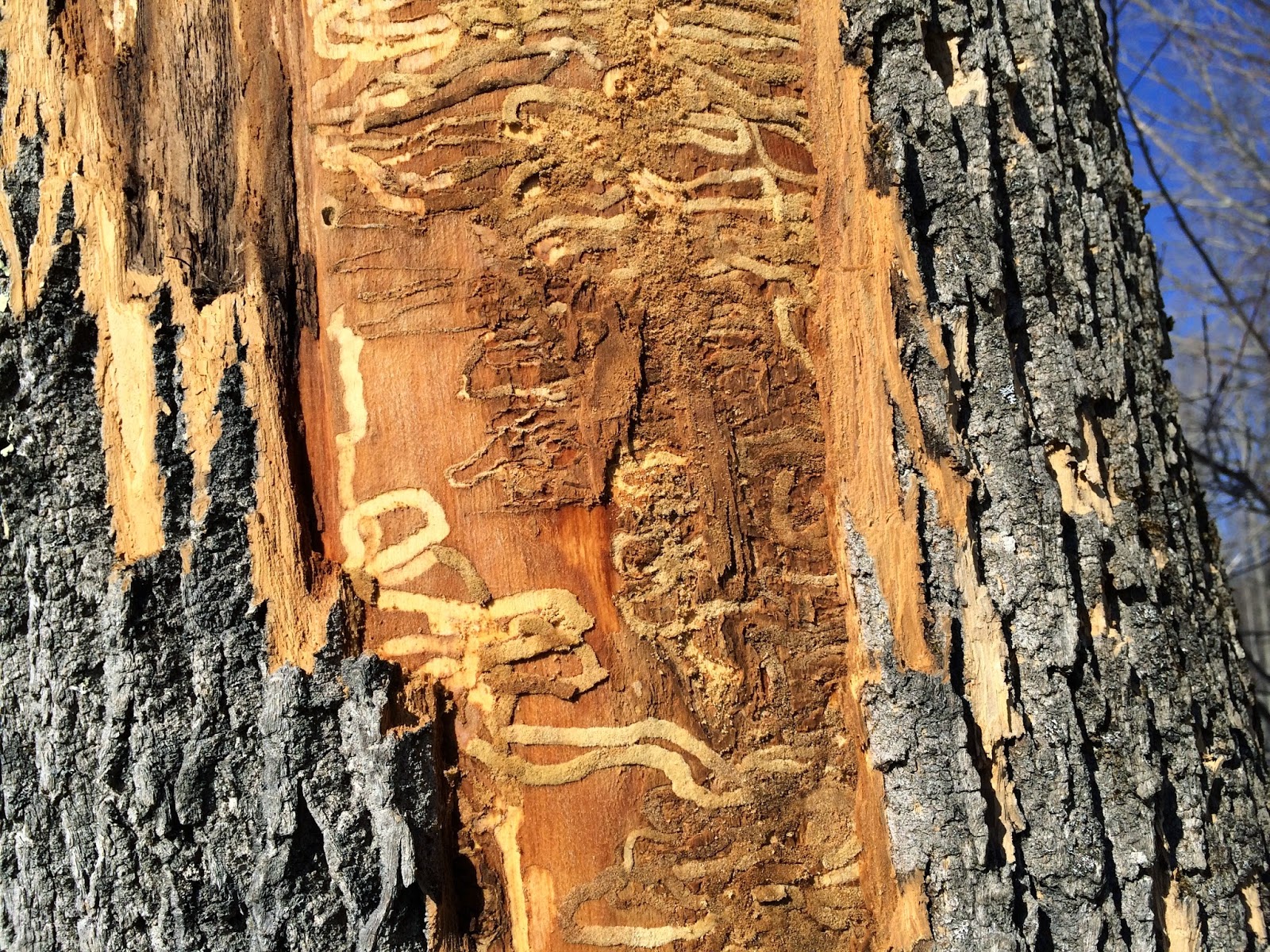 The emerald ash borer is now considered the most destructive forest pest in North America. Its relentless pursuit of healthy ash trees shows no sign of stopping. Once infested, ash trees die within 3 to 5 years.

EAB was first discovered in Concord, New Hampshire in March 2013 and subsequently in Bow, Canterbury, Loudon, Hopkinton, Salem, and Weare. As a result, three southern NH counties--Hillsborough, Merrimack, and Rockingham--are under quarantine, as is all of Massachusetts and Connecticut. The EAB quarantine prohibits the movement of any hardwood firewood, all ash wood products, and ash nursery stock out of the quarantine area unless certain conditions are met. The recommendation for firewood is to use it within 5 miles of its source. Lots more information on EAB is available at nhbugs.

There are native wood boring beetles, but they usually feed on already dead or dying trees, unlike EAB, which feeds on large, healthy ash. There are also some EAB look-alikes--check out these. Since emerald ash borers feed on healthy trees, it often is many years before their presence is detected. One of the first signs is the result of woodpeckers feeding on EAB resulting in "blonding" of the bark. 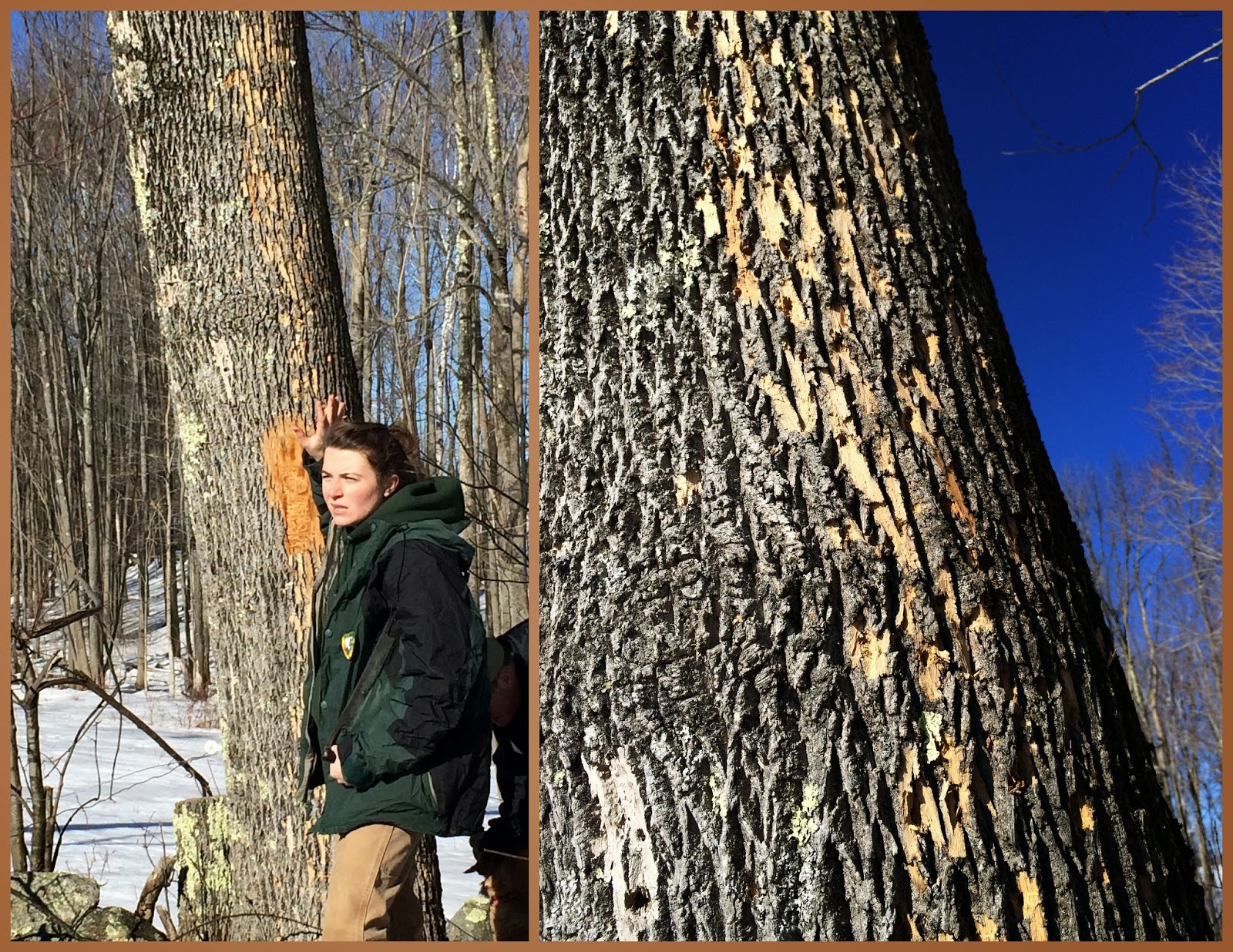 Everyone in New Hampshire can be keeping an eye out for emerald ash borer. The goal of reporting its presence and of the quarantines is to slow the advance of the beetle. Whether this is enough to stop the emerald ash borer from killing all the ash in North America is unknown.
at January 28, 2015 No comments:

The Cornell Lab of Ornithology (at www.allaboutbirds.org) hosts several cool bird cams including this one called FeederWatch as well as being a source for tons of information on birds.
at January 24, 2015 No comments:

The snow pie condition that I described last week is now covered by one to two inches of powdery snow that fell during the day on Friday. This, combined with a blue sky weekend (albeit still cold), significantly brightened my mood. If we are to have cold, windy winter days, it feels so much warmer when combined with fresh snow and sun.

The woods come alive after a fresh snow with stories of animal movements. The dogs and I visited a favorite nearby conservation area (Piscassic River Wildlife Management Area). 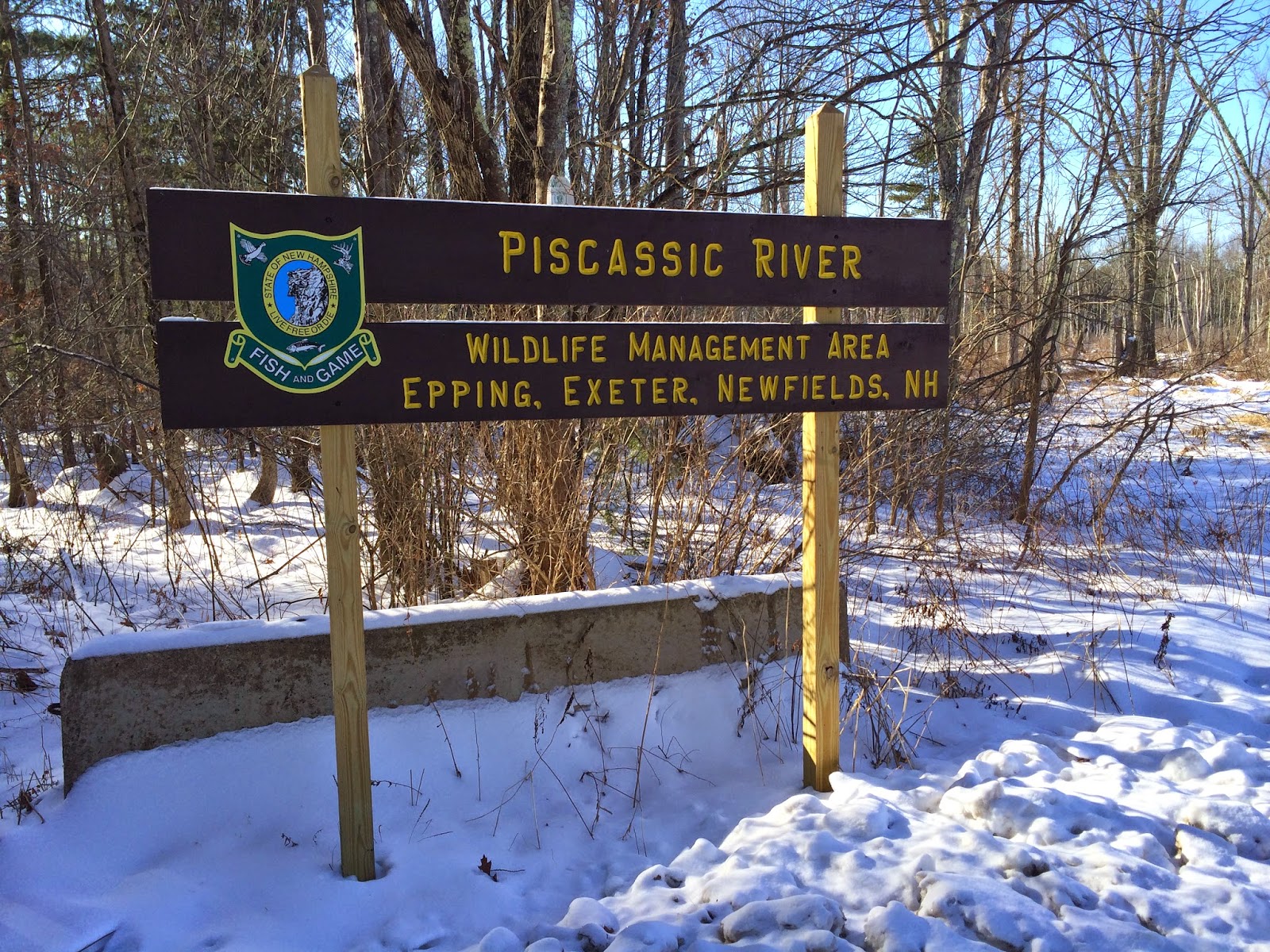 Saturday morning we ventured farther along a woods road that is gated and rarely traveled by other people. The forest is mostly hemlock mixed with red and white oak--a favorite area for deer in winter. A place where they can paw through the snow to get acorns and where snow depths are kept low by the hemlock cover. 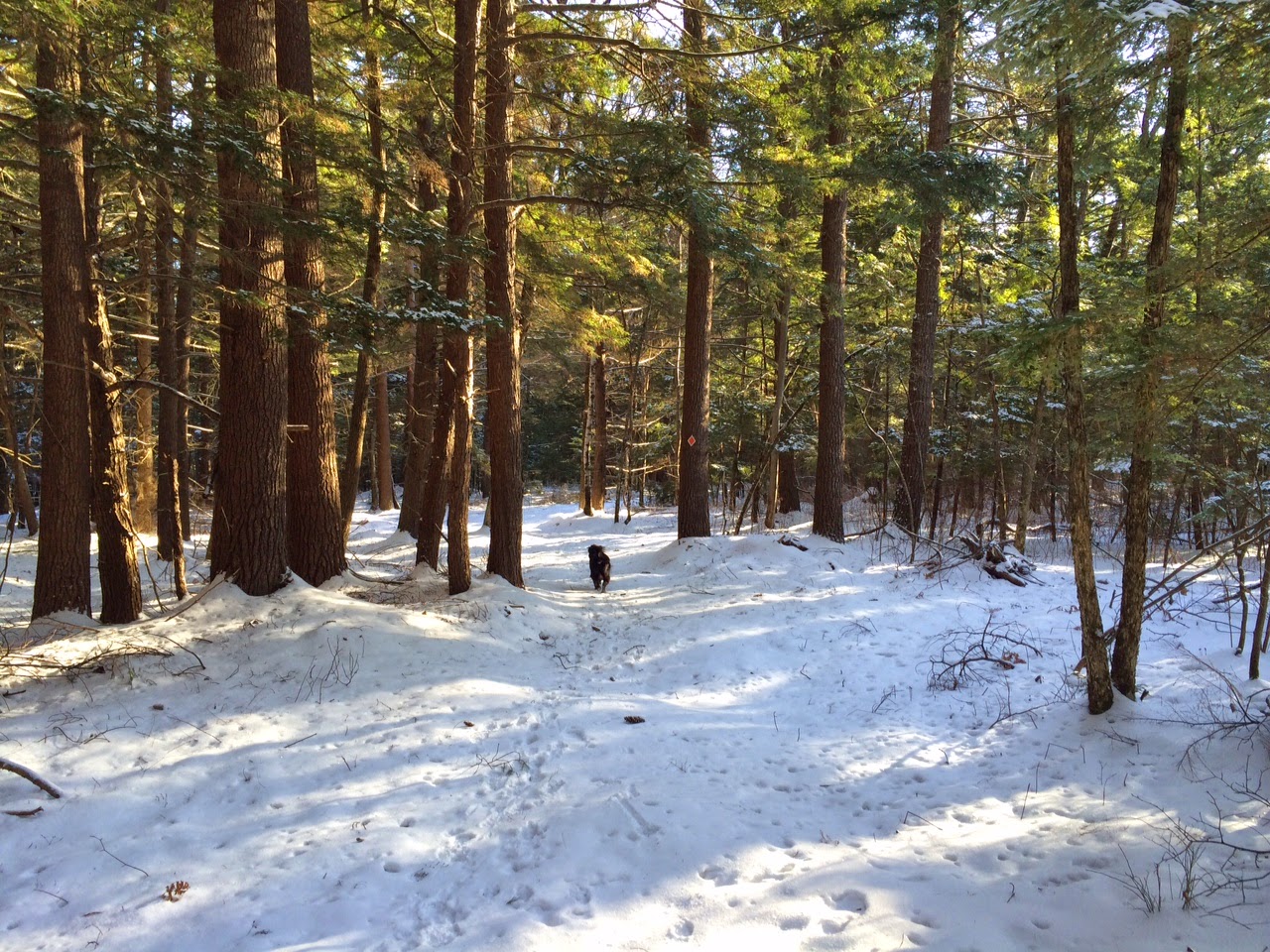 We saw lots of deer sign: many patches where snow and leaf litter were churned up, tracks criss-crossing our path, piles of pellets. And Henna's keen ears and eyes were on high alert. She gets excited in deer country, which is why she is always on leash. 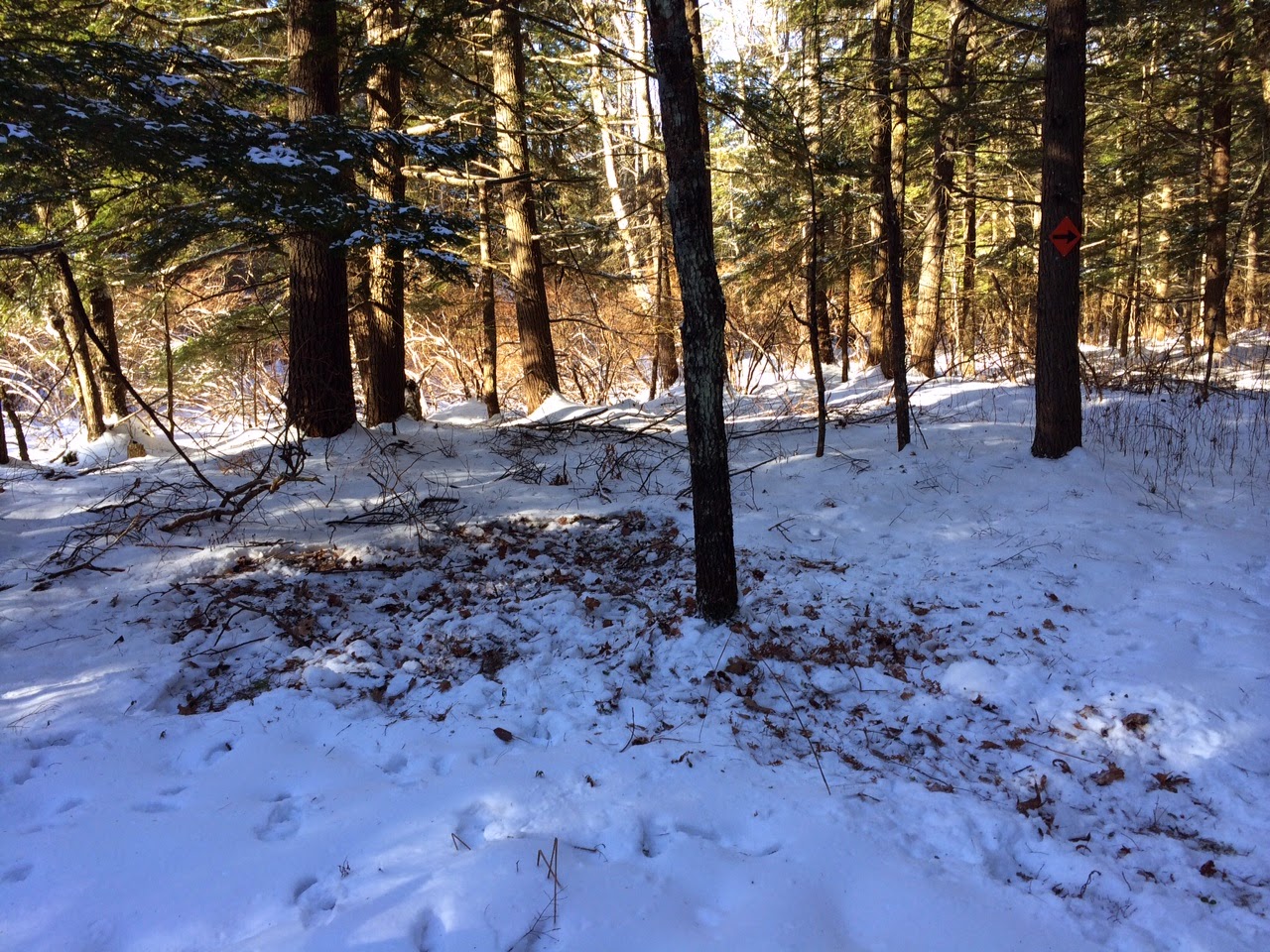 We see deer sign year round and on nearly every hike. It is the wanderings of small to midsize mammals that really emerge after a fresh snow fall. Some of my favorites... 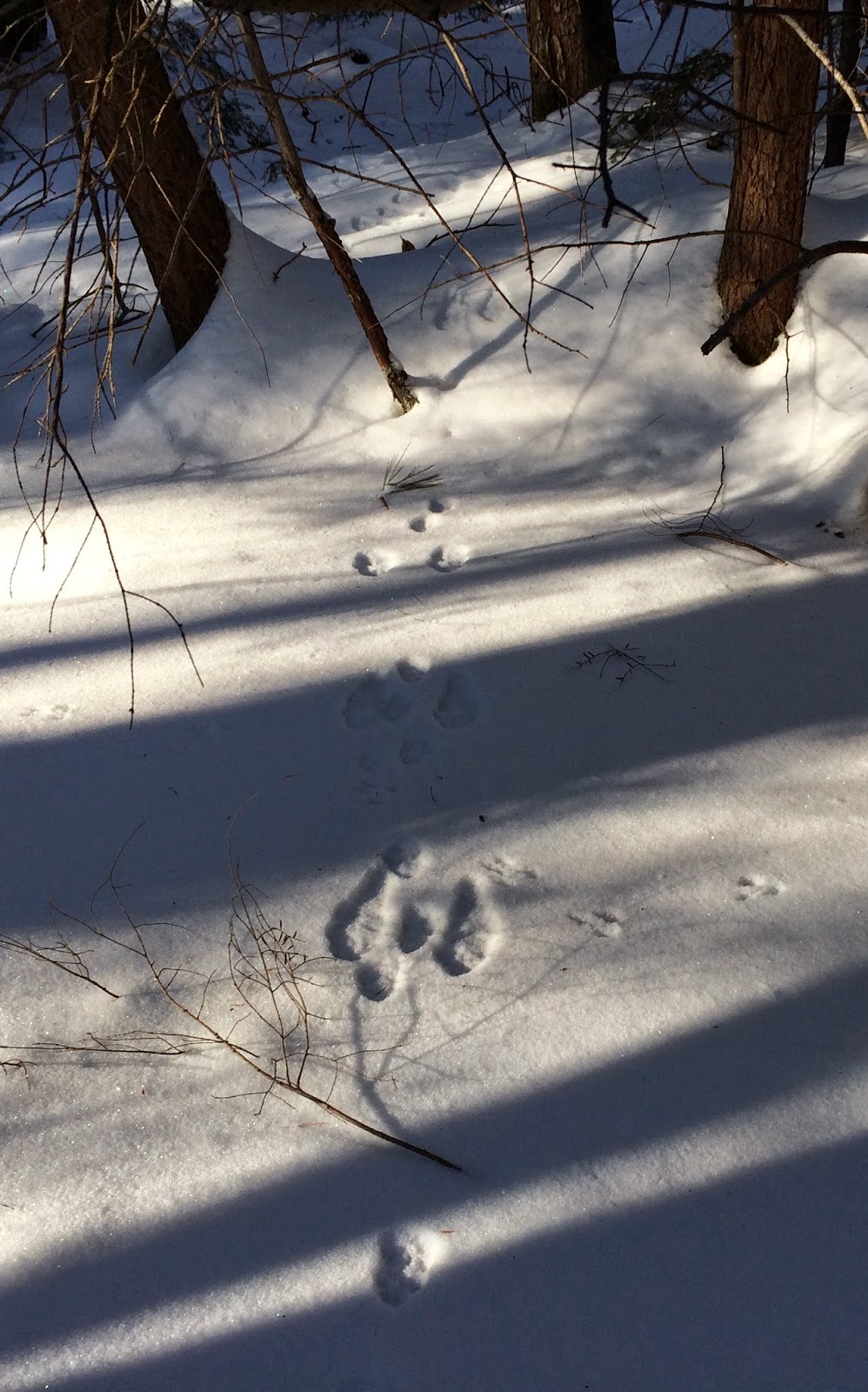 dainty tracks of woodland mice,
walking and then jumping,
maybe to escape the clutches of a coyote or an owl

All the more beautiful in the shadows cast by the low, winter sun.
at January 11, 2015 No comments:

It takes only a couple days straight of below freezing temperatures for me to stop complaining about a too-warm, tropical-like December. That sounds lovely now.

After a balmy start to the New Year, this week brings cold, cold, cold. It all started Saturday night with a storm that brought snow, sleet, freezing rain, rain, ice, slush, fog. The forecast for Sunday was to warm into the mid-40s by the afternoon. Maybe it would melt. I hedged my bets though and slogged in the morning to clear the driveway of wet, heavy snow. A good thing as the thermometer never got above 34 F. I note now, a few days later, that folks who did not clear the two inches of slush/ice/snow are stuck with an icy driveway for a week.

One benefit from the storm is that birds are flocking to the feeders in big numbers. With the lingering gray sky and muted sun, it is nice to see the bird life: 50+ mixed group of goldfinches and pine siskins, a foursome of bluebirds, juncos, hairy and downy woodpeckers, nuthatches, purple finch and house finch pairs side by side, mourning doves. But where are the chickadees? They seem strangely absent. And the chipmunks have certainly, finally, gone dormant until the next warm-up.

Storm precipitation and temperature fluctuations left behind a pie-like snow cover: an icy sheet on the bottom, a shallow filling of soft snow, and a crunchy topping. But much less satisfying than a tasty pie. Kodi, Henna, and I managed a decent walk in the woods this morning. There is just enough crunchy topping to get a grip and avoid skids and cuts. However, watch the sidewalks, some are still treacherous with a veneer of sheer ice.

The low point temperature-wise will be Wednesday night/Thursday morning: below zero prediction. And windy.
at January 06, 2015 No comments:

It's just a one-hour (at a brisk pace with two dogs) round trip hike that starts a short distance from my parents homestead, so I do it often. The trail ascends through beautiful oak-beech woodlands to a saddle between Long Mountain and Mt. Norwottuck, the highest mountain in the Holyoke Range. 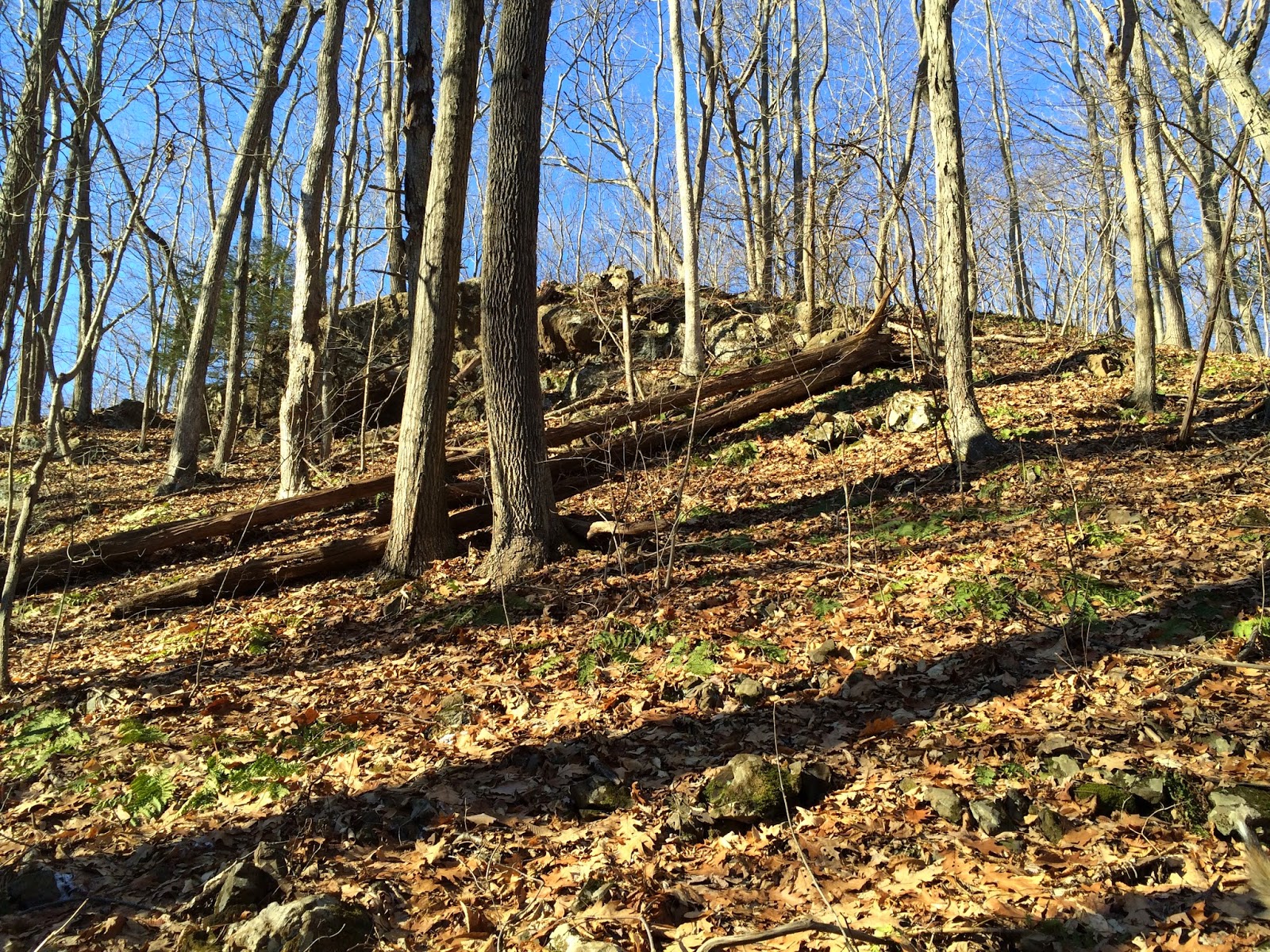 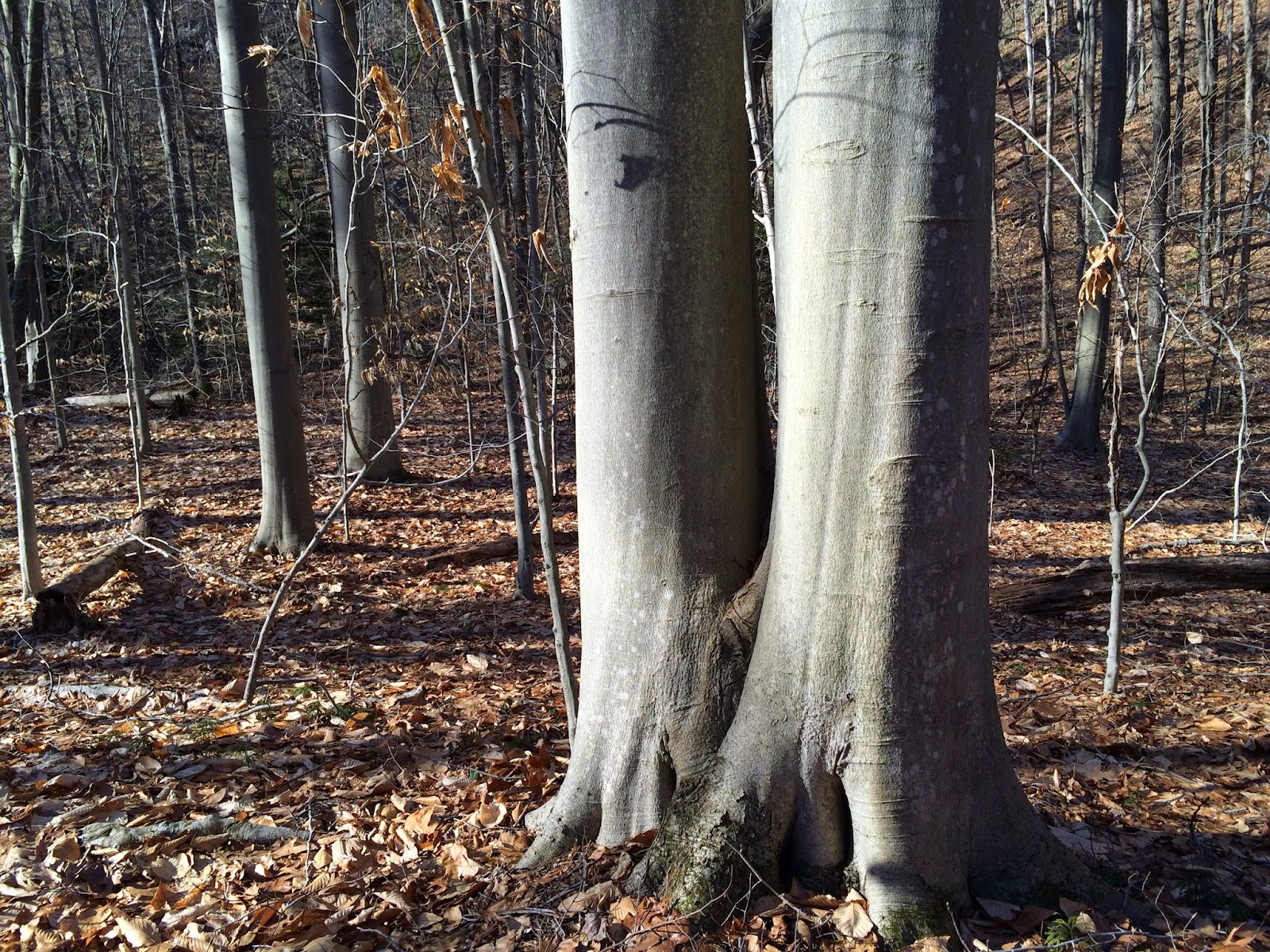 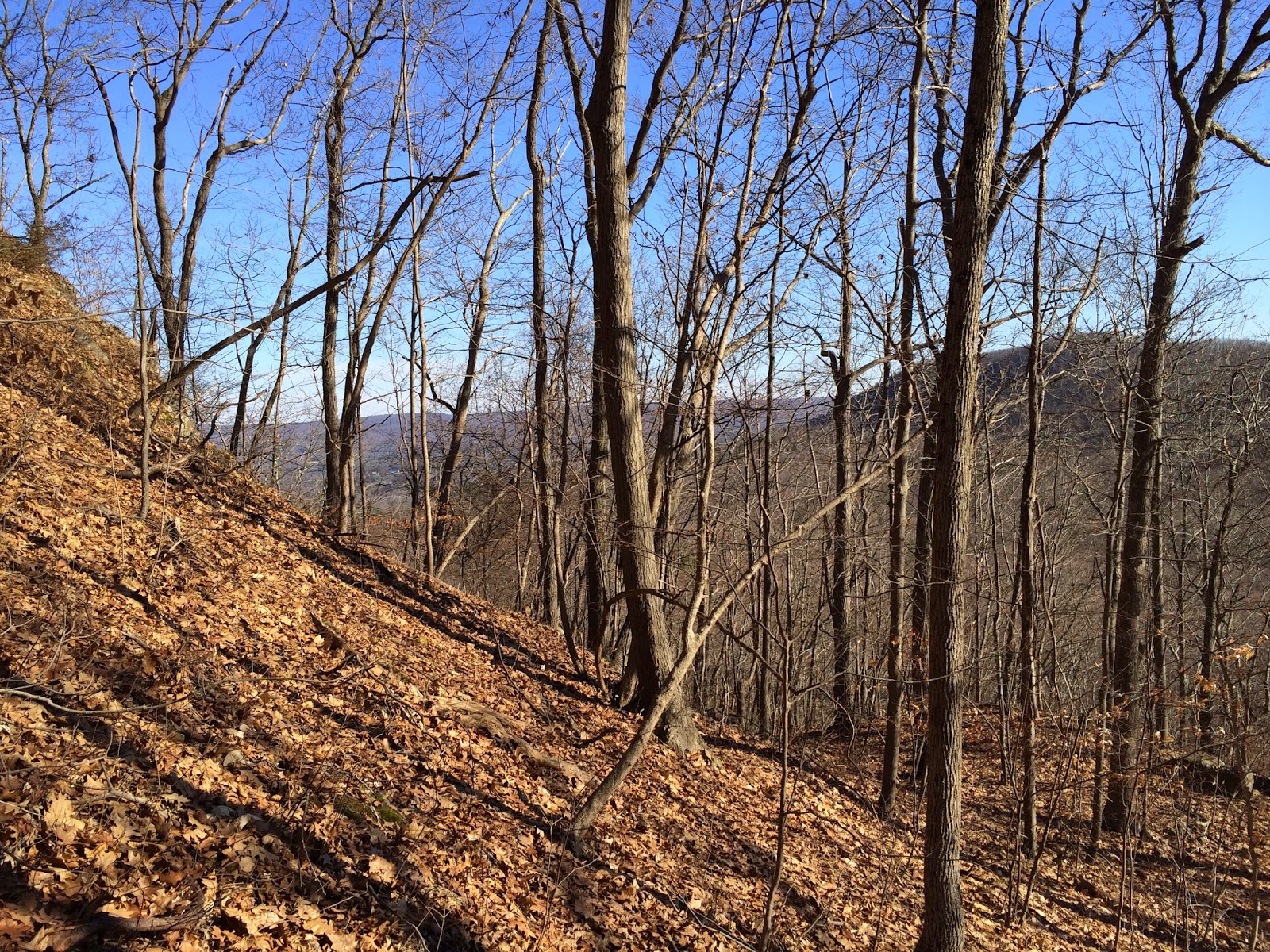 The final climb to Rattlesnake Knob is a steep ascent that ends in two excellent views--one east to Long Mountain and the other north into the Town of Amherst. 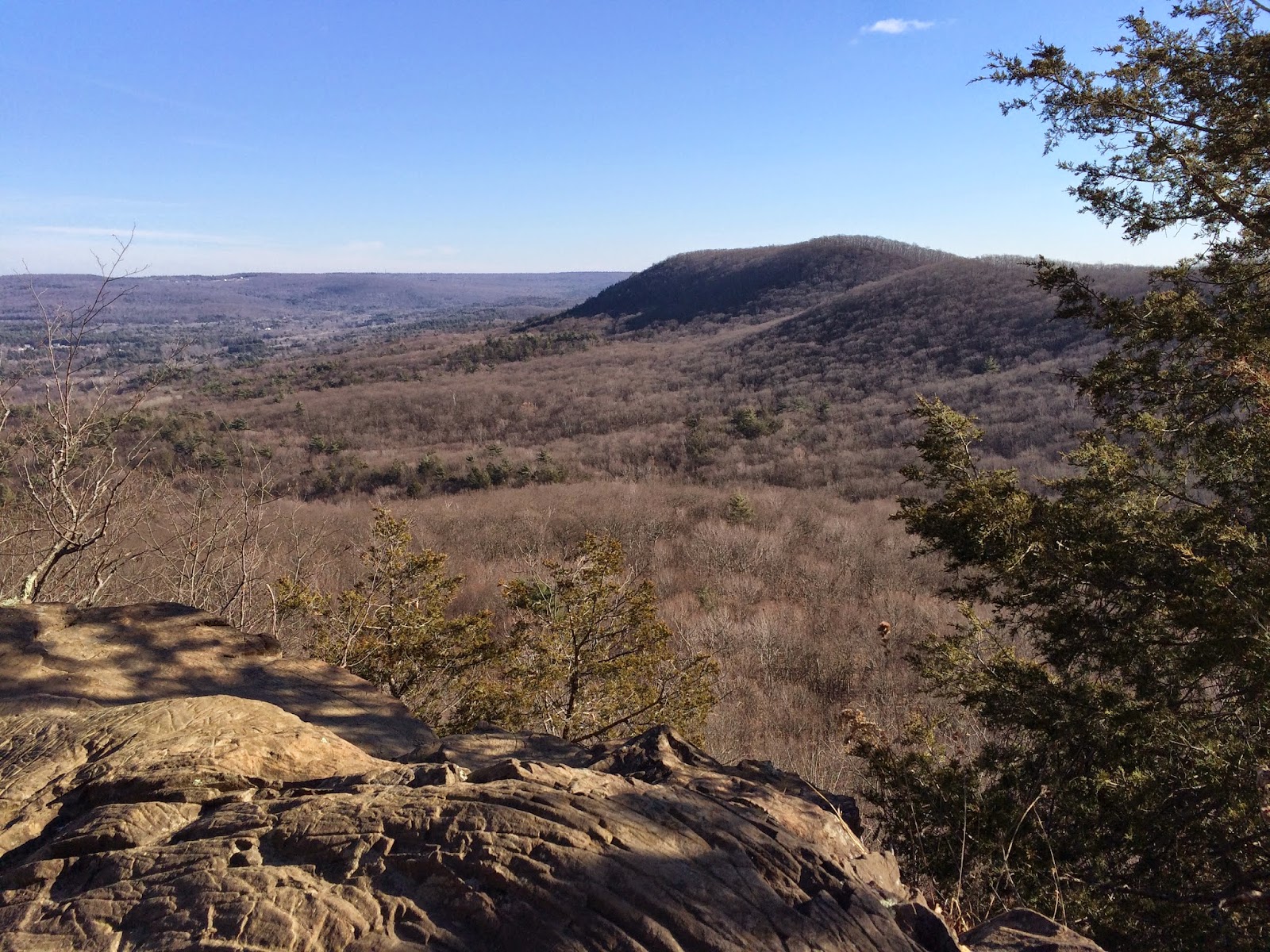 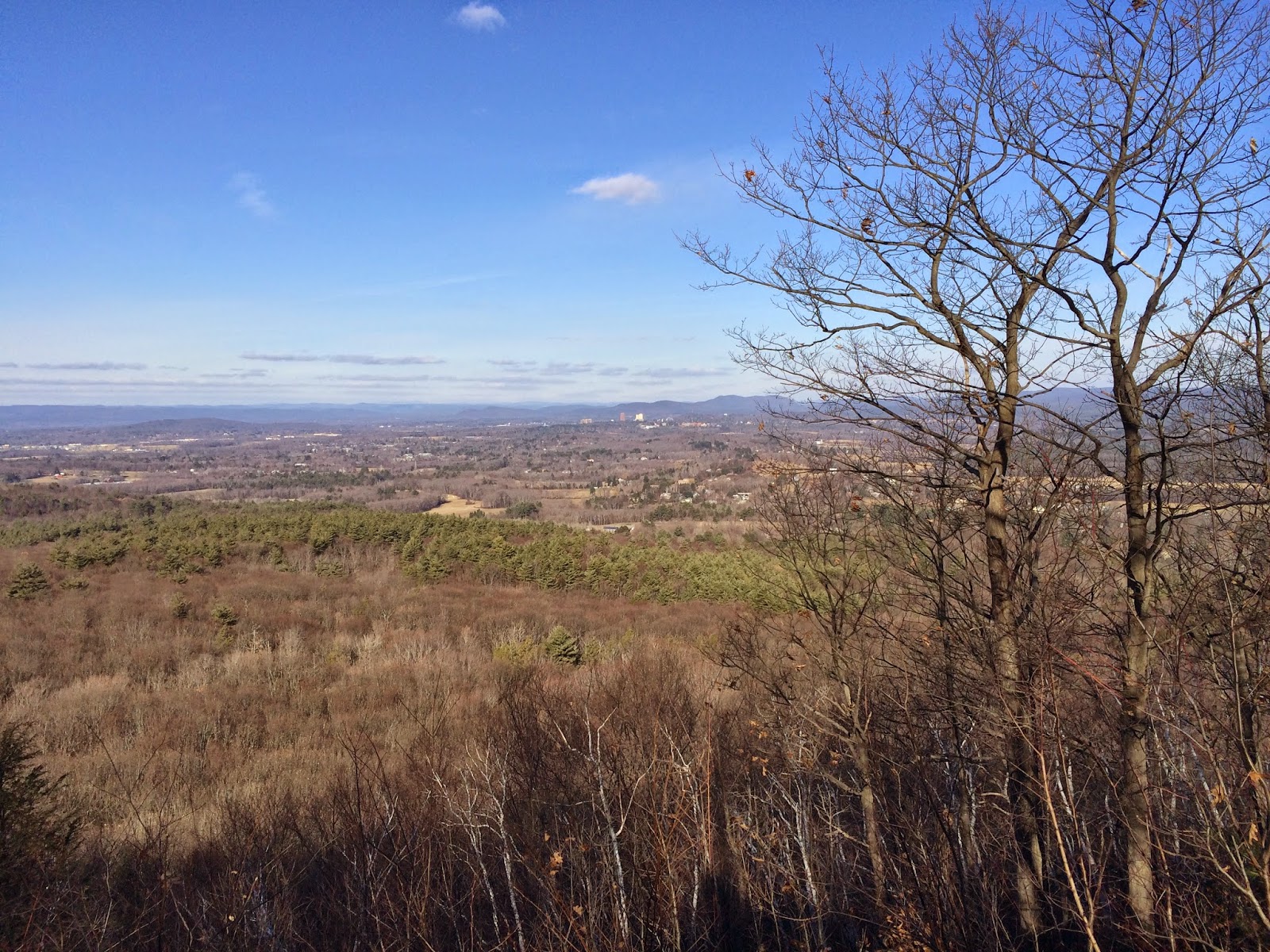 The short spur trail that I took meets the 114-mile Metacomet-Monadnock Trail. I have yet to tackle the whole route. 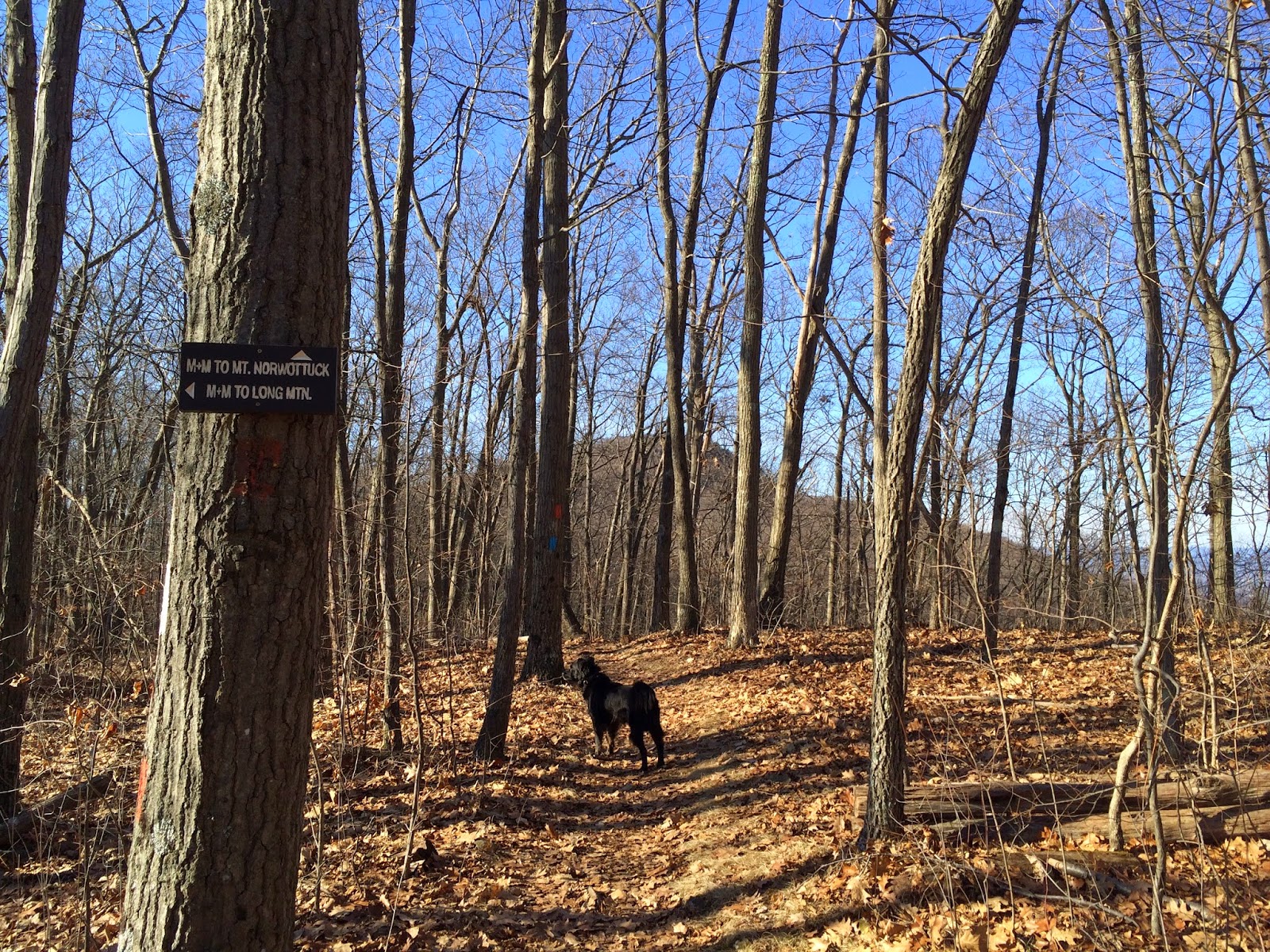 Baby Carriage Brook is a lovely mountain stream that flows along a portion of the trail (or more appropriately stated the trail follows alongside the brook for a bit.). The water is clear and cold and laughing as it wanders through the woods down the mountain slope. In spring its banks are dotted with skunk cabbage, ferns, and false hellebore. 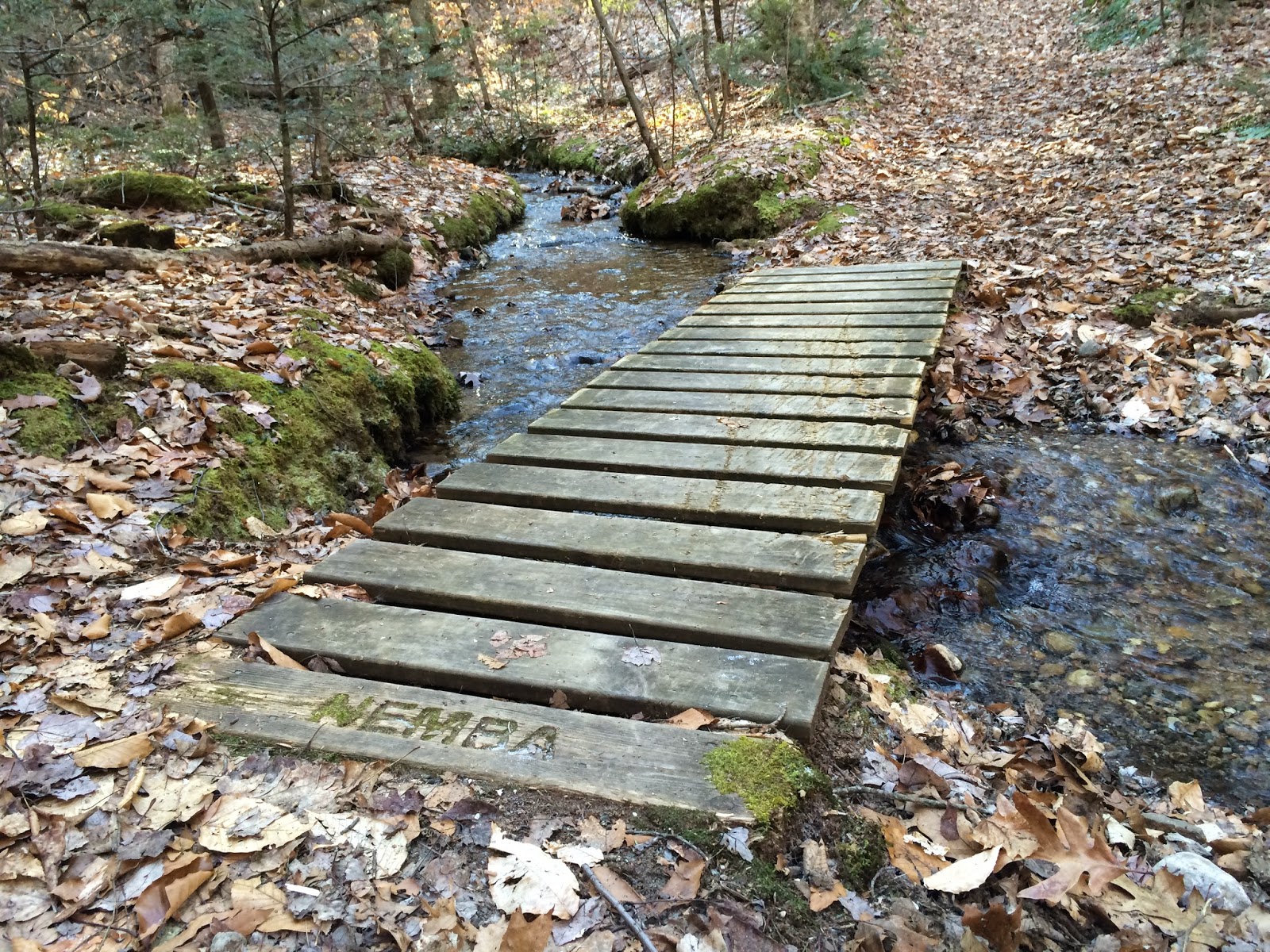 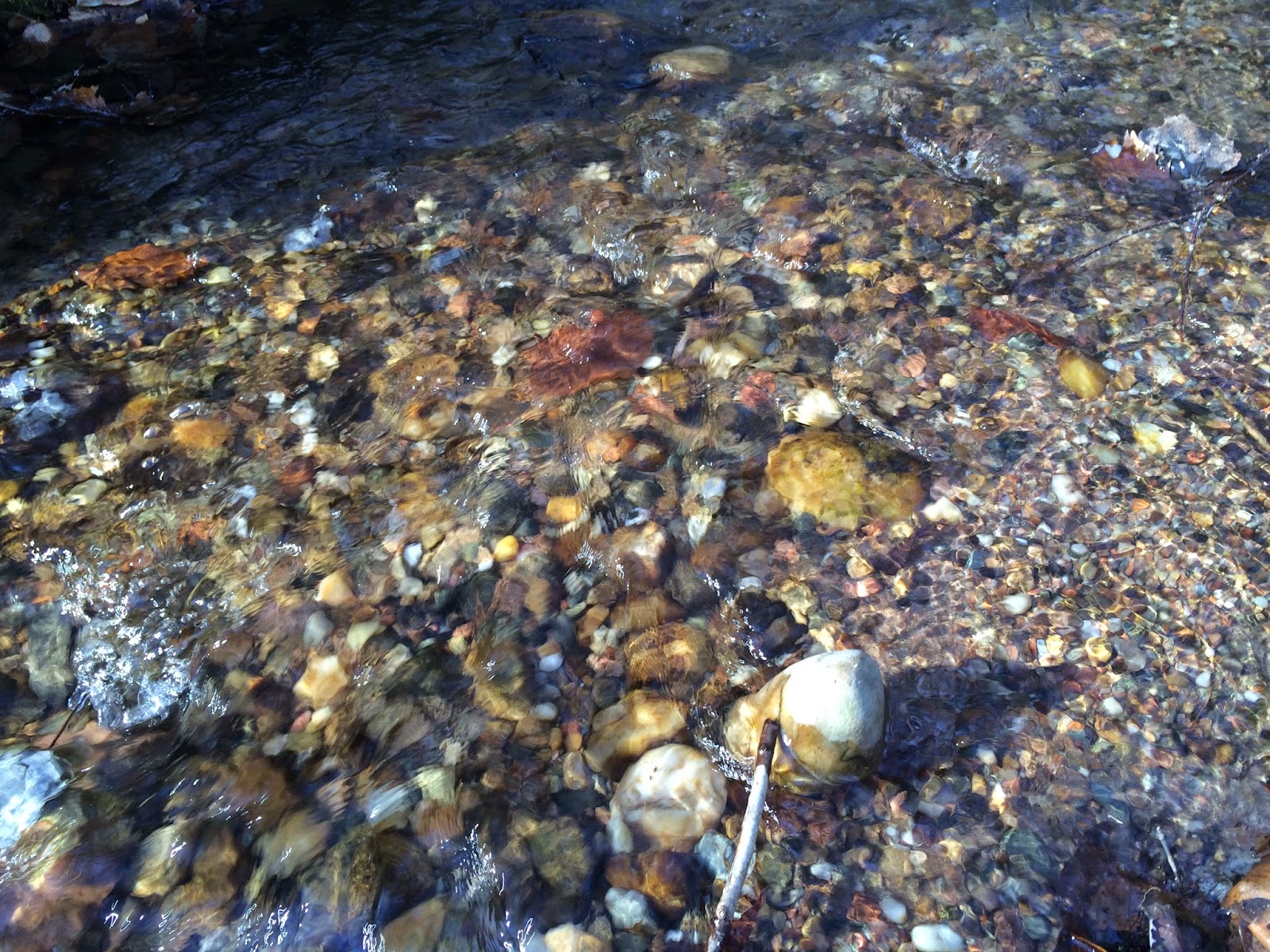 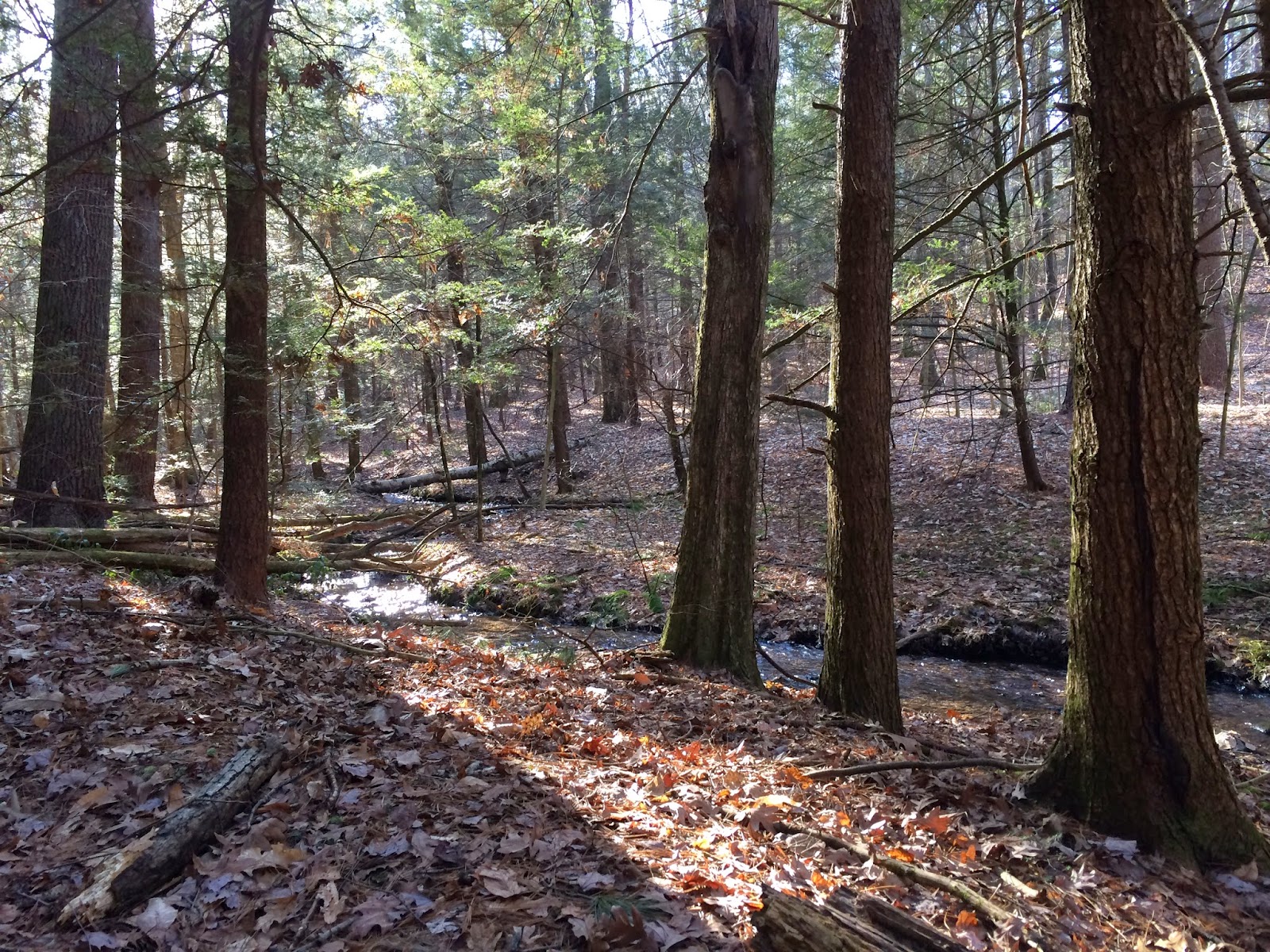 The only clear indications that it is winter and New Year's Day, was the temperature, which hovered around 28 degrees Fahrenheit and also the ground was frozen enough to make for easy hiking. A slight breeze, blue sky, sweet clear air: a refreshing and wonderful start to 2015.
at January 01, 2015 No comments: