Under an incredibly beautiful sky, with perfect temperatures and a light breeze, my nephew Sid and I went on a Granite State Whale Watch yesterday morning from Rye Harbor. 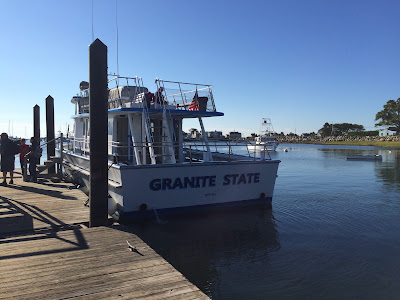 Our destination was Jeffrey's Ledge, about 20 miles offshore, beyond the Isles of Shoals. Not long after passing the islands our captain slowed and gently maneuvered the boat to bring us close to a basking mola or ocean sunfish. What a curious fish. 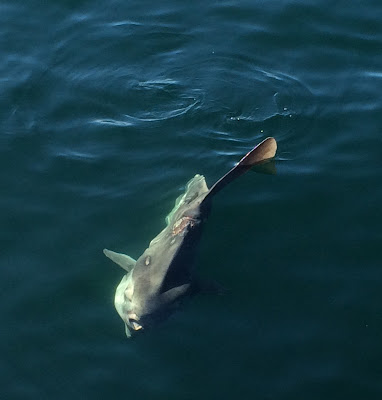 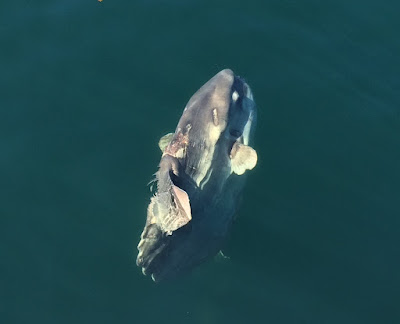 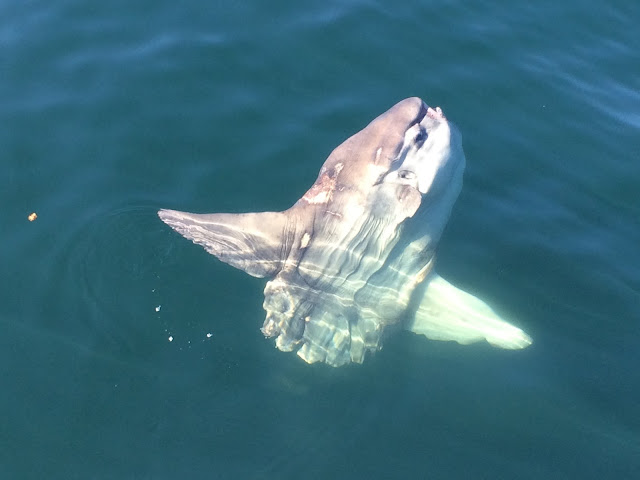 They appear to have only half a body. Females lay more eggs than any other vertebrate in the world -- an average sized mola may have as many as 300 million eggs. Each egg is tiny, but after hatching it grows into the heaviest bony fish in the ocean. The name ocean sunfish comes from its habit of basking on its side at the surface, in part, to allow birds to pick off the very large number of parasites on their body. They keep their mouth open at all times, chasing their favorite food: sea jellies (jellyfish). To our delight we saw four of these wonderfully odd fish yesterday, each about the size of a large dining table. 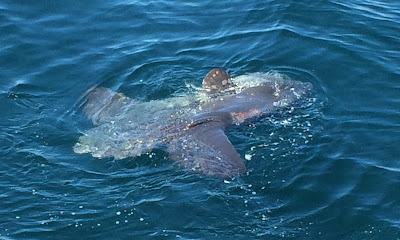 We never made it to Jeffrey's Ledge as the wildlife watching was better just 14 miles offshore in an area where recreational bluefin tuna anglers were congregated. We spent several hours among the fishing boats watching three different humpback whales surface for air and then dive to feed. All three whales were identified as Highlighter, #0050, and Quill by their dorsal fin and tale patterns by our knowledgeable onboard naturalist Melanie White from the Blue Ocean Society. 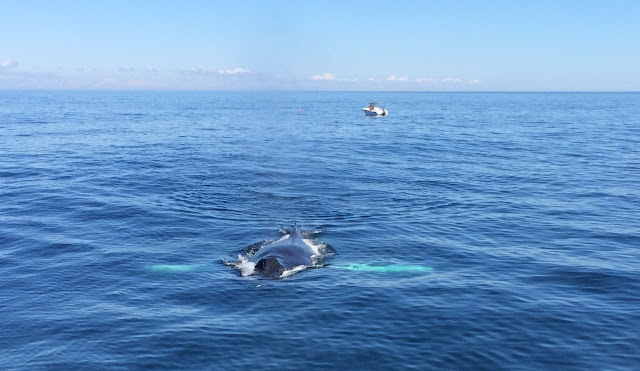 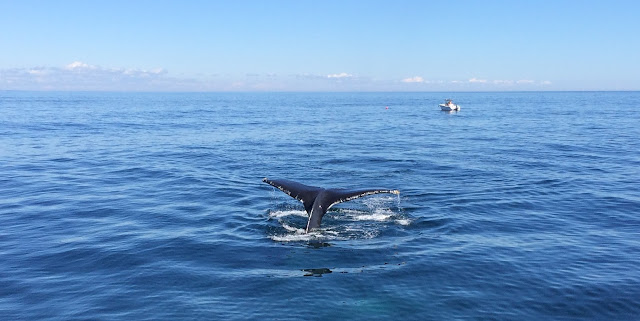 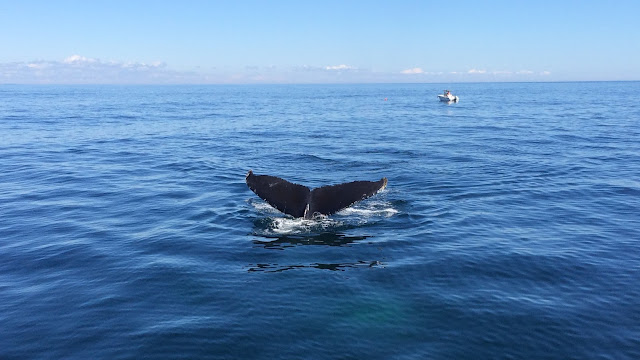 After a while we motored north and farther out to search for other whales and sea life. One minke whale surfaced and in our travels we saw four sleek blue sharks up close. The relatively calm ocean with swells of less than two feet enabled us to easily pick out the small dark fins of sharks, sunfish, and whales. We had not expected to see sharks, so an added bonus to a wildlife-rich day.

We watched hundreds of Wilson's storm petrels--a small dark brown seabird with a white rump--skip across the water picking off small invertebrates just below the surface. These petrels are summering here then head south to Antarctica where they breed in November-December. A greater shearwater lifted off from the water as we passed, flying gracefully on its long slender wings just above the swells. Cormorants, black-backed, herring and ringed-billed gulls, common terns, common eiders, and a few harbor seals were sighted as we traveled to and from Rye Harbor.

What a lovely day to be on the ocean.

Mt. Chocorua is a popular hike in the White Mountains, especially on a beautiful Saturday in August. To avoid some of the high traffic, we arrived at the Champney Falls parking area off the Kancamagus Highway by 8:30 am. Surprisingly we were only the third car. 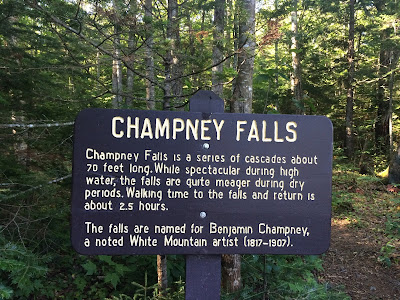 Rainfall has been light of late so we expected little flow in Champney Brook and over the falls. But water flowed continuously over the falls filling the brook below with plenty of clear, cold water for Henna and Kodi to cool off and slake their thirst. 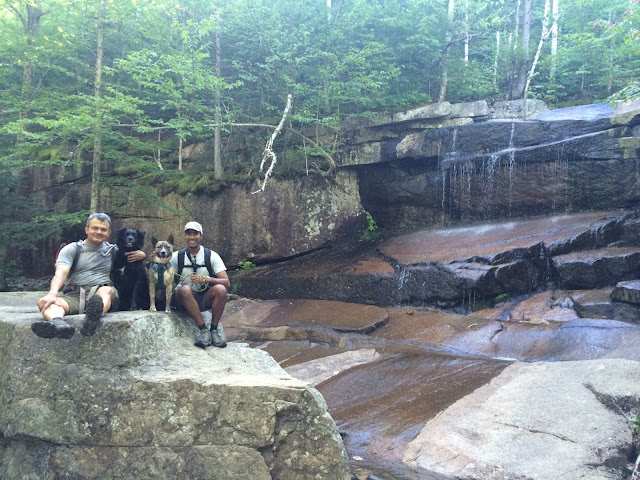 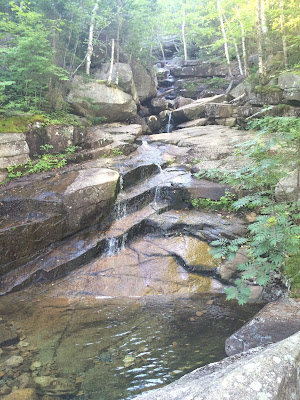 The loop trail leading up and away from the falls back to the main trail has a well-built series of steps--easy in summer and a very different scene in winter. 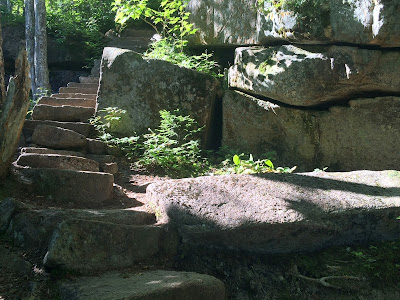 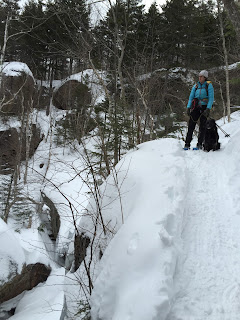 Although seemingly more treacherous in winter and when icy, summer presents dangers too. As we descended from Mt. Chocorua after lunch, a hiker was running up asking for an EMT and trying to get cell coverage as one of his friends had fallen maybe 30 feet at Champney Falls and was badly hurt. As we continued our descent a rescue crew was hiking in with a stretcher and the parking lot, now overflowing with cars, was also an incident command center. We hope the young man who fell is okay.

We encountered only a dozen or so other hikers on the way to the summit of Mt. Chocorua. A series of switchbacks provides a lovely view north to the High Presidentials; only the tip of Mt. Washington was in the clouds. 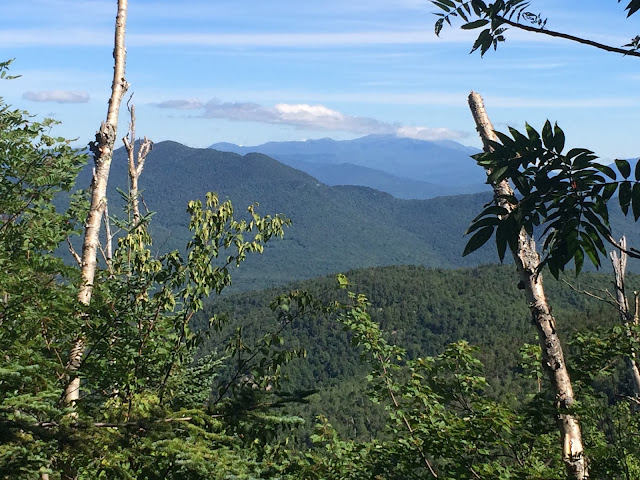 It was a spectacular day to be up in the mountains on a high peak: temperature in the mid 70s, no bugs, mostly blue sky with beautiful cloud formations, no haze. 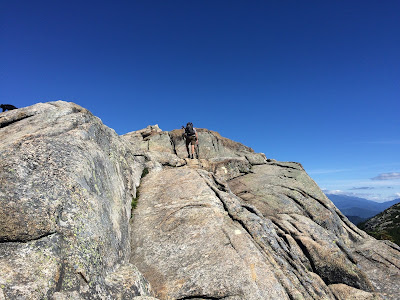 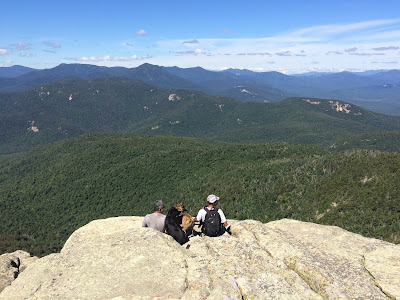 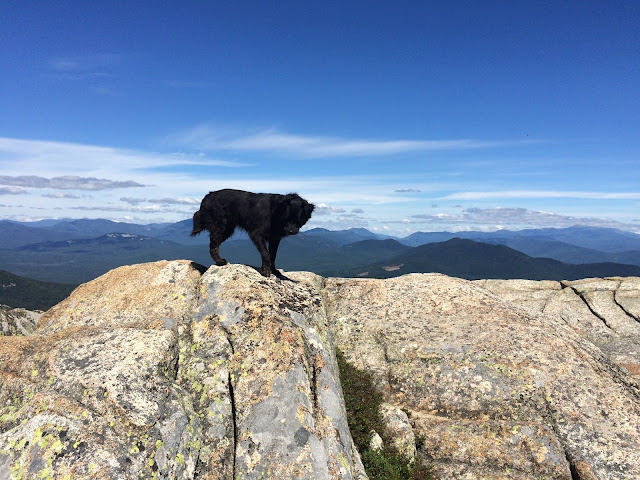 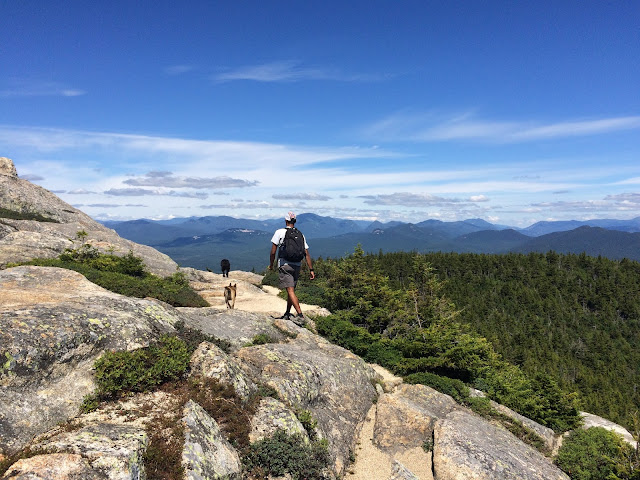 We reached the summit by 11:00 am and by then many more people were arriving. After a snack on top we headed down and over to Middle Sister for lunch, where we enjoyed a quiet and lovely view all to ourselves. Here is a look back at Mt. Chocorua on our way to Middle Sister. 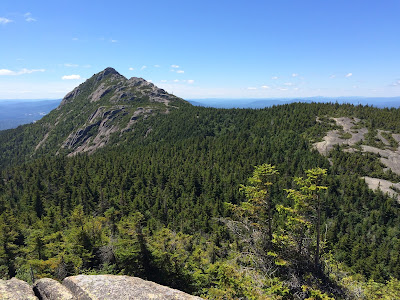 Kodi enjoyed the hike and the scenery. 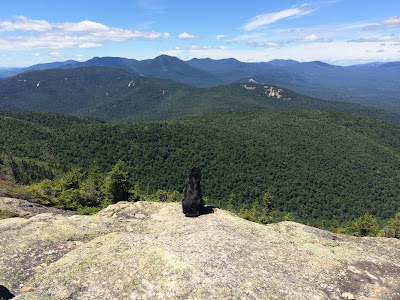 There was a hint of fall in the air. The weather felt a bit like early September and the hobblebush were starting to turn color. 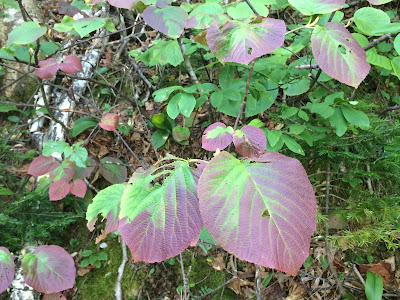 Last weekend we harvested our garlic crop at my parents homestead. We've lost count how many years now that we've been growing garlic….but every October we plant nearly 500 bulbs and every July we pull nearly the same number out of the ground. 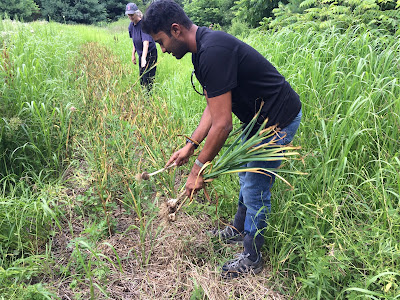 My sister Amy and my nephew-in-law Sid from India pulling this year's garlic crop.

We sort the bulbs into large, medium, and small. The large are saved for the fall planting. The smalls are used first, and the mediums--which make up most of the crop--are dried and used all year long, until next July. 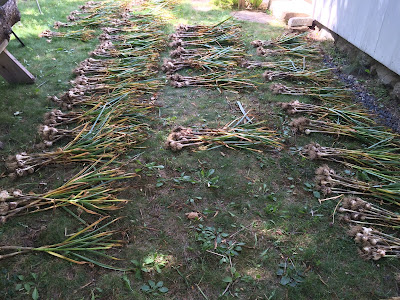 Garlic is a very easy crop to grow. We rely on a covering of straw for weed control and the weather for watering. We spend a day or so prepping the rows and planting the cloves and then less than a day harvesting. And that is it. Easy. 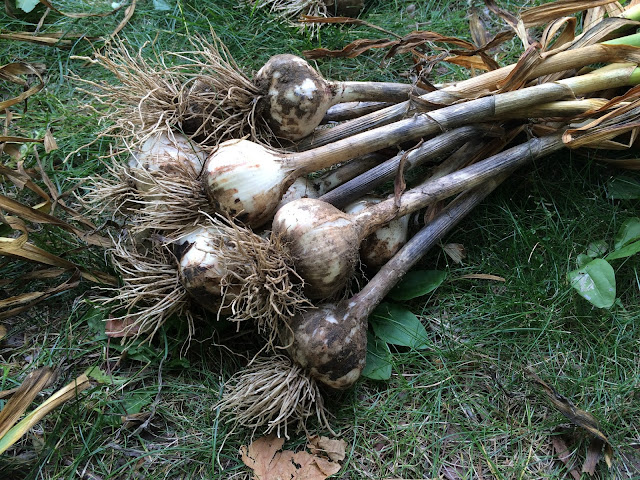