Sometimes it is about what you don't see.

In their article Early Bloomers in the New York Times on Wednesday the authors noted the change in first flowering dates of many plants. They compared Henry David Thoreau's observations from Concord, Massachusetts in the 1850s to the flowering period of the same plants today. According to this comparison, the highbush blueberry shifted its bloom time from mid-May in the 1850s to early April in 2012. A shift of six weeks.

The authors--Richard Primack, Abraham Miller-Rushing, and Becca Stadtlander--also noted that other plants have shifted to a much earlier bloom time, including shadbush and marsh marigold. This caught my eye as I had just written about those two plants in my blog that very day. Specifically, that they were blooming early here in our neck of the woods. After reading Early Bloomers, I realized that I'd seen quite healthy flowering populations of marsh marigolds and shadbush this year. 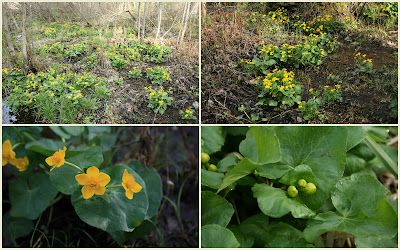 And here is the interesting link between climate change and these changing bloom times. One would think that these plants that are shifting their flowering times so dramatically would be the vulnerable ones. The reverse might actually be the case. Some plants seem to have not changed their bloom time at all or very little. It is these species--the ones that are not adapting to changing conditions--that are likely the most vulnerable. The bloom time shifters seem to be healthy. The static bloomers not so good.

Many plants from Thoreau's Walden Pond have disappeared already--from habitat loss, pollution, roads and development, heavy deer browsing. As species flame out their habitat is taken over by invasive species such as purple loosestrife and garlic mustard or by species adapted to southern climes such as sweet pepperbush and silky dogwood.

All species need to adapt to changing environmental conditions. The great worry is that climate change is occurring at such an unprecedented rate that some species are not able to adapt quickly enough, especially when confronted with all the other human-imposed land use pressures. Some number of these species will disappear, perhaps unnoticed. Other flowering plants--desirable or not--will take their place.

After awhile we will fail to notice what is no longer there. Will these disappearing plants be missed by us? By bees or birds? Or some other tiny insect that we do not yet understand? 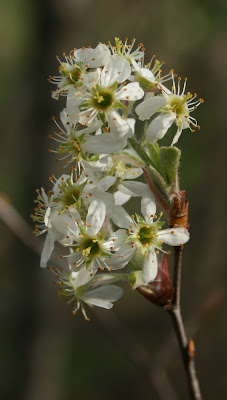