Once in awhile I see a dead beaver on the road, the result of a roadkill. The poor beaver was probably dispersing to a new territory in spring, as the two year olds do. They leave their birth wetland and lodge to find their own drainage after spending two years with their parents and their one-year old siblings. Beavers, like most animals, do not like to crawl through dark culverts to move upstream or downstream. Instead, they waddle onto a road at night and attempt the crossing.

Last weekend I found a dead beaver in its own wetland. That was a first. I noticed something floating at the   dam on a large beaver pond along the Sweet Trail in Durham. A boardwalk parallels the downstream side of a long, impressive beaver dam. The beaver dam is at such a height that I was nearly at eye level with the ponded water. I looked over and saw something furry floating in the water--the dead beaver.

My young niece was with me so together we poked the beaver with a stick. The beaver was bloated, but otherwise looked healthy. It even had a small bunch of green vegetation clutched in its teeth. The day was windy and I think the waves pushed the beaver toward the dam. It could have died anywhere in the wetland. But why did it die.

Here is a photo of the beaver. Note the notches in the tail. I wonder if those were caused by a snapping turtle. They seem unusual, although I think had nothing to do with its death. 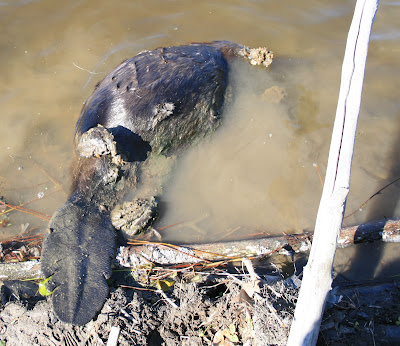 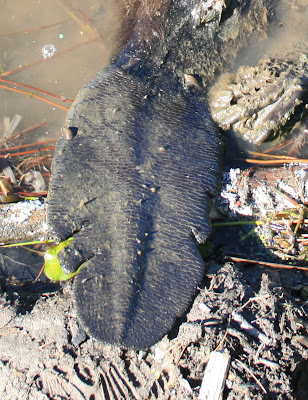 My niece was intrigued by the flat, leathery tail. For the rest of the walk she talked about the beaver and other dead animals we've found together--a skunk, a raccoon--and what one could do with a beaver tail. Her young, creative mind was so absorbed with our beaver find, that she forgot about the hike itself and in no time we were back to the car.
at April 10, 2012